The Prince of Silicon Valley: Frank Quattrone and the Dot-Com Bubble 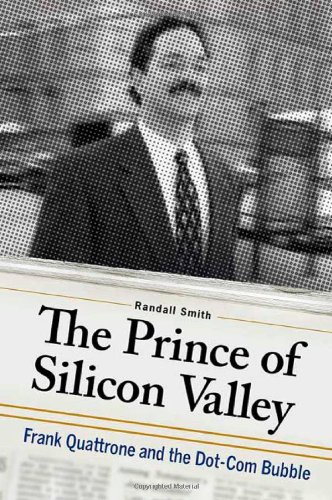 After all the pain of recession that we’ve been through, it’s a bit hard to remember that there was once a dot-com boom era in which high-tech startups found it amazingly easy to find financing, and then to make quick fortunes by going public. We were all part of it. “I am investing in one new company every week,” said one venture capitalist to this writer way back in 1999 (unfortunately the company this writer proposed wasn’t among them).

There was some reason for the boom, because the Web had created a new commercial space that needed to be filled. One of those startups, eBay, went public seeking $63 million in 1998. In a matter of minutes it not only sold off all its initial public offering, but the stock price also tripled. eBay has survived—its concept was viable—but many of the companies that got rich quick at the time fell by the wayside. Who remembers Lycos (which actually still exists), or boo.com, which made a huge noise and then quickly wound up signifying nothing?

There was a lot of chatter at the time about calculating EBIT, EBITDA, and how these nascent companies were going to deliver value to the shareholders. Confidence finally reached its term on March 10, 2000, when the correction to the inflated stock prices the dot-coms were enjoying finally came—there was no Nouriel Roubini to crow at that time, but a hoard of analysts claimed to have predicted doom in advance.

The Prince of Silicon Valley is a book that is intended to focus on one of the key investment bankers who fueled the boom. Frank Quattrone, at Crédit Suisse First Boston, was indeed one of the most important of these.

His story is, unfortunately, not told in the book, because the author has not interviewed him. One supposes that Quattrone declined to be interviewed, although Wall Street Journal reporter Randall Smith does not says so. All we get from Quattrone himself in the book are a few recycled quotes.

That fact, along with the unbearably tedious style in which it is written—“His own visions of this greatness seemed to have blinded him to the risks that the powerful market tide he rode could turn against him”—makes the book of very little interest to the general reader. The usual parallels with Greek myth, hubris, Achilles, etc. all get cited (one hopes that, somewhere in hell, the business writer who came up with overused clichés is being forced to read trade magazines unto eternity).

If, however, you are a student of investment banking, or a historian, and thus have a professional obligation to learn about what happened during the dot-com boom, you will find plenty of meat in the book. Quattrone was, after all, the first investment banker to recognize the value of this kind of high-tech startup—he was at it when he started with Morgan Stanley where he insisted that they let him operate in Silicon Valley, instead of making the traditional move to New York.

By managing the IPOs for companies like Silcon Graphics, which started out as tiny startups but which grew up to be giants in their fields, Quattrone took Morgan Stanley to the top of the charts for these deals. Moving to Deutsche Bank, he launched deals like Amazon.  There are a few nice characterizations in the book, as when Amazon CFO Joyce Covey holds a bake-off to celebrate the IPO.

The book chronicles Quattrone’s move to CSFB, portraying some of the drama that built up between the bankers as he recruited most of his “dream team” to go with him.

What the book does not have is much about how the big deals were made, although there are comments gleaned from some interesting conversations, and many of the stars of Palo Alto banking circles appear as bit players in the various negotiations around both the deals themselves, as well as the moves from one bank to another.  What is well chronicled is what Smith calls “the highly evolved system of back-scratching and favor-trading that flourished during the bubble.” Quattrone had all kinds of perks that he used to entice executives to work with him.

It was that system of perks and favors that got Quattrone in trouble, although only after the bubble burst.  The book traces the complex legal scenario that got him tried for obstruction of justice. He was convicted, but the conviction was reversed on appeal. It is difficult to make a trial seem dull, but Smith has accomplished that. However, historians will be grateful for the details.

Quattrone is now back doing deals again with his own company. If we were running a high-tech start-up now, I’d want to talk to him, particularly now that obtaining funding is so tough. One can only hope that, one day, he will tell his own story. Many analysts predict that another high-tech boom will arise when things get better. Certainly, by reading this book, bankers could avoid some of the mistakes made at the end of the twentieth century.

Do you really think they will? We don’t.