Prince Lestat and the Realms of Atlantis: The Vampire Chronicles 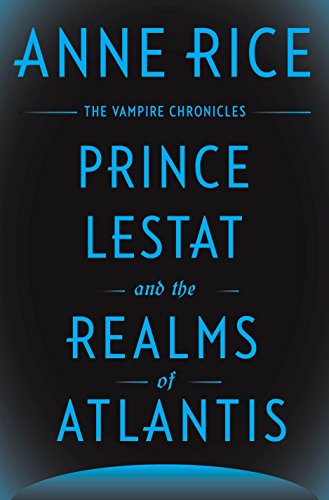 Perhaps because of its length as well as its subject matter, a summarization of Prince Lestat and the Realms of Atlantis can in no way do justice to its plot.

Lestat is now Prince of the Vampires, struggling to bring organization to the scattered numbers and stop the taking of “innocent blood.” He has also been possessed by an entity called Amel, an ambivalent relationship, because both host and parasite wish to be free of each other. The only problem is that Amel exists to some extent in all vampires; if something happens to Lestat, all experience it and for Amel to leave his body, all vampires would cease to exist.

A consummation devotedly to be wished, except that vampires under Lestat’s leadership are attempting to keep a low profile and not be a threat to humankind.

Against this backdrop is played out the struggle of a revenge-seeking vampire and the discovery that there are non-human entities, the People of the Purpose, posing a possible threat to the Undead, creatures somehow related to Amel. They’ve been sent by an unknown power, the Parents, to destroy human life and let evolution begin again, to have a species besides Man become dominant as has happened on other worlds they control.

Once on Earth, however, in a place called Atalanaya, that which history knows as Atlantis, the creatures become so enamored of mankind they no longer wish to fulfill their mission.

When the entities finally meet with Lestat, a deception is discovered. The Parents may want to destroy the most prominent species on Earth but in the meantime, they are enjoying its suffering because “no creature in the universe suffers like a hot-blooded self-aware mammal.”

The entities vow to protect the Earth, not destroy it, and part of that protection involves releasing Amel from his prison within Lestat’s body . . . without killing anyone.

Can it be done? Will Lestat risk his existence and those of his subjects and allow it, opening the way for benevolence for all Earth’s inhabitants?

Followers of the Vampire Chronicles will be familiar with the characters and events leading up to this novel, but for the uninitiated, the old adage, “You can’t tell the players without a program,” will ring more than true. In spite of the insertion of a History of the Blood Genesis and a mini-dictionary of Undead argot before the novel and two appendices afterward, consisting of a Dramatis Personae and a chronological bibliography of the series, it’s still difficult to tell who’s who a good deal of the time without continually referring to these listings.

Like Gaul, the novel is divided into three parts, with the sections dealing with the People, namely in Part I and most of Part III, having the most “action.” In the rest, the vampires simply congregate and discuss the problem, stating and re-stating it in long discourses. Indeed, there’s very little actual “vampiric” activity going on; replace the vampires with ordinary mortals and this could simply be an aliens-among-us science fiction novel. In some places, it gets so philosophical as to become bogged in near-metaphysicality, with an emerging truth relating to any inhabitant of this Earth:

“I told them no confraternity or sodality had ever been made sacred except by the faith of those who formed it . . . I told them all that we were children of the universe no matter who thought otherwise, that we lived and breathed and thought and dreamed as do all sentient beings, and no one had a right to condemn us, or deny us the right to love and to live . . . the Devil’s Road had never been easy or simple, and those who travel it did so because they cared about something greater than themselves . . .”

Prince Lestat and the Realms of Atlantis may encourage those who dropped the series following the release of Queen of the Damned to return to read the other stories. Buried within the verbiage and reiterations there’s a message—if only it hadn’t been delivered quite so pedantically. It does ask one question that is both easy and difficult to answer: Who says you have to be human to have a soul?

In his final speech, Prince Lestat sums it up beautifully: “This is our universe. We too are made of stardust as are all things on this planet; we too belong.”

Prince Lestat and the Realms of Atlantis will undoubtedly win Rice new fans and welcome back old ones.