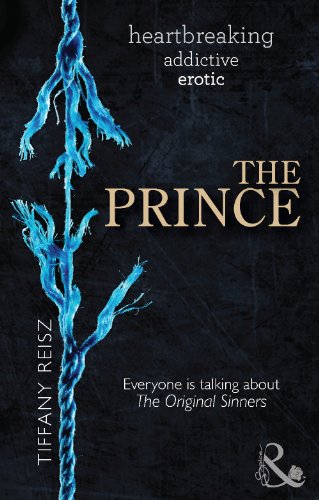 “. . . written with unusual tenderness and grace. . . . Everybody’s damaged . . . and love is never as simple as chocolate or vanilla.”

This third installment of the Original Sinners series hits hard, but will leave readers begging for more.

But he’d never left her heart.

Søren is determined to find out who is after Nora, and Kingsley, his oldest friend and former lover, is there to assist. In every way. Adding a darker layer of kink to her thrilling series, Ms. Reisz writes harrowing scenes of Søren’s domination of Kingsley while they attended a Jesuit boarding school years before.

Kingsley would do anything for Søren’s attention back then, regardless of the pain Søren inflicted. Yet there was no denying the obvious love Søren felt for Kingsley, the only person who understood his need to hurt in order to experience pleasure. In a twist worthy of Heathcliff, Søren married Kingsley’s sister as a cover for the men’s forbidden passion. Suspicious about why her new husband never touched her, she caught the men together and ran off into rough terrain. Her remains were found crushed against a rock. Søren retreated into the priesthood, while Kingsley created an underground sex club in New York.

There’s a lot going on between the present, the past, and Nora’s visit to Kentucky. Nora is worried about whether Wes’ wealthy parents will accept her, while Wes hopes her reputation is limited to New York. Of course his father knows all about her, and Nora is fearless as she acknowledges his suggestion that she’s nothing but a whore.

Every attack on Nora’s character strengthens Wes’ devotion to her. Their scenes together are written with unusual tenderness and grace.

Meanwhile, in Nora’s absence, Kingsley tempts Søren with memories of their past trysts. As a priest, Nora has been Søren’s only deviance from his commitment to God. But Kingsley is clever, and suggests God tried not to watch when they were together. He reminds Søren that he’s stronger than Nora, how much more pain he can handle. As the tension builds, Ms. Reisz ends the explosive chapter with a last line brilliant in its simplicity: “God closed His eyes.”

Nora’s time in Kentucky is filled with the promise of conventional love; a sharp contrast to her life with the sadist priest. Tiffany Reisz’ ability to make us seriously consider which life Nora should chose is testament to her maturing skill as a writer. She makes sure we adore Wes as much as Nora does, but she won’t let us forget how intricately Nora is bound to Søren.

The most challenging of all her characters, Søren evokes fear and pity while projecting strength and dominance. The combination is deeply unsettling.

Everybody’s damaged in Tiffany Reisz’s world, and love is never as simple as chocolate or vanilla. Yet her characters are imbued with such humanity that we want the best for all of them. Except perhaps for Kingsley. Things get scary when he starts knocking at the love triangle’s door. And he’s not the only one with an ax to grind.