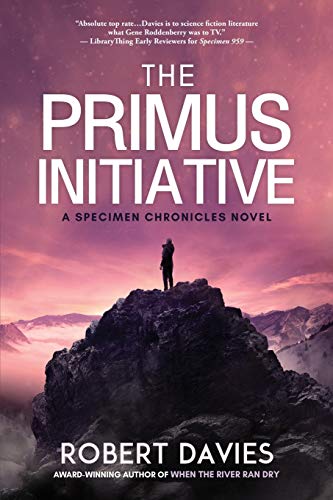 “a long walk through thick underbrush, but the payoff is worth the trek.”

A galactic menace called the Namadi Fire Ships are arriving soon to utterly destroy all civilizations in this sector of the galaxy, that is unless a daring, multi-species operation can stop them in time. Darrien Norris and his wife Onallin Rantara lead the team of commandos to a far distant world to find the data that will help them destroy this enemy. Will they get there in time and will it be enough?

This is the third book in the Specimen Chronicles (the first is Specimen 959, the second Echoes of Esharam) and if the reader picks this one up first, they can expect to become lost in a series of well-developed characters with their own complex backstories. Add to that a convoluted plot, an immense universe of races, bucket loads of politics and intrigue and the reader might need some downtime away from the book to comprehend the enormity in order to follow the story. However, a little patience and some careful thought will fill in the gaps.

With that said, the characters of the human Darrien Norris and the alien Onallin Rantara (a humanoid species called Khorran) are rich and well thought out. Davies has spent enough time with them to bring them to life for the reader, which lends richness to a complex story. That’s not to say the secondary and tertiary characters are throwaways, a fault common to many writers. No, the other characters are fleshed out just enough for the reader to become engaged in their welfare.

This is no easy read, not in the Alan Dean Foster or Edgar Rice Burroughs sort of way where the prose flows easily and the action comes at the reader fast and hard like an out-of-control mack truck. Davies’s prose tends to be dense, thick enough to be a bit of a slog despite the richness of the background setting, which can turn off some readers looking for something a little lighter.

There is action. There is adventure, sure. Tons of it, in fact, but it is couched in the same dense writing style as the plot exposition and this makes even the exciting parts a bit of a chore for the reader. That being said, the ideas found in The Primus Initiative are fun and intriguing enough do drag the reader in allow time to fly as the pages turn. Although the Namadi Fire Ships are reminiscent of Fred Saberhagen’s AI Berserkers, Davies has taken the concept and produced an engaging enough story.

It is a long walk through thick underbrush, but the payoff is worth the trek.