Prime Suspects: The Anatomy of Integers and Permutations: A Mathematical Sciences Investigation 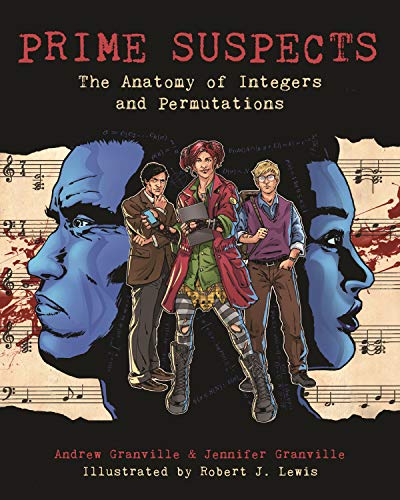 “This may require rereading to absorb some of the mathematical terms, but the book is fun, and interesting, and a challenge on many levels.”

Prime Suspects: The Anatomy of Integers and Permutations by Andrew Granville and Jennifer Granville will appeal to a variety of readers in a variety of venues.

That is not to say everyone will understand this unique presentation of mathematics as a crime solving tool, but it is an interesting take on mixing fact and fiction.

But where to start? As introduced by the Granvilles, “Integers and permutations are fundamental mathematical objects that inhabit quite distinct worlds though, under more sophisticated examination, one cannot help but be struck by the extraordinary similarities between their anatomies.” And therein lies the theme for this surprising and successful journey combining math and fiction.

For the mathematician who eats, sleeps, and drinks numbers, start on page one and just enjoy the story. For the reader who is okay with math, but still scratches his head at more intricate terms, keep the dictionary close at hand, but enjoy the graphics and the plot. For the reader who uses a pencil with a good eraser to balance her checkbook, turn to page 183 for your introduction to the book.

Once one masters the definitions, the formulae, the history of the characters, and the music of the story, then one can return to the beginning and perhaps get a better feel for the mixture of math and crime!

Granville and Granville have laid out an interesting plot upon which the story unfolds. Professor C. F. Gauss, his two students Emmy Germain and Sergei Langer, and Detective Jack von Neumann move down a variety of paths as they attempt to solve two murders using math. With Emmy and Sergei competing for the position of Professor Gauss’s research assistant, the tension rises and falls as each takes two steps forward and one step back as they apply their mathematical expertise to solve two murders.

The story starts with the discovery of Arnie Int (Integer), a lieutenant of the Integer Crime Family, and before they can even identify him for sure, another body appears, murdered in the same manner. But this is peculiar, because the second victim is a petite dancer, Daisy Permutation.

There is a pattern emerging here as characters take on the façade of mathematics terms.

As the story progresses, Det. von Neumann follows his own clues—his gut as he describes it. He leaves the mathematics solutions to others. Adding to the fun are Barry Bell, mainstream reporter and his “boom” assistant, Silent Bob, a man of few words. They follow Serge and Emmy around, gathering data for a soon to be released bombshell on the victims and the murders—or they think that’s what they are doing.

Needless to say, the story is based on mathematical calculations designed to find the killer as well as to establish the relationship between Integer and Permutation, a task that is completed after much pushing and pulling and calculating.

The characters are based on real people who have made their own mark in the world of mathematics.

The book’s illustrator, Robert J. Lewis, did a terrific job of designing a graphic novel with great features and dialogue blocks easy to follow . . . well, easier than following the math formulae. Lewis’s drawings of the characters often make one squint closely to see if these are caricatures of real people; they frequently look so familiar.

But coming back to the purpose of the book, as Jennifer and Andrew Granville put it:

“Our goal in Prime Suspects has been not only to popularize the fascinating and extraordinary similarities between the fine details of the structure of integers and of permutations, but also to draw attention to several key cultural issues in mathematics:

Now, some of us might fully understand item three, some of us not so much, but it goes without saying that their goals for this book have been fully met.

This may require rereading to absorb some of the mathematical terms, but the book is fun, and interesting, and a challenge on many levels.