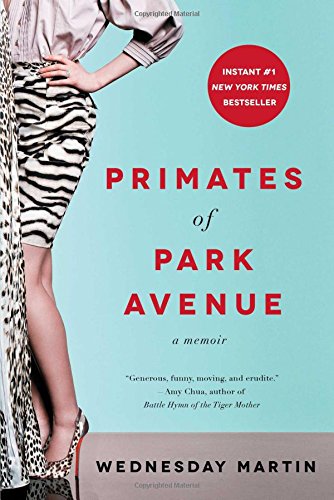 “Primates is a single-season sensation that does little more than titillate.”

Primates of Park Avenue, a runaway New York Times bestseller, has found a huge readership and been touted as the “beach read” of this summer. MGM won the film rights, and we can only wait to see who in the forthcoming movie will fill Meryl Streep’s shoes (The Devil Wears Prada) as paragons of elitist, secluded wealth and those who cater to it.

The book’s author, Wednesday Martin, is smart, a good observer, and a strong writer, but also left some timeframes unspecified and adjusted chronologies. Her publisher, Simon & Schuster, admitted this only after the New York Post conducted an exhaustive investigation of the “facts” in the book and exposed several inconsistencies.

Simon and Schuster said they would add a note to the ebook and subsequent print editions clarifying the “changes” Martin made. This renders her book at least part fiction and not entirely credible. This controversy has many reviewers suggesting the book be labeled “fiction” and not “memoir.”

Martin, with a PhD in Comparative Literature, cleverly identified a niche and used her amateur anthropological lens to exploit it. She is in good company. William Shakespeare mined this vein, too. Can you think of one Shakespearian play that does not revolve around characters of royal, noble, or otherwise “upper class" birth? The hardworking, everyday Jacks and Jills of the world have always had a fascination with those who make up the “elites.”

In the United States we idolize popular culture, celebrity, and money, and raise those who have “it all” to iconic perches no matter their often-bizarre behavior and sensationalized immorality. And we love to tear them down . . . we sate ourselves on their fall as portrayed in the media.

Martin does not tear down but pokes in a genteel, sarcastic Upper East Side way at the rituals, behaviors, and cultural mores of the value system of those in her neighborhood. After all she should know the Upper East Side; she lives there, her children attend school there, presumably she has friends there.

What then is she writing about? Behavioral patterns such as food gathering and eating habits, attaining and maintaining specific female body images, female mating rituals, ornamentation, accrual of cash and other commodities in competition to be an alpha female, parenting norms, and how male partners are sexually satisfied, in return for providing material resources for these same female behavior patterns.

Martin frames her narrative in terms of anthropological fieldwork. But her approach is far from serious primatology study. If you have read any of Margaret Mead’s painstaking research and careful fact checking or the anthropological pioneering work of, say, Bronislaw Malinowski’s The Sexual Life of Savages, you would know that exaggeration and sensationalism have no place in nonfiction.

But Martin does exactly that—exaggerate—and now she profits from those who live these truly exaggerated lives that existed in absurdly outrageous self-indulgence long before she shone a spotlight.

These exaggerations mar what is otherwise mainly an incisive social commentary that may have been a better book if fictionalized, such as Tom Wolfe’s Bonfire of the Vanities or Jonathan Franzen’s The Corrections or Donna Tartt’s The Goldfinch. These socially aware and consciousness-raising novels put entire American generations and their zeitgeist under scrutiny, and shake us to our very cores. Sadly, Primates is a single-season sensation that does little more than titillate.