The Price of Politics 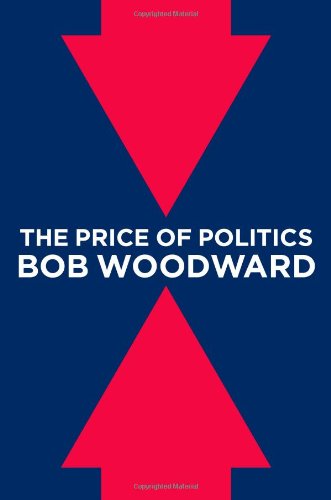 “. . . not a single character seems to have the slightest consideration for anything beyond what his or her peers demand.”

“Nearly all men can stand adversity, but if you want to test a man's character, give him power,” said President Abraham Lincoln.

Bob Woodward has set out in this book to show that nearly all the most important members of our government have failed that test. Most of the book portrays the failure of President Barack Obama, and his administration, to have led the country successfully through the debt crisis of 2011.

I cite Mr. Woodward: “It is a fact that President Obama was handed a miserable, faltering economy and faced a recalcitrant Republican opposition. But presidents work their will—or should work their will—on the important matters of national business. There is occasional discussion in this book about Presidents Reagan and Clinton, what they did or would have done. Open as both are to serious criticism, they nonetheless largely worked their will. Obama has not. The mission of stabilizing and improving the economy is incomplete . . . The United States is now facing what is now called the fiscal cliff . . . and the long-term problem of unsustainable entitlement spending on Medicare, Medicaid, and Social Security…has been left largely unaddressed.”

Mr.Woodward also chronicles what can only be called the fragmentation of the Republican Party from the time of the election of Obama.

As House Speaker (under the Republican majority) John Boehner tried to work out a deal to end the debt crisis with Obama, he was sandbagged by various factions within his own party—so that the dealmaking process on the administration’s side was anything but well-managed, but turned into low-level farce on the Republican side.

The book is a long, detailed recounting of what happened from the election of President Obama, as the administration, both ruling parties, and the Washington bureaucracy tried to manage the enormous debt that had been built up during the previous administration: at that time, about $12 trillion or 85% of gross domestic product.

Our leaders went from the extremely intelligent and useful solutions proposed quite early in the process by the Bowles-Simpson committee, and which were very rapidly discarded for the crudest political reasons, to a desperate stop-gap solution reached literally hours before the deadline on July 31, 2011, which was barely functional and pleased nobody.

Mr.Woodward takes a “Barbarians at the Gates” approach to the narrative, meaning that he held long interviews with nearly everyone involved (I think the qualifying “nearly” probably isn’t necessary as he has plainly spoken to everyone and his brother; at one point Mr. Woodward cites an email from the president’s personal assistant to the girlfriend of a Congressional staff member). Using this saturation reporting, he reconstructs the thought processes and strategies of the characters at times, and his method is perfectly plausible.

What it does show, however, is that our leaders in Washington have little personality, certainly not nearly as much as the business leaders whose characters are anatomized in “Barbarians.” One hopes that they have more heart than wit. Here’s a telling quote:

“Whoa! What was this new aggressiveness on the part of the Democrats? Where had it come from,” Cantor thought.

Let’s be bipartisan, and cite President Obama on former House Speaker Nancy Pelosi: “Nancy has always been there for us; she is absolutely nails.”

Although the book begins with clever speech that then Senator Obama makes at an elite Washington gathering, you will look vainly through the remaining 480 odd pages for any more memorable remarks. Nor will you find any from the seven Senators, nine Representatives, the Vice President, the Secretary of the Treasury, or from their distinguished staff members, or the former elected officials cited in the book. It is good to know that the politically supreme are also supremely dull.

The one thing they do which is not dull is to make deals, and that is what most of the book is about. No other book takes us inside the machinery of Washington to the extent that this one does.

What emerges, as Mr. Woodward and others note, is that Obama is not particularly good at the deal making process, and that this is a major hindrance to getting a deal of this magnitude pushed through.

One observer said that the White House was “not managed properly, was dysfunctional.” At one point, the four major Congressional leaders meet at the White House and actually ask the President to leave the room so that they can try to make a deal.

Meanwhile, each time a major deal gets close to approval from both sides, the warring factions of the Republican Party tear it apart. House Majority Leader Eric Cantor can’t agree with Paul Ryan who can’t agree with Boehner. No one knows who can get the votes needed for approval.

Yet, Mr. Woodward makes clear that the Republicans had a great deal of trouble establishing a relationship of trust with the administration. They complained regularly that there was no “outreach.” Dave Camp, Chairman of the House Ways and Means Committee said that “he was the tax man in a time dominated by debates over taxes, and he still felt like a stranger to the White House and the president.

The result was a lack of trust that made even the most bipartisan legislative efforts impossible at worst, and a chore at best.”

Bob Woodward concludes: “Americans are now left with a still struggling economy in the midst of a presidential election. It is a world of the status quo, only worse.”

In fact, that does seem to be the problem: our leaders can no longer exceed the status quo, the “New Normal,” the low expectations that an utter lack of altruism seems to have led them to.

The one thing that sticks out a mile from this book is that not a single character seems to have the slightest consideration for anything beyond what his or her peers demand. Previous leaders could combine practical politics with vision; like Disraeli they could “climb to the top of the greasy pole” but still look to the stars.

The characters in this book have their vision riveted on the main chance. You may have always believed that about the people in Washington. Bob Woodward has simply documented it for us.