The Price of Greatness: Alexander Hamilton, James Madison, and the Creation of American Oligarchy 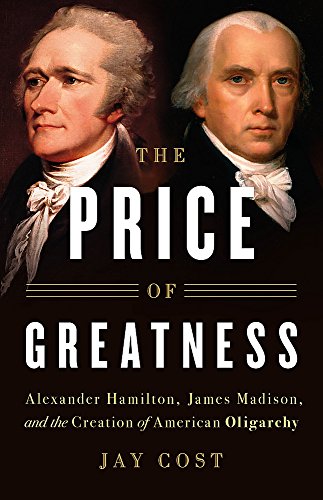 “a fascinating look at the interaction of money and politics in the early years of our republic . . .”

Skyrocketing government debt, political corruption, foreign influence in American politics, and the political struggle between wealthy and average Americans over control of governmental power are not matters ripped from the headlines. As this remarkable and insightful book recounts, these issues have been around since the founding of our country.

Students of Revolutionary and Early American History have long studied the divide between Alexander Hamilton’s Federalist and Thomas Jefferson’s Republican philosophies of government, finance, and foreign policy. However, the divide between Hamilton and James Madison, following their remarkable alliance that produced the Federalist Papers supporting the ratification of our Constitution, is equally fascinating and perhaps more important politically.

After the Revolutionary War ended, the newly independent United States were basically broke, militarily weak, and on the brink of a rupture between the new states over issues of trade, debt, and taxation. The weak Articles of Confederation did not provide any means of relief so a new Constitution was created, which laid out federal powers of taxation, regulated commerce, and attempted to balance national and local power.

However, as the author demonstrates, the devil of any plan for governance is always in the details, and no detail was more vexing to the new Administration of George Washington than settling both the national and state war debts, establishing a stable national banking system, and ensuring a secure currency to get the economy moving after eight years of war and an additional eight years of lurching from crisis to crisis due to an ineffective government.

Hamilton was a proponent of using the power of the new Federal government to implement a series of what today would be called public works projects, protective tariffs, a National Bank, and an industrial policy designed to create a diversified economy. Madison, like his fellow traveler Jefferson, stubbornly clung to an idealistic vision of an agrarian American economy built on the yeoman farmer, with minimal government involvement or support for industry or finance.

These political differences led to the first disagreement between the two men over the role of government versus private finance, in particular the involvement of wealthy financiers in settling the war debts and kick starting the economy.

Hamilton assumed that with the perilous state of the new country’s finances, only those with hard currency would be able to buy the war debt, which meant they would demand some guarantee of profit. Madison considered this little better than graft and had bitter disagreements with Hamilton and his fellow members of Congress over the terms of the eventual deal that settled the war debt.

While many of these financiers did commit what today would be considered insider trading, making a large profit in purchasing Revolutionary War bonds, there were few good alternatives that would have satisfied all the stakeholders, so Hamilton simply made the best choice from many impalpable alternatives.

Compounding this feud between the two men was the area of foreign policy, with Hamilton pushing for reconciliation between the United States and Britain based on their common heritage and economic interests, while Madison sided with Jefferson in championing the French Revolution. As President Washington tried to steer a hazardous course of neutrality between the warring European powers, Madison and Jefferson bitterly opposed the Jay Treaty championed by Hamilton that settled many of the disputes between Britain and American remaining after the Revolution.

Both sides sought to influence public opinion with a duel of essays in allied newspapers, which might shock modern Americans accustomed to the forlorn notion of an unbiased press, but in this era, newspapers were critical tools of political parties, and openly advocated partisan points of view. Both Madison and Hamilton wrote lengthy anonymous essays attacking the other’s positions, sometimes devolving into thinly disguised ad hominem attacks.

In the end, the author notes that neither of the two philosophies provided the complete answer to balancing the competing interests of nationalism, liberalism, and republicanism. While the naïveté of the Jeffersonians and their utopian nation built on yeoman farmers clearly ended with the military and economic realities of the War of 1812, so did Hamilton’s notions of concentrating political and economic wealth in the hands of a few wise and wealthy financiers and politicians.

The eventual compromise produced the so-called “era of good feelings” after 1817, which ended during the more turbulent times of the Jacksonian Era, the end of both the reign of the Revolutionary generation in the White House and the conclusion of the book.

Although Mr. Cost does occasionally rummage into arcane matters of finance, especially when discussing the issues of settling the Revolutionary War debt and the founding and operation of the first National Banks, overall this book provides a fascinating look at the interaction of money and politics in the early years of our Republic, showing that, like much of human nature, issues of greed and corruption are not sudden creations of the modern era.