Pretty as a Picture: A Novel 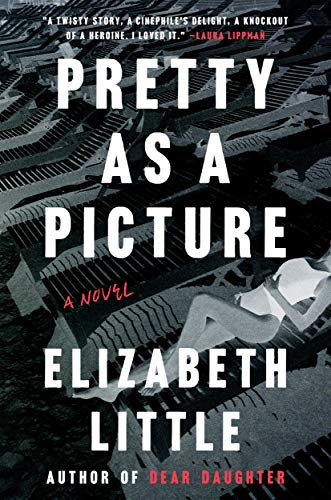 “Pretty as a Picture is a fun, slightly eerie, definitely scary look at real murder in a make-believe world.”

Film editor Marissa Dahl is a compulsive-suppressive with a habit of getting herself into embarrassing situations. At the moment, she’s out of work, but when the offer of a job on a new Tony Rees picture comes along, she’s hesitant to take it.

Seems she once dumped Tony into a fountain during a film festival. Accidentally, of course.

In spite of this faux pas, Marissa’s agent encourages her to take the job, so soon, she on the way to a small island off the coast of Delaware, and she hasn’t even seen the script.

“What are you shooting,’ Amy asks.

“A sixteen-page nondisclosure,” I tell her.”

Upon her arrival, Marissa immediately wishes she hadn’t been so hasty. She learns the film is based on an actual crime, and most of the people involved in the real story still live on the island, even the man many people believe killed a girl named Caitlyn Kelly, a man still ostracized by the community.

That the way the screenplay tells it, that Billy Lyle is the murderer.

There’s a lot of tension on the set, and it’s not all from Billy’s presence.

“Someone killed Caitlyn Kelly. That someone was never caught. So there’s a very real chance they’re watching now as a bunch of Hollywood doofuses recreate what was either their greatest triumph of their worst mistake.”

No one will tell Marissa why the former film editor was fired. Even the editor won’t talk about it when she phones him. A rollercoaster used in a pivotal scene jumps the tracks, and there are injuries. Then someone remembers the rollercoaster wasn’t in use the day of the murder so that scene has to be scrapped.

“My first day on set and they have a major lighting malfunction. Now I’m finding out a roller coaster jumped the track? That’s two accidents more than there have been on any other production I’ve worked on and it’s weird that everyone is A-OK with that.

I shake my head, confused. “So why did so many people get fired?”

Someone steals a copy of the film, but that’s not too bad. After all, it’s

been backed up, so why steal only one copy?

Then the worse happens. Liz May, the leading lady is killed, her body posed in the way Caitlyn Kelly was found.

With the aid of two precocious teenagers, Marissa will not only discover what really happened to Caitlyn, but that the deleted rollercoaster scene holds the clue to who killed Liza.

“I’m doing it again. Convincing myself that I’m important—that I might have a key role in what’s to come. I’m Sarah Connor, Luke Skywalker, Kung-Fu Panda. I may appear to be an inconsequential klutz but just you wait: There’s a training montage in my future. How easy to think I might be the hero when I don’t even have a speaking part.”

Marissa will have more than a “speaking part” if she can stay alive long enough to tell anyone what she’s learned.

Told in the framework of a podcast after the event, Pretty as a Picture is in some ways reminiscent of those mysteries of the late thirties and early forties—filled with heroines (girl reporter, wife of famous detective,  girlfriend of detective, sister of woman wrongly accused of the crime) who were fast-talking, smart as a whip, and always managed to put themselves in danger to get the story, learn the killer’s identity, or discover the name of the spy.

Even the setting—people more or less cut off from civilization by being on an island, a mountain resort, in a snowbound cabin, and unable to leave—is a contrivance borrowed from many suspense films, such as The Old Dark House, Agatha Christie’s And Then There Were None, and The Mouse Trap.

Marissa is smart, if somewhat bogged down by her fears, insecurities, and the many little actions she performs to keep her life together and as routine as possible. She’s quick with a quip, as the many wisecracks dotting the story prove. There’s no doubt she’ll save the day, but will she manage to save herself?

Though this is definitely a murder mystery, it abounds with flatly delivered one-liners, bon mots, and recognizable lines from movies designed to give it a humorous edge. If it wasn’t for the murder plotline, this would be a most humorous novel, but it is about a murder, and that tinge of unease, of danger hovering over Marissa’s shoulder, makes for some tingly literary moments.

Pretty as a Picture is a fun, slightly eerie, definitely scary look at real murder in a make-believe world.