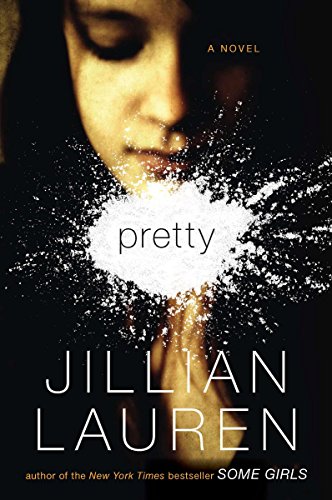 “Pretty is ex-pretty girl Bebe Baker’s story. . . . Bebe’s in-your-face voice is one of the novel’s strengths. . . . At times Bebe is maddening, but in Ms. Lauren’s skilled hands, she never stops being heart-wrenchingly sympathetic.”

Jillian Lauren makes it clear in the opening paragraph that Pretty is ex-pretty girl Bebe Baker’s story. A few sentences later, “Not that I’m some kind of genius but I’m not dull enough to think I lost even when the other guy sunk the eight ball,” you know Bebe’s in-your-face voice is one of the novel’s strengths.

Bebe isn’t just ex-pretty, she is ex-everything: ex-stripper, ex-born again Christian, ex-drug addict. Her road to self-destruction takes a detour when she and Aaron are in a horrific car crash after a night of excessive alcohol and drug use.

Aaron dies, and Bebe is left with a web of scars on her hands and legs from crawling through shattered glass at the scene. Theoretically, it’s those scars that make her ex- pretty, but it’s the deeper scars that leave her questioning and doubting her life’s value.

A year and a half after the accident, her choice to live in a halfway house is part self-imposed penance and part shelter from the real world. She struggles to stay clean and sober while attending beauty school with a cast of vulnerable and peculiar characters that comprise her makeshift family. Ms. Lauren’s talent for choosing just the right character detail gives each of them their own eccentricity and story.

In the hands of a less talented author, the recognizable plot of an addict hitting bottom and clawing out of the hole could have been a cliché, the female fiction version of A Million Little Pieces. Ms. Lauren’s portrayal rings true without being sentimental or preachy even when Bebe attends 12 step meetings or talks about her multiple diagnoses—PTSD, ADD, CD, MDD—or overeats until “my stomach churns so badly that I can’t stuff anything more down my throat do I stop and sit there, staring blank eyed at the wall, holding Chandra’s decimated Kettle Chips.”

“When you’re from somewhere else, you think there’s a promise to California. I don’t know if it’s some cellular thing—like your ancestors in the wagon train only made it as far as Ohio and you’re completing the journey—or if it’s the Beach Boys or the Beat poets or ‘Baywatch.’ You get in that car pointing west and you think the answer is at the end of the road. You really do. But here I am in the continent’s edge, jagged and final, and there’s no West left to go to and I still don’t have what I want.”

When the novel opens, Bebe has completed 528 hours of beauty school and has 72 to go. The beauty school hour’s countdown marks time and more importantly creates a sense of urgency about what’s at stake as Bebe makes some infuriating choices in the days before graduation. At times Bebe is maddening, but in Ms. Lauren’s skilled hands, she never stops being heart-wrenchingly sympathetic.