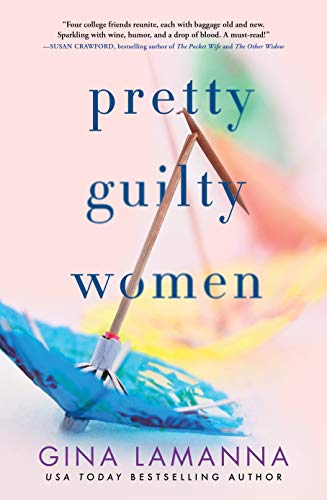 “One murder, four confessors . . . what more does a good mystery need?”

In Gina Lamanna’s new book Pretty Guilty Women, she has set the stage for a story that is hard to walk away from. One murder, four confessors . . . what more does a good mystery need?

Three women approaching middle age are invited to attend the wedding of a college friend, a lavish affair with a week’s worth of pampering for everyone.

But the friends, Kate, Emily, and Ginger, have lost touch with each other over the past 20 years; each has set the groundwork for her own life and this get together will open some old wounds.

Enter Lulu, extravagantly wealthy; approaching her seventh decade with her third husband in tow, her only relationship to the wedding is the fact that her husband is a relative of the bridegroom.

Kate: a lawyer, partner in her New York law firm is listening to her biological clock tick away. Always the leader,the one who directed the traffic, she is now desperate to have her own child with her, sort of, live-in, Max. All attempts at conceiving a child fail. And in spite of always getting her way, this is the one project that fails her.

Ginger: mother of three, married to her college sweetheart, she is the family member who holds it all together. Her teenage daughter, Elsie, is typical and a problem, and Ginger is not beyond embarrassing Elsie for teenage mistakes. Ginger loves her family, and they love her, but coping with an angst-ridden daughter, two rambunctious youngsters, and a husband, Frank, who is the go-between, raises stress to an uncontrollable level.

Emily: drinks too much, lost a baby to SIDS—a fact that no one else knows and she does not share—ended an abusive relationship badly. Add to the mix that during college Emily and Frank enjoyed one moment of kissing and were discovered by Ginger. Ginger has never forgiven Emily, and now the two women will face one another for the first time in decades.

Lulu: sees clues that lead her to believe her husband, Pierce, is having an affair. Of her three husbands (four marriages, one to the same man twice), this is her one true love, and coping with such a loss is monumental in her mind.

Enter Sydney Banks, a young, pathetically thin young woman with her baby in tow. Sydney is another relative of the bridegroom, and she looks as out of place as a canoe in a hurricane.

As the four women gather at the Serenity Spa & Resort, lives start to fall apart. Kate’s lover, Max, breaks up with her; Emily met a man on her flight, who is attending the same wedding and they strike up a one-night-stand relationship that goes south quickly; Ginger must herd her husband, teenage daughter, and two younger children who prefer not to behave, through the maze of wedding rehearsals, dinner rehearsals, and an unwanted murder!

Lulu in the meantime is worrying herself over the possibility of losing the one husband she ever really loved. And yet she remains resilient: “Lulu’s eyes twinkled. ‘Friends are wonderful, aren’t they? Men come and go, but women, you can count on the good ones.’”

Sprinkled throughout the story, almost with every chapter, is a short scene in the present where Detective Ramone is interviewing the four women as well as resort staff about the death of a man. It seems that all four women have confessed to being the murderer—the one and only murderer, a definite conundrum for Detective Ramone.

Through this story, Lamanna skillfully weaves in background information about each woman, and yet that information is not intrusive to the story. Lamanna never deviates from the story arc.

Tension builds with each character coming to terms with her own problems, and each character learning that life around her, as she observes it, is not at all what it seems.

Lamanna does a superb job of keeping the story tight, the mystery undetectable until the end. As one attempts to determine first who was murdered, and then who committed the crime, and finally why the crime was committed, clues are picked up and then discarded, leaving the reader wondering to the end.

At the very end of the story, Lamanna ties up one loose end that could probably have been left untied, but it is a satisfactory ending. Pretty Guilty Women is a joy to read!

Lamanna’s writing style is so engaging as she first introduces each woman and those surrounding her, and then continues to move each toward an inevitable end, that it is indeed difficult to put the book down.