The Presidency of Donald J. Trump: A First Historical Assessment 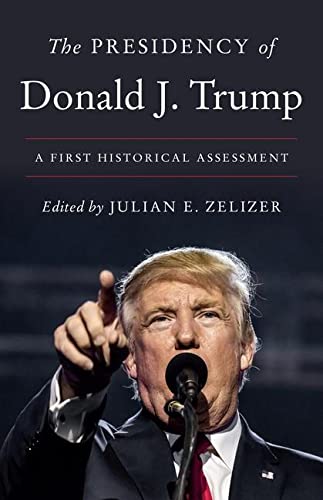 Since Donald J. Trump is still a very active politician, it is good to have an initial review of his presidency by a team of experts on 19 different facets of his presidency. Every facet, their assessments demonstrate, was a disaster for the United States.

Begin with the chapter by Princeton historian Julian Zelizer, on Trump’s interactions with the Republican Party. Trump exploited the racism and ideological extremism nourished by the GOP since the times of Barry Goldwater and Richard Nixon and turned a fluctuating tactic into a permanently operating feature of GOP strategy. In this and other regards, Trump sickened America’s body politic. Kathleen Belew, University of Chicago, takes the reader deeper into “militant” whiteness in the age of Trump. Keeanga-Yamahtta Taylor, also at Princeton, discusses the politics that led to Black Lives Matter and the aftermath.

Nicole Hemmer, a researcher at Columbia University, and Angus Burgin, historian at Johns Hopkins University, show how Trump and his aides transformed right-wing media and made many people wonder if truth exists and, if so, it matters.

Several chapters deal with the politics of people who are not WASP males. Geraldo Cadava, Northwestern University, examines Latinos for Trump; Leandra Zarnow, University of Houston, addresses Trump’s feud with feminists and the triumph of conservative women; Mae Ngai, Columbia University, reviews how Trump manipulated immigration issues to please his base.

Other professors assess Trump and the world. Bathsheba Demuth, Brown University, shows how far Trump was out of step with science and the public consensus on climate change, Jeffrey A. Engel at Southern Methodist takes us from the internationalism of George H. W. Bush to Trump’s myopic America First.

Columbia University health scientist Merlin Chowkwanyun assesses Trump, culpability, and Covid 19. He buttresses a New England Journal of Medicine editorial in October 2020 contending that Trump ignored scientific expertise and instead embraced “charlatans, who obscure truth and facilitate the promulgation of outright lies’ These arguably criminal actions squandered lives and money, wasting an opportunity to prevent excess death. Trump repeatedly ignored or attacked the Centers for Disease Control and Prevention. In July 2020 Trump’s adviser on trade with China, Peter Navarro, denounced Anthony Fauci in USA Today for refusing to endorse hydroxychloroquine use because of insufficient data. By fall 2020 Trump had marginalized Fauci and Deborah Birx, the two infectious disease experts on his task force.

What about impeachment after Trump? The case of this president twice impeached and twice acquitted, according to Gregory Downs, University of California Davis, shows, as Alexanser Hamilton foresaw, that impeachment is a political not a legal process. We live in a time when party loyalty outweighs congressional oversight or public shame. So long as they retain support from their base, presidents can act with impunity. Future presidents can now assume that, whatever they do, the Senate will never achieve sufficient votes to impeach. Should Americans continue to venerate their Constitution as a bulwark of responsible government?

Why—trying to resist Trump—have Democrats moved to the left? Georgetown historian Michael Kazin starts with the reality that the United States has lacked a dominant political party since New Deal Democrats lost to Ronald Reagan in 1980. The current partisan standoff has lasted four decades and shows no sign of ending. Democrats eked out tiny majorities in Congress in 2020. To achieve his goals, President Biden needs a coalition as broad and energized as that which FDR used to govern during the Great Recession and World War II. Will he win such support? Apart from Signing the Affordable Care Act, most of Bidens bold initiatives have gone nowhere—thanks in part to the defections of two Democratic senators,

Besides the chapters summarized here, other parts of the book address Trump’s rhetoric and inaction on infrastructure, his interactions with high tech, the chaos that characterized his dealings with China, his alignment with Israel and Middle East autocrats, and his war against the FBI and the intelligence community

The book reveals a greedy, myopic TV star, broadly incompetent except in demagoguery, who became one of the worst presidents in US history. Since he and much of his base despise knowledge, his book is unlikely to change minds or votes.

For a different, somewhat spiritual perspective on all this, see Brian M. Rees, How Reasonable Americans Could Support Trump: Helping Liberals Understand the MAGAverse, and Whatever Comes Next (San Luis Obispo, CA: Manu, 2021).