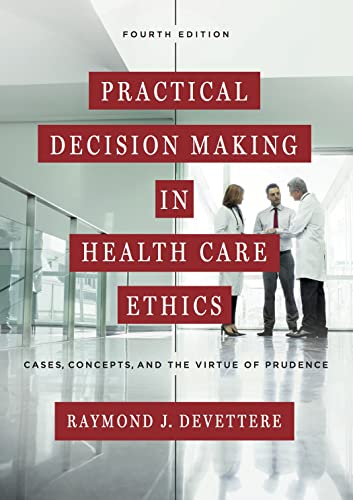 Anyone who would choose to read Practical Decision Making in Health Care Ethics is either a serious student or a health care professional. This tome is not quite as long as Gulag Archipelago, but enough to remind one of that long winter. The book is thankfully well organized and uses contemporary case studies to illuminate the conundrums we face as health care patients, advocates, clinicians, administrators, and law makers.

Devettere’s treatise flays open the modern world of health care, where high tech science clashes with historical precedent, religious views, and current laws. It seems we are all rushing to catch up with this “brave new world” of possibilities to begin and end life.

Proving that truth really is stranger than fiction, the book is bursting with interesting cases, such as a woman being kept artificially alive to deliver a child, even though the fetus was only 14 weeks old at the time of her brain death.  Which begs the question, if your brain is dead, are you dead? Apparently there is disagreement. Do I hear Hollywood calling for this biopic? Turns out the idea to have a posthumous child is de rigueur these days. Where would women be without the interference of “the state” in deciding what happens in the womb or its adjoining properties?

The perennial favorite includes former Republican Presidential candidate, Jeb Bush, who, while Governor of Florida, signed legislation overturning a judicial ruling affording the husband of Terri Schiavo, after eight years in a vegetative state, to have her feeding tube removed and allow her to die naturally. Never mind that another judge found Governor Bush’s action was unconstitutional; it turns out the executive branch doesn’t run roughshod over the judicial branch after all.

The book isn’t all pragmatic and in fact, the first three chapters explaining ethics from Aquinas to Cicero are not helpful for health care decision making today, but if you are an armchair philosopher, university professor, or attorney, it may be of interest.

Chapters that are must reads: Deciding for Others, Determining Life and Death, Life-Sustaining Treatments, Reproductive Issues, Euthanasia and Physician-Assisted Suicide, Transplantation, and Medical Genetics and Genomics. These chapters offer practical insights into ethical quagmires and approaches to solve them in the health care continuum. If you work in a facility with a Neonatal unit, it would behoove you to read Chapter 12, Infants and Children.

The most helpful aspects of the book are the specific recommendations for how to consider some of the health care ethical quandaries. Each chapter includes reflections at the conclusion, which aren’t really crib notes, but do provide a summary of the chapter’s teachings.

There are new acronyms to learn and some very useful observations peppered throughout the book. Chapter Five, Making Health Care Decisions, is especially useful in its examination of the various medical directives, proxies, and POLST orders which are used to convey medical decision making when a patient is incapacitated.

Devettere goes beyond other medical ethics books when he illustrates the difference between states for everything from recognition of death, including cardiac and brain death, to when a DNR order applies. If that isn’t challenging enough, the book reveals case after case of nurses who interfered with patient medical directives and refused to comply with medical orders.

For the prepared patient, bring your own health care advocate, because as this book reveals, the existence of your medical orders does not necessarily mean they will be respected.