The Power of Neurodiversity: Unleashing the Advantages of Your Differently Wired Brain 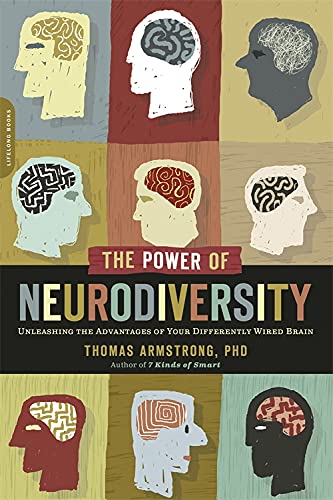 “Parents of children who have been diagnosed as belonging to one of these groups and adults who have been living with any of these labels will find positive affirmation and encouraging advice on how to see their brain’s wiring as an asset rather than a liability.”

Criticizing what he sees as an increasing “culture of disabilities,” Dr. Thomas Armstrong’s latest book, The Power of Neurodiversity, debunks the prevailing view that people with dyslexia, autism, and attention deficit disorder are “defective.”

“We’ve become one-sided in our disease-based orientation to brain differences and need to spend time exploring the positive side to correct this imbalance,” the author writes. Ironically, Dr. Armstrong attributes the imbalance to the effective work of advocacy groups for specific “disorders.”

Dr. Armstrong wants to correct this imbalance in viewing people who have “differently wired” brains as problematic. Instead, he supplies ample evidence that many “neurodiverse” people are actually better at many tasks than so called “normal” people.

In fact, Dr. Armstrong speculates, “normal” may become an obsolete notion as we come to better understand the uniqueness of each person’s brain and how he or she functions. His book is a major advance in reaching that understanding.

In defense of his view that neurodiversity should be seen as an asset rather than a defect, Dr. Armstrong lists eight principles of neurodiversity. In summary, he cites evidence that the human brain works more like an ecosystem than a machine, that competence exists along a spectrum and whether or not a person is viewed as disabled or gifted depends on cultural contexts, i.e., when or where the person was born.

The human brain is so highly adaptable and humans are capable of making environmental adaptations to accommodate their way of thinking. So many persons who are neurodiverse can not only be productive individuals but actually excel at tasks suited to their brain function—given a supportive work environment or what he calls “niche construction,” which he feels may be as important to evolution as natural selection.

In fact, Dr. Armstrong postulates that most of the neurodiverse conditions survived evolution because they helped the species survive. People with ADD, for example, were cognitively able to notice many details crucial to survival which might have been overlooked by less observant individuals.

Specific chapters deal with autism, Asperger’s syndrome, dyslexia, mood disorders, Downs syndrome, and the “rainbow of intelligences,” and schizophrenia. Parents of children who have been diagnosed as belonging to one of these groups and adults who have been living with any of these labels will find positive affirmation and encouraging advice on how to see their brain’s wiring as an asset rather than a liability.