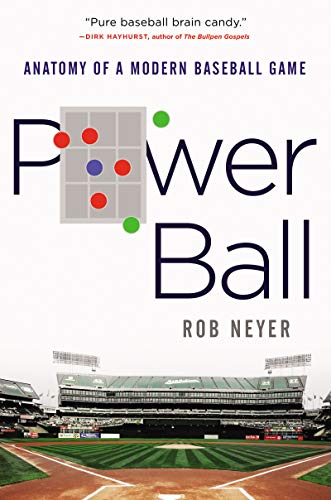 If Marcel Proust had been a 21st century baseball analytics expert, and chose as his subject a single game, his book might’ve ended up like Rob Neyer’s Power Ball: Anatomy of a Modern Baseball Game. The book follows the course of the contest between the Oakland A’s and Houston Astros on September 8, 2017; meanwhile the narrative swerves and loops all over the landscape of current-day baseball.

Neyer has been at the vanguard of the Sabermetrics revolution (Society of American Baseball Research + metrics), which is the movement of statisticians that have transformed how baseball is analyzed, and hence, played. Neyer was the assistant to, and co-authored one book with, and one about, Bill James, the genius statistician and current Boston Red Sox advisor.

So we have an expert Sabermetrician at a game on September 8, 2017, reading his thoughts on such items as a baseball’s spin rate, J. D. Martinez’s slash line (batting average/on-base percentage/slugging percentage), super-utility players, Win Expectancy, the finer points of using the disabled list to rest pitchers, from which countries the players hail, and the frequency of intentional walks.

However, through all of this, the baseball fan’s experience—what the revolution of stats, cameras, and analysts has wrought—is a side issue. Right now, many teams employ more people to analyze the data generated by baseball players than the 25 they pay to play at the Major League level. Cameras that can measure the distance between every blade of grass on the field, or how fast a fielder moves towards a batted ball, or the 100+ MPH the batter swings his bat, or the angle of his uppercut, or the speed of the ball leaving the bat, or anything else one can imagine, now ring Major League playing fields, dead machine eyes capturing terabytes of data from each game, which are available to all the teams’ numbers-crunchers (just wait for those sensors to be turned around and start measuring every metric of your job production).

The stats guys have advised batters to try to hit the ball over the fielders—hence an explosion of home runs. This is great while watching the flight of the ball for eight seconds, or so, and cheering (or booing) while the batter trots the bases. And then everyone sits down, with no runners on base, waiting.

And what has filled up the waiting time at Major League baseball games? The phone. Since the rollout of the iPhone in 2007, no major sport had been afflicted nearly as much by fans looking at their phones rather than the field of play as baseball, eroding the shared experience that is a huge part of the appeal of attending a sporting event.

With more pitching changes than ever, the advent of “instant” replay—where all play is stopped and the fielders look like they’re commuters milling about on a train platform—we fans are literally watching them wait—the lulls are longer and more frequent. And with replay, the spicy relish of players and managers heatedly arguing with umpires has been almost completely expunged. This year, amidst a strong economy, Major League baseball attendance dropped 4%. The Miami Marlins averaged about 10,000 people per game in a stadium that can hold 37,000.

Meanwhile through Power Ball, the A’s-Astros game continues with things that inspire Neyer’s digressions on all-things Sabermetric, and some not to do with numbers-crunching, such as the more-than 50% decline, since the peak, in the number of African Americans playing professional baseball. The A’s begin the bottom of the 9th inning down 8–7, then smack a homer, and a double. Jed Lowrie hits a single to drive in the winning run, sparking a joyous rush of all his teammates onto the field.

When teams are good, fans remain enthusiastic, and attendance rose this year for Colorado and a few teams that had successful seasons. But when every analytics staff is coming to pretty much the same conclusion, the game homogenizes; and right now it has homogenized to a point where players are standing still a lot more than in previous eras.

Whether or not the fan experience is to be addressed is up to those who control Major League baseball. But baseball has, traditionally, been much less willing to radically change its rules than other sports. Today, going to a professional football, basketball, hockey, or soccer game is usually much more cohesive, and yes, exciting, than a baseball game. Power Ball is a top-notch guide through what is, arguably, to any fan who isn’t a statistician, the least enjoyable era in the history of baseball.