Portrait of Peril: A Victorian Mystery 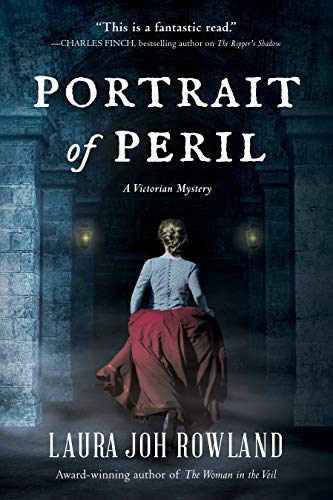 Portrait of Peril opens with the wedding of Sarah Bain, reporter and photographer, and Thomas Barrett, police detective. It’s a conventional wedding ceremony until it is disrupted first by an angry enemy of both the bride and the groom, and then the discovery of a dead body in the church crypt.

Considering Sarah’s independent strain, it is only likely that she will follow her new husband into the crypt, leaving behind the wedding guests. To her horror, she discovers that the murdered man is one she once knew, Charles Firth, a man she bought her first camera from, a man who kindly discounted the rate in order to let her start her new career.

It should be noted, however, that the investigation reflects almost no activity on Barrett’s part, which is odd considering he is the official detective, yet he seldom discusses what progress he is making with his investigation, while Sarah seems to have the greatest successes in resolving the murder.

Rowland sets her story in Victorian England just after the Jack the Ripper affair, so the concept of an independent career woman is inviting. Written in the first person, the book allows the reader to easily ride inside Sarah, sensing her emotions as they surface. The other characters are revealed only through Sarah’s eyes and thoughts, but Rowland effectively creates the antagonists to play against Sarah.

The story has its weak moments, primarily because there are several stories moving through at one time, and the segues from one to another are not always smooth.

As Sarah begins to search for possible murder suspects, she is also battling her internal devils regarding her father, who was accused of raping and killing a young girl several decades before. He escaped the law, abandoned the family when Sarah was a child, created another family with now a step-sister to Sarah, and has reappeared in their lives, claiming his innocence. Both women believe he is not guilty, and this second story revolves around their search for the facts that will prove his innocence. This second story has a lot of potential as a completely separate book, although Rowland chose to continue it through to the end of this one.

As the story progresses, we are introduced to Sarah’s mother-in-law Mathilda Barrett who’s disapproval of Sarah is complex, but out there for everyone to see. She takes every opportunity to let Sarah know of her dissatisfaction. This would be a small side story if not for the fact that Barrett, Sarah’s new husband, is portrayed as wishy-washy when it comes to dealing with his mother. Perhaps a gene inherited from his father, who also avoids confrontation with the volatile Mathilda, leaving Sarah to be the only one to defend herself.

A further issue to distract the reader is the disappearance of Hugh—one of Sarah’s fellow investigators and a good friend. This distraction raises its head several times throughout the story, and Rowland gives no real indication of where this issue is going until the very end of the story.

The primary story—the murder of Charles Firth—has several good twists and turns as the story unfolds. Firth presented himself in life as a professional ghost photographer who sold his skill to those who had lost a loved one. Through his photography skills, he was able to provide the bereaved with a photograph with the ghostly appearance of the loved one. Fact or fiction?

As Rowland unfurls this part of the story, she takes the reader through some of the underbelly of Victorian England as the search for the murderer progresses. A group of women fight against what they term the falsehoods of Firth’s work, versus those who will go to their own graves defending his ability to photograph ghosts of the dearly departed. Both groups present good suspects for Firth’s murder.

There are a few minor issues that cause one to take pause . . . at the beginning when Sarah rushes to the crypt, and later that day as she follows clues, she never changes out of her wedding dress, and even comments about it after several chapters when she arrives back at the flat she shares with her photography partners. And Barrett seems to disappear on and off while Sarah is investigating—not a good start to married life.

There are also moments, particularly when Sarah is dealing with her father’s story and her memories of growing up with a recalcitrant mother, where Sarah’s emotions seem too overwrought.

In spite of the multiple stories wandering through the book, Rowland tells a good murder mystery and keeps the pages turning.