Portrait of a Man Known as Il Condottiere 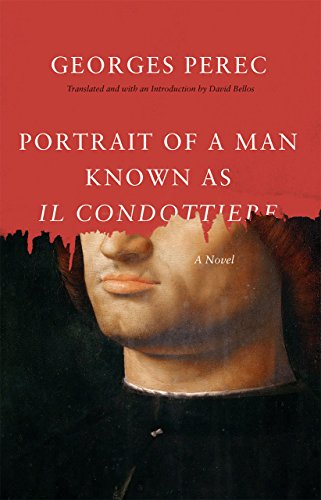 “a fully realized and mature work of fiction . . .”

In the middle decades of the previous century writers on both sides of the Atlantic were preoccupied with authenticity and its opposite. In his 1951 novel The Catcher in the Rye J. D. Salinger’s adolescent protagonist Holden Caulfield considers adults phonies, and William Gaddis’ 1955 tome The Recognitions is about an art forger. It is perhaps fitting that French novelist Georges Perec’s previously unpublished first novel, which is also about an art forger, was posthumously reconstructed from two carbon copies of a lost original.

In his informative introduction to Portrait of a Man Known as Il Condottiere translator David Bellos describes how the book was written between 1958 and 1960, rejected by one publisher, accepted with a cash advance by another publishing house that requested a rewrite which it then declined to publish while allowing Perec to keep the advance, and how the manuscript was lost six years later when the author moved to a larger apartment.

Bellos also places the book both in its cultural context with particular reference to the issue of authenticity and inauthenticity in Jean Paul Sartre’s Anti-Semite and Jew (1946), a work Perec (whose surname is a Gallic version of Peretz; Perec was a distant relation of the Yiddish writer I. L. Peretz) would have been aware of, and in the context of Perec’s later oeuvre.

In some ways Portrait of a Man anticipates Perec’s later work. Its protagonist, Gaspard Winckler, for example, reappears as a character in Perec’s 1978 novel Life a User’s Manual. But it is less experimental than his later novels that withhold or omit elements the reader must guess or infer, as in A Void (1969) in which periods replace the letter “e”: “Ch.rs brigadi.rs, J. vous rapp.ll. qu. notr. prochain. r.union aura li.u ch.z G.org.s P.R.C—92 ru. du Bac—Paris”.

Though less experimental, Portrait of a Man’s narration is hardly conventional. In the first of its two parts the narration forces the reader to pay attention by alternating between the first, second, and third person as art forger Winckler, who has just murdered his boss Madera, tunnels his way to freedom. The second part repeats the narrative in the form of a dialogue between Winckler—who has taken shelter after his escape with his friend Streten—and Streten, whose inquisitive tone alternates between those of a police interrogator, psychotherapist, and pastoral confessor as Winckler tries to justify the murder.

The first part’s shifts in person slow down and diminish the intensity of Winckler’s breathless, feverish, adrenaline fueled stream of consciousness discourse addressed alternately to the reader and to himself and interrupted by an omniscient narrator, while increased use of ellipses plays a similar role in the second part where the prose is more jagged yet the dialogue achieves greater narrative coherence.

Like Perec, whose soldier father was killed in action in 1940 and whose mother was murdered in Auschwitz in 1943 after which he was adopted by his uncle and aunt, Winckler spent World War II in a Swiss boarding school. Unlike Perec, Winckler’s parents survived the war but he and they cannot restore an emotional bond, and he stays in Switzerland where he has already been recruited by and begun his apprenticeship under Madera’s older art forger Jérôme.

While Jérôme teaches Winckler art forging techniques, Madera pays for formal education in art restoration at NYU’s program at the Metropolitan Museum of Art in New York and subsequently at the Louvre in Paris. Thereafter Winckler produces his own forgeries for which he is paid 25% of the sale price while holding nearly no-show cover jobs first as an art restorer at a Swiss art museum and subsequently at an art gallery in Geneva run by Madera’s underling, Rufus.

Winckler enjoys a quite comfortable standard of living doing work he enjoys with an apartment near his dummy job in Geneva and another near his studio outside Paris, ski vacations in Switzerland and summer vacations on Yugoslavia’s Adriatic coast, though he is unable to sustain romantic relationships perhaps because he is living a double life. As a reward for 12 years of productive service Madera asks Winckler to chose his next assignment, and he decides to paint a second Portrait of a Man known as Il Condittiere by renaissance portraitist Antonello de Messina that can pass not just as a copy but as a wholly original work of art.

“What was the illusion he had cherished? That he would be able to cap an untarnished career by carrying off what no forger before him had dared attempt: to create an authentic masterwork of the past, to recover in palpable and tangible form, after a dozen years’ intense labor, something far above the technical tricks and devices of his trade such as mere mastery of gesso duro or monochrome painting—to recover the explosive triumph, the perpetual reconquista, the overwhelming dynamism that was the Renaissance.”

Of course it is impossible for a painting to be both a convincing forgery and an original masterpiece; Winckler’s portrait is neither, and his attempt ends in failure. And though Winckler set himself up for failure he blames Madera for whom he insists he labored as a well-compensated slave.

Perec doesn’t spell out the whether Winckler's bond to Madera was in fact a life sentence he was not free to sever, or if he was free to resign and pursue another career providing he keep his previous occupation secret, yet the moral justification of the murder hinges on the answer to just that question.

In this sense Portrait of a Man is a moral murder mystery where the culprit is revealed at the outset, and the reader must determine whether the murder is morally justifiable. And though Perec lets readers decide for themselves whether Winckler’s justification is convincing or self-incriminating, the frequent appearance of the phrase “so what” throughout Winckler’s discourse suggests the latter.

Unlike Danilo Kiš’ immature but promising first novel Psalm 44 (also reviewed on NYJB), Portrait of a Man Known as Il Condottiere is a fully realized and mature work of fiction that will provide Perec’s fans a fuller view of his oeuvre, can serve as an accessible entry point for readers who are new to its author, and is recommended to readers of literary fiction who enjoy dense prose presented in multipage paragraphs.