Port of Shadows: A Chronicle of the Black Company 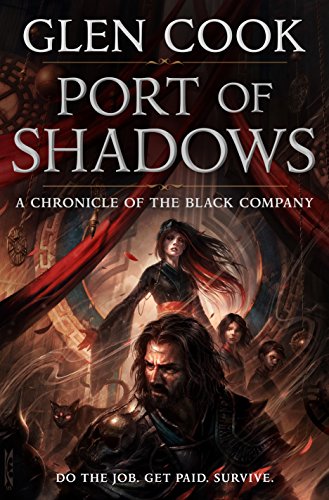 It’s been a while since Glen Cook took us into the world of what is arguably his most famous work, the world of the Black Company. No one does military fantasy quite like Cook, who manages the darkness with just enough wry humor to keep the nightmares from taking over.

Port of Shadows proves no exception to this rule. Set as a stand-alone story that takes place somewhere around the same time as the second book in the Black Company series, Shadows Linger, this story expands on that universe without detracting from the original trilogy.

Do the job. Get paid. Survive. That’s the tagline for this work, and it could easily apply to the original trilogy because it sets the mood quite well for a legendary mercenary group employed on the most dangerous missions set forth by a dictator with near infinite magical power.

Once again Croaker, the physician/warrior of the Company, provides the narration. With plenty of action and tongue-in-cheek dialogue, Croaker supplies gallows humor and humanity to the business of being a bad ass. As the Company Analyst, it’s his job to write the history of the Company, offering future Company members an insight into this unique military brotherhood.

In this rendition, there’s a plot to bring back the ancient evil of the Dominator, the mad wizard-Emperor of the Domination who killed a bazillion people during his ruthless rule before being put down by scrappy rebels led by a hero called The White Rose. Now, for those who have read the books (and it’s recommended before diving into this one), we know the Dominator is carefully sealed away in a barrow surrounded by ancient and fell magics, but that never seems to stop the stupid from trying to resurrect him.

This plot (by a group called, creatively enough, Resurrectionists) is centered around the mystic gateway (called the Port of Shadows, of course) that will bring the old evil back into the world.

While at first appearing as a straight-up military fantasy, it quickly develops into a strange, magical mystery with Croaker as sort of a hapless gumshoe doing his level best to put the pieces together in a way that makes sense. The only problem is this puzzle has no set pieces and nothing he can do will ever bring him the kind of understanding he feels comfortable with.

Port of Shadows is vintage Cook, with all the heavy-handed irony and acidic wit of the original series, an enjoyable read that keeps you coming back for more. The one thing that makes this different from the other Black Company novels is a new twist on the same old story: the added dimension of both fallibility and humanity to Croaker, bringing much-needed depth to the character that was missing before. The reader finds that, while still kind of a sarcastic jerk, Croaker possesses a kind of touching vulnerability previously unseen. This makes the character, and the book, much more relatable, not to mention enjoyable. It also displays him as being fairly fallible and prone to more mistakes than evidenced in the original series.

Port of Shadows satisfies with Glen Cook smartassery, action, and the twisty plots that he’s known for.