The Porpoise: A Novel 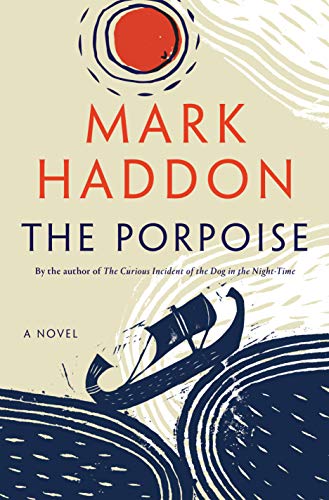 “The writing is brilliant, building from a deceptively plain beginning few paragraphs to sophisticated prose that leaps off the page.”

Weaving a horrifying modern tale of a father’s obsessive, increasingly perverted love for his daughter into a parallel retelling of the ancient legend of King Antiochus, Mark Haddon’s The Porpoise is unrelentingly grim, an uncomfortable read.

Losing his wife Maja in a horrific plane crash caused by an amateur pilot’s bravado, Philippe is catapulted into shock. It’s inconceivable he’s lost his vivacious and beautiful former actress wife, doubly mystifying that his money could, for the first time, neither cushion him from life’s random brutality nor offer solace. Grief-stricken, he leans over a building imagining how easy it would be to let go, the prospect of death “like falling into bed.”

In his sorrow forgetting his wife had been 37 weeks pregnant, the subsequent stark realization the child had been cut from her dead mother’s belly was unbearable. He did not want the baby, could not bear to think of her. Still, she was the link that bound him to his late wife.

Unprepared for the child’s striking beauty, when they meet he’s taken aback that she looks like him—dark-skinned and exotic—rather than her fair, blonde mother. Her eyes are riveting; despite himself he’s entranced.

Understandably overprotective, Philippe imprisons his daughter in a gilded cage of wealth and privilege, ostensibly to keep her safe. As she grows older, paternal caresses turn carnal. It’s a simple enough matter replacing employees, once they begin noticing the unnatural attention he’s giving his daughter, easy to shelter her from the world—and the world from coming to her aid.

The years pass. Angelica grows graceful and beautiful, losing her childlike appearance, becoming more womanly. Allowed no television, Internet, or contact outside their home, she has no frame of reference. What her father does to her must certainly be normal. She has no reason to think otherwise.

Turning 14, the age her father’s considers “respectful” for intercourse, things begin to shift. What he does to her starts to hurt. The eyes of the servants, the looks on their faces, begin to make sense. She starts to get it: Her father’s attentions are unnatural.

It isn’t until a handsome young man comes to visit, bringing artwork he knows Philippe covets as an excuse to gain entrance and have a look at the fabled beautiful daughter, that Angelica has the opportunity to appeal to an outsider with the power to help. Within moments, he sees through the charade.

He invites the girl on a drive and is intent on rescuing her, but Angelica’s desperation to get away catches her father’s attention. He grows agitated. Sensing the futility, the young man retreats for the moment. Later making another effort, Philippe catches him, raining down holy hell. In the ensuing violence, the young man is injured, nearly killed, chased away.

Angelica’s only hope gone, she slides into despair. Though it hardly seems possible, the story becomes ever darker. There will be no redemption.

Haddon bases his novel on the story of a king who offers the hand of his beautiful daughter to any man who can solve a riddle, the answer revealing King Antiochus is having an incestuous affair with his child. Enter Pericles, the valiant and very clever suitor. The answer to the riddle obvious to him, he senses admitting that will put his life in danger.

Antiochus has no intention of letting his daughter go. When Pericles asks for a few days to mull over the answer, the king sees through the ruse. He grants the young man 40 days in a show of fairness; as Pericles gallops toward home an assassin follows close on his heels.

Alternating between a contemporary storyline and the myth inspiring it, at first the swings back and forth feel smooth. Kept balanced, it’s easily navigated. However, as the book progresses and Haddon extends the Pericles sections longer and longer, the interruptions become intrusive, breaking the narrative spell. It’s as if The Porpoise is made up of two entirely different books forced together, in a rather ungainly way. Had it been better balanced throughout, perhaps the effect could have been more satisfying.

By turns riveting and repulsive, the sickening story of a father’s descent into an incestuous relationship with his daughter is the more compelling narrative: difficult to read, yet impossible to put down. The story of Pericles, just as skillfully written, cannot quite keep up. The ever-lengthening fable begins to feel interminable, such is the power of Angelica’s pull.

The writing is brilliant, building from a deceptively plain beginning few paragraphs to sophisticated prose that leaps off the page. The Porpoise remains unbalanced, yet the end of Angelica’s story is epic Greek tragedy. Haddon pulls the columns from the temple, buckling the walls, the crashing stones crushing the life from his characters. The reader stands in awe, squinting through and covered with the dust, as the curtain falls.

In its crushing power The Porpoise is ultimately redeemed.