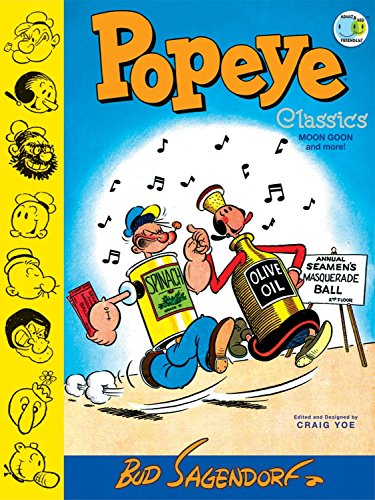 What an exciting way to rediscover one of the most imaginative and funny comics characters. Thrill to stories about pirates, moon landings, wild inventions, foiled kidnappings, the search for the ever elusive hamburger, and the exploits of one incredibly talented, strong, and stunningly mature baby named Swee’Pea.

Popeye Classics Volume 2 is a collection of the squinty-eyed sailor’s appearances in his self-titled comic book from late forties. The book includes everything form the text pieces to the backstories featuring Wimpy or Swee’Pea.

Written and drawn by Bud Sagendorf, the imagination and humor found in these wonderful adventures cross generations. To have them back in print for the first time in over 60 years is a treasure.

For decades Popeye was one of the most popular characters to ever come out of a newspaper comic strip. When he first appeared inside the newspaper strip Thimble Theatre on January 17, 1929, no one could have ever predicted that he would have been with us so long.

When the mumbling sailor with strangely shaped arms first appeared the strip had already been in papers across the country for ten years. The early days of the strip centered on Olive Oyl her family. This included her brother Castor Oyl, her father Cole Oyl, and her boyfriend Harold Hamgravy.

The only reason the sailor first appeared was to further the adventures of the strip’s central storyline. No one had any idea that he would catch on. In fact he was shot at the end of that storyline!

Readers loved the little guy who spoke in such a funny way. The strip’s creator E. C. Segar brought him back as soon as he could. In time Popeye not only took over the strip, but also grew into a merchandising blockbuster.

Between his popularity in newspapers and on the screen Popeye ruled multiple medias for years. Merchandising based on the character became one of the most profitable in the history of comic characters. In the early 1930s The Fleischer Studio did some of their finest animated work on cartoons with Popeye at the center.

When TV came along those wonderfully antic and imaginative animated feasts were on every station in every city during the sixties. For decades those cartoons filled Saturday and Sunday mornings. As a result generation upon generation grew up with Popeye as part of their life.

But as popular as he is, most critics and fans take his presence in comic books for granted. This makes this series of reprints all the more necessary, for the work that Mr. Sagendorf creates is incredibly rich.

Originally published in the late forties by Dell Publishing, this volume reprints stories from the Popeye comic book. The adventure at the heart of all these stories skips along with an inventiveness that moves from science to the mythic in the space of a few panels.

Originally Mr. Sagendorf was an assistant on the newspaper strip. After the passing of Mr. Segar, (the strip’s creator) he assumed more duties for the syndicate. The comic books gave him a chance to stretch out and work in a medium that demands a different rhythm that dailies or a theatrical cartoon.
While the book is titled after its most popular character, the strip is still Thimble Theatre. There is a complete world inside the book, a world populated by a large, theatrical ensemble.

It works in the same way that Carl Barks gave the comic book world of Donald Duck some weight and substance in the Disney Universe. As Mr. Barks did for the world of Donald Duck and the fabled community of Duckburg, Mr. Sagendorf puts solid, human characters at the center of the stories.

Popeye, Olive, and Wimpy may look silly, or not match a depth found in Mr. Barks’ best work, but we recognize each and every character for who they are.
While J. Wellington Wimpy is indeed a bum and self-confessed mooch, you still root for him to get a hamburger. His manipulative nature is can be aggravating, but is endearing as well.

The way that Swee’Pea is both a crawling infant and a little wild man with a wicked right cross is hysterical and his actions are always justified. It is something that we often wish we could do: take out the bully or thief. Olive’s jealousy when Popeye meets an attractive girl named “Miss Goldhold” is completely understandable.

And there is Popeye. Loyal, always willing to help, he is as confused and frustrated as any man has ever been. His intentions are noble and honorable, but he is as capable of mistakes as anyone else. Yes, he does love to fight, and when he does it is beyond entertaining for us all.

The art is indeed “cartoony,” but that is a great part of its charm. Mr. Sagendorf truly understands the comic medium. His background work, especially when he creates western locals or portrays scenes at night, is as interesting and creative as those George Herriman drew for Krazy Kat.

Both excelled at giving a sense of the absurd to a familiar landscape. When action occurs there is a roundness to what he shows us that seems to soften the action.

Popeye runs straight down the side of a cliff, his arms wailing in circles. Swee’Pea rides a flying dog with pointy ears and the moon is apparently inhabited by creatures who defy actual science. Olive Oyl’s body is as gangly as that of a thirteen year old. It is hard not to smile at what we see.

These tales are a big part of the rich heritage of American comics. Popeye is as great a hero as Spider-Man, Batman, and Iron Man. And he is a lot funnier, which is a hard act to pull off.