Popeye: The Classic Newspaper Comics by Bobby London Volume One: 1986–1989 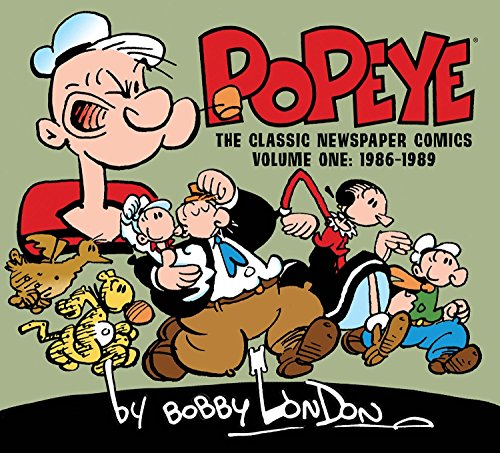 “This is a great collection in the same way that Frank King and Dick Moore’s work on Gasoline Alley in the early sixties was beautiful. The two strips speak to both ends of America: the relatively normal and the relatively rebellious. Mr. London serves the legacy of Mr. Segar and Mr. Sagendorf with brilliance, wit, and originality.”

One of the last places you could ever expect to find up to the minute social commentary would be a Popeye comic strip. But for the last few years of the eighties that wonderful squinty-eyed sailor with the distorted arms held court over one of the funniest gag-a-day strips ever seen.

With a mixture of political and pop culture references combined with a healthy respect for the past history of Popeye, artist and writer Bobby London changed the way that Popeye operated in the world of newspaper comic strips.

Popeye: The Classic Newspaper Comics by Bobby London Volume One: 1986–1989 holds the first half of Mr. London’s six-year run on the strip. In the voice of one of the most iconic of comic characters ever created, the artist shows us just how absurd and silly much of that decade actually was.

In just the second strip in the collection he moves Popeye away from the more traditional and timeless and drops him straight into the modern day.

After returning home from his first day at school Swee’ Pea is crying. Olive is not sure why. Popeye tells her that her poor little nephew is crying because he has been mistaken for a Cabbage Patch Kid.

By the end of this first week Mr. London has used the troop of Thimble Theater to make jokes about Rambo, Rent Control, punk fashion, and McDonalds. Eventually this topicality, this willingness to add a slightly stinging note of comment inside one of the most beloved and familiar of strips would cost him his job.

Previous artists on Popeye would occasionally make such up-to-the-minute and topical jokes, but Mr. London was something new. The Popeye he drew and wrote is a salad of the surreal, fantastic, imaginative, timely, vaudeville, burlesque, and the very real.

The first year is a two panel gag-a-day strip. Looking backward he eventually expands on the strip’s origins as Thimble Theater by bringing longer storylines into focus.

We also see the full-time return of characters such as Olive’s brother Castor Oyl as well as her former boyfriend Ham Gravy. With a wild sensibility Mr. London takes full advantage of the fourth dimensional qualities of the Jeep and also portrays Alice the Goon and Wimpy in ways that will make you howl. Popeye’s Pappy becomes a kid as we see him get addicted to video games, skateboarding, and making jokes about living off of Social Security.

There are new characters as well. One, Sutra Oyl, perfectly captures Mr. London’s sense of comic history and modern sensibility. Her buxom image is a sly take on Al Capp’s disproportionate damsels of Dogpatch while simultaneously tying herself to the Oyl family.

Sutra makes a beeline for the sailor, but she finds that he is true to Olive. But Olive, as witnessed by her occasional dalliances with Brutus over the years, has always had a wandering eye.

At one point she begins dating a young man named Nerdley. He is the typical New Age punk. He thinks he is cool, but he is really just that year’s cliché. When he breaks up with Olive he tells her that it is because she likes MTV, and he likes Wheel of Fortune.

Where Sagendorf’s style on Popeye gave the trip a charming “cartoony” feel. Mr. London’s line adds a kinetic sense of urgency. Combined with the large cast his style returns the daily to E. C. Segar’s original concept of the strip as a theater.

Mr. London’s roots are in underground comics. While some would focus on the adult like nature of much of what he did during those early days, those who understood comic art could see that he was always clearly grounded in the tradition of newspaper’s finest artists.

The influence of classic works such as George Herriman’s Krazy Kat are apparent. Strips where the Jeep takes Popeye to the fourth dimension are especially evocative of Cliff Sterritt’s art for Polly and Her Pals.

As enjoyable as Mr. London’s line is, there is something amazingly funny in seeing Swee’ Pea play with a Transformer or having the Sea Hag in Reeboks.

There are jokes about specialty coffee shop and the earliest days of portable phones that hit home almost thirty years later.

One memorable exchange involves talk radio and you would swear that Popeye is getting ready to pounce on Howard Stern. Mr. London has little patience with the fashion of the day as the evolving punk culture is held up to the same ridicule as the Stock Exchange.

No matter how modern some of the jokes seem, there is still the vaudeville of bald jokes, the size of Olive’s feet, modern fashion, the occasional pun, and slapstick.

Despite the freedom that the Syndicate gives him, and the brilliance of what he creates, Mr. London eventually runs afoul of their standards. After just six years he is famously removed from the strip for a story that is seen as an allegorical comment on abortion.

No one could sum this brief period of Popeye’s history up better than the love of his life, Olive Oyl. When Popeye declares in his own inimitable way “I yam what I yam an’ that’s all that I yam!” the thinnest woman in comics declares “He’s so existential!” as perfect cartoon hearts fly from her body.

He and Olive even go out for sushi.

This is a great collection in the same way that Frank King and Dick Moore’s work on Gasoline Alley in the early sixties was beautiful. The two strips speak to both ends of America: the relatively normal and the relatively rebellious. Mr. London serves the legacy of Mr. Segar and Mr. Sagendorf with brilliance, wit, and originality.