The Politics of Voter Suppression: Defending and Expanding Americans' Right to Vote (A Century Foundation Book) 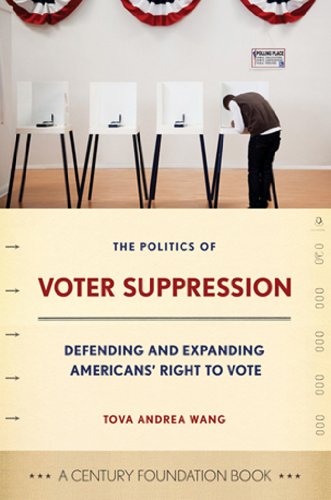 “. . . reasoned and prudent approach . . . take her warnings regarding the inherent dangers of voter suppression politics seriously.”

The history of democracy is defined by two principal issues. First, the gradual expansion of the right to vote; second, the elaboration of rules ensuring democratic policies balance various interests and protect minority views.

Voter suppression politics represent an attack on both of these principles insofar as they are designed to bar specific groups of voters from voting a specific party.

This is well illustrated by Tova Andrea Wang’s book The Politics of Voter Suppression, a short but comprehensive history of how both Republicans and Democrats have tried to undermine the right to vote at different times in American history.

In the 19th century both Democrats and Republicans engaged in voter suppression policies, Democrats in the South, Republicans in the North. The elimination of the poll tax in the early 20th century represented a major step toward more democracy.

Yet the biggest quantum leap came with the Civil Rights Act of 1964 followed a year later by the Voting Rights Act. This outlawed discriminatory practices for determining voter eligibility, such as the requirement to pass a literacy test. Such practices were quite widespread at the time, especially in the then Democratic South and were clearly meant to prevent African Americans from voting.

One would think that was the end of the fight to expand and defend Americans’ right to vote. It should have been—but was not.

Indeed, as shown by Ms. Wang it was instead the beginning of modern voter suppression politics—even more perfidious than the ones practiced prior to the 1960s. They range from the requirement to provide specific forms of voter identification on election day to “vote caging,” whereby voters’ eligibility is challenged alone on the basis of failure to respond to specific mailings or following a change of address.

Today it is the Republican Party that is most actively engaged in voter suppression policies. This, according to Ms. Wang, is “an ironic and even perverse revision of tradition.”

In the pre-Civil Rights era it was Democrats who often pursued anti-democratic and racist politics. At the time, Republicans, after all the party of Abraham Lincoln, represented the defenders of both federal democracy and the right to vote.

But as more African Americans migrated in the North and the Democratic Party began to purge itself from its Southern racist traditions, a “shift of allegiances” occurred. As a result, “Republicans, so long beaten at the polls in the South because of the exclusion of African American votes, now adopted and refined the very same Democratic Party tactics to secure partisan success.”

Tova Andrea Wang is not prepared to support all electoral reform proposals at face value. For instance, she thinks it is still too early to allow e-voting considering the risk of fraud. Her reasoned and prudent approach is one more reason to take her warnings regarding the inherent dangers of voter suppression politics seriously.

Every vote counts—especially at times like ours when the political climate is polarized. In absolute terms, the number of suppressed votes might appear small. In percentage terms, it may lie within the margin of error.

But that margin might turn out to be what separates winner from loser in the 2012 elections.