A Politics of Love: A Handbook for a New American Revolution 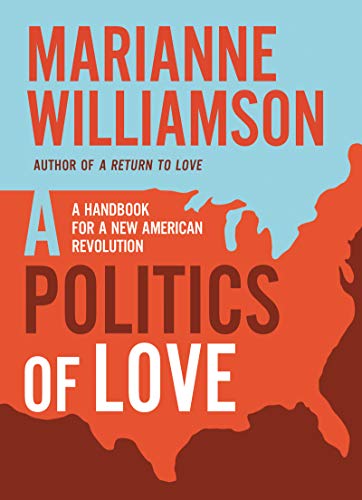 As the absurd horror of the beginning of the end of democracy intensifies (followed by sustainably organized life on Earth), agreeing even with those we basically agree with is increasingly challenging.

Even to most candidates potentially leaning comparatively toward the left of their base, the Democratic Presidential Primary’s contest of personalities is given more cultural and economic attention than climate change, nuclear weapons, and other threats to history and the future.

Marianne Williamson recently announced her bid for the Democratic nomination. She has been gaining more attention and recently reached the national debate stage, distinguishing herself as a spiritual leader, hoping to create and revive a culture of “love” in American politics.

Unfortunately, A Politics of Love reads like the kind of writing it is: a lofty campaign speech.

Williamson seems to grasp the many existential crises bearing down on the future. To her credit, she is among too few candidates willing to acknowledge explicitly enough that climate change is a threat to not-so-long-term human survival. However, her explanations of how American politics is lacking love among the population or how to make love a political force are vague. Williamson writes that American politics needs neither more progressivism nor more conservatism, but rather “a more deeply human politics . . . a politics of love. Love is the angel of our better nature, just as fear is the demon of the lower self.”

She writes multiple times that love causes “miracles,” which could alleviate or end our current suffering and impending collapse. Williamson offers reasons for which we need this political “love” and provides examples of what she thinks it is, but never clearly defines the terms “love” or “miracles” in the book.

In addition to her willingness to acknowledge climate change as a threat to sustainable human life, to her credit, Williamson also has useful thoughts on reparations and education. But overall, her analyses of the political climate, the history of American imperialism and democracy, and her proposed solutions (or lack thereof) are built on contradictory platitudes and romanticized references to the history of corporate American politics.

Williamson’s book can be useful to sustain or encourage the emotional well-being of some leftist readers—and should be used as such when possible—but exploring some of her platitudes is worthwhile.

For example, Williamson correctly acknowledges that, “Nazis, white supremacists, and terrorist organizations . . . represent hatred harnessed for political purposes,” and “are as potentially dangerous today as . . . at any other time.” But her understanding of the meaning, prevalence, and character of “hate” in American politics is highly speculative and feels misleading:

“Such hate-filled groups,” she writes, “do not represent—either in America or in the world at large—anything near a majority of the population.” She claims further, “The problem is not just that some people hate, however. The problem is that those who hate have a way of hating with conviction. Conviction is a force multiplier.” She explains this point with a brazenly vague assertion: “I can’t imagine a terrorist who’s kinda-sorta-sometimes-when-it’s-convenient committed to hate. Yet who among us has not at times been kinda-sorta-sometimes-when-it’s-convenient committed to love? Hate has shouted, while too often love has only whispered.”

Williamson nowhere in the book backs up the claim about whether or not “such hate-filled groups” make up a majority of the country or the world. That she doesn’t support that claim or elaborate is secondary, however, to how the statement’s framing—which is also the foundation of the statements that follow —renders each of the claims meaningless.

For example, What is Williamson’s definition of “hate-filled?” Must one be a “terrorist,” white supremacist, or Nazi, who “shouts” “with conviction,” in order to act in ways that are politically hateful in Williamson’s mind? She seems to suggest that terrorism and openly white supremacist Nazism are the most prevalent forms of political hatred. But does hate not whisper all around us—in people who love their children, their neighbors, their coworkers, in millions who believe they want what is best for the world but, whatever their reason, support politics of hate?

While she is correct to say that “hate-filled,” “Nazi” groups are as dangerous as at any time, mainly because of nuclear weapons and climate change, it is far too ambitious to claim that they are the most influential hate-politics in American culture among the general population, with the most “conviction.” It would be easy to speculate on an argument against that claim, but making any such broad assertions about such a complicated electorate without substantiation is not worthwhile. At best, one is guessing. What follows are some examples of how Williamson contradicts her own claim that political love is like a noncommittal “whisper” and hate more like a shout of conviction:

She writes of having dinner after a sermon with four church congregants who supported Trump in 2016. She does not describe them as shouting Nazi terrorists. Rather, “they didn’t particularly care for the president as a man, but they liked what he was doing for America. Where I saw an attack on the press, they saw ‘standing up to fake news;’ where I saw the dismantling of environmental protection, they saw ‘needed deregulation;’ where I saw the words of an authoritarian dictator, they saw a man who ‘doesn’t really mean those things.’” Her description of these four Trump supporters shows the opposite of her claim that hate shouts with conviction and love whispers. Many shout and cheer languages of love and justice that conceal or are manufactured to legitimize hateful consequences of policies.

Williamson also describes having two “close girlfriends” who support Trump, and also does not describe them as shouting, hateful people. In fact, her only descriptions of voters who support political agendas of hate are examples of interpersonally decent people who quietly, insecurely, politically think and act with a whispering hatred, particularly toward minorities. Though it reads somewhat glaringly, she does not acknowledge the contradiction. The people she describes are good congregants, good girlfriends, good neighbors, largely politically ambivalent but who express hate when pressed to think and act politically.

In other words, while Williamson may be correct that it’s difficult to imagine an indecisive terrorist half-committed to hate, she does not acknowledge that it is easy to imagine a half-committed, conflicted everyday American voting for Trump. The quiet hatred in millions of many such voters seems far more widespread and impactful than the threat of “terrorists.”

Further, writing on the 2016 election, Williamson misleads: “A massive cry of economic despair was going to make itself heard—whether in support of a progressive populist such as Bernie Sanders, or an authoritarian populist such as Donald Trump.” She claims that neither Sanders nor Trump “necessarily had better plans for dealing with all that suffering than . . . Hillary Clinton . . . they’re the only two candidates who acknowledged all that suffering.” Again, Williamson does not substantiate or elaborate on this claim. Such a framework does not sufficiently take into account how Sanders distinguished himself from Trump and Clinton mainly by consistently campaigning on clear policy proposals rather than simply on the rhetoric of suffering.

While Williamson is correct to note that political leaders must learn to hear and speak to the suffering of their potential base, her assessment of the election disregards the fact that many of Sanders’ most important campaign proposals now poll very well with the population and are far more popular with mainstream Democrats than before 2016, such as Medicare for All, which seemingly contradicts the claim that Sanders’ rhetoric on suffering, rather than his “plans,” caused voters to respond positively to him.

Indeed, many of Sanders’ policy proposals poll much higher than Sanders himself. Since Williamson shares many political concerns popularized by the 2016 Sanders campaign, her above assessment of the 2016 election is part of a larger problem with her book, which is that Williamson makes an effort neither to distinguish nor align herself with Bernie Sanders and Elizabeth Warren in the primary, who both make a point of pushing forth consistent and clear policy proposals over motivational messaging and share similar concerns for our planet and economy to Williamson’s. In other words, Williamson lacks the clear policy proposals far more than Sanders and Warren lack the motivational speaking skills, which may make appealing to the Sanders-Warren element of the voters an uphill battle.

Furthermore, Williamson doesn’t cite any data to back up anything she asserts about the country’s massive and increasingly complicated electorate, a flaw not limited to her speculation about the 2016 elections. Instead of citing polling elaborating on many important claims, she legitimizes her presumptions about everyday Americans’ political feelings only with inspirational language, as in the following example from a section on foreign policy, in which she compares the need for holistic medicine—as opposed to solely the treatment of symptoms—with the need for increased diplomacy and pluralism instead of solely military responses to sudden violent conflict:

Beginning by referencing a claim that probably is backed up by polling somewhere (though she fails to cite any), Williamson writes. “People are clamoring for peace; too often our politicians are clamoring for war. If the people don’t inject some higher consciousness into the conversation soon, then God help us all.”

Following these claims—the “clamoring for peace” and the need for “some higher consciousness”—Williamson writes in language so vague that the reader is left to wonder if she is simply speaking of the American electorate, even the non-electorate, or just some broad version of what she herself generally imagines to be the average American.

She claims the same logic applies to issues of war and peace, writing, “We should know better than to think we can avoid taking responsibility for peace and not expect war.”

Such thinking borders on another contradiction. She opens the passage by saying that “people are clamoring for peace” but up against a handful of politicians pushing war, while closing the passage by reminding us that people—or “we”— “should know better than to think we can avoid taking responsibility” for matters of war. Which is it? Are “we,” “the people,” clamoring for peace, or are “we” the ones who “should know better”?

Williamson argues that Americans need to get back to “the basics” of “people simply loving each other.” She writes, “The good, the true, and the beautiful emerge from a quantum realm of infinite possibility, when love and intention and commitment and devotion override all the other factors.”

She continues perpetually vaguely, finally raising what would have been perhaps the most important question in the book had she answered it: “How do we make love our agenda? By making it everything.” She does not specify further before adding, “The miracle that will take us forward now is a 100 percent commitment to being who we need to be now, and doing what we need to do. We must not give in to the demonic chatter that life is lived for any other purpose than our capacity to love each other,” and repeats throughout the book the notion that love brings about “miracles.” She does not explain clearly how we are to make love “everything,” or what she means by “doing what we need to do,” anywhere in the book.

Overall, A Politics of Love comes off as far more concerned with solidarity around feeling better than around grassroots political organizations based on clear policies and goals. Her call for love and care in politics is noble and should not be minimized, but unless it is accompanied by clear policy proposals detailing a plan in which money and power is taken away from major financial institutions, the fossil fuel industry, and the arms industry—who hijack the political process, gamble with the economy, and threaten to end the future—and is re-invested in the health of the population and the planet, along with constant civil disobedience pushing these policies and goals, Williamson’s message and campaign seem merely aspirational.

Matthew Vernon Whalan is a journalist and writer whose articles and commentary have been published in Counterpunch, The Berkshire Edge, The Brattleboro Reformer, and other venues.