The Poisonous Solicitor: The True Story of a 1920s Murder Mystery 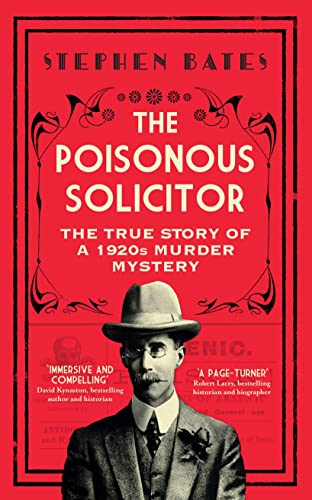 Veteran reporter Stephen Bates, who once covered both the English royals and religion for the Guardian, has since leaving the newspaper carved out an engaging and entertaining specialty: examining sensational murders from Britain’s past, especially those involving unlikely, middle-class professionals.

Bates’ first entry, in 2015, was The Poisoner: The Life and Crimes of Victorian England's Most Notorious Doctor, which earned rapturous reviews.

Now comes an equally worthy successor, The Poisonous Solicitor: The True Story of a 1920s Murder Mystery, about the only lawyer hanged for murder in modern England.

Understandably, cases like this are catnip to the plethora of true crime podcasts, streaming services, and feature film studios. Early on in the book, the Oxford-educated Bates homes in on their enduring appeal.

“A trial is always a whodunit, but before the abolition of capital punishment it was one with the possibility of imminent execution,” sometimes within weeks of the verdict, Bates writes.

This story, he says, “is extraordinarily dramatic and remains a real whodunit with many unanswered questions,” chiefly, whether Major Herbert Rowse Armstrong murdered his wife by arsenic poisoning a century ago.

Armstrong was a middle-class striver, studying law as a scholarship student at Cambridge University, where the future bishop of Herefordshire was a classmate. A major in the British Army during WWI, he served abroad for a time, but he did not see combat.

Before the war, he and his wife, Katherine, settled in the riverside town of Hay-on-Wye in the borderland between England and Wales, where Armstrong was a respected lawyer and magistrate, as well as a church warden.

Photos of Armstrong suggest an almost Pythonesque caricature of a meek, diminutive, country gentleman, complete with tweeds and a waxed mustache.

“Who would ever have thought that the punctilious little professional man—an officer and a gentleman—had it in him,” Bates writes of the murder accusation.

By all accounts, the couple had a stable, loving relationship raising three children, with no whiff of scandal. But Katherine was high strung, delusional to the point of mental illness, at least once mentioning suicide. With the concurrence of her doctor and sister, Armstrong had his wife committed to an asylum for six months, shortly before her death.

At first, Katherine’s sudden decline and death were attributed to natural causes. Only later, when rumors began to circulate, was her body exhumed and an autopsy revealed the presence of a lethal amount of arsenic.

Bates’ sympathies are clearly, if subtly, with Armstrong.

Slowly, methodically, and stealthily, he makes the case that Armstrong was likely the victim of small-town gossip, professional rivalry, and a backlash to another, similar but unrelated murder in the area in which the likely wife-killer recently escaped justice.

Bates seems to favor the defense’s theory of the Armstrong case: “The very strong probability was that Katherine had committed suicide.”

In this conclusion, Bates disagrees with his former employer, then called the Manchester Guardian, which at the time supported the guilty verdict editorially.

As sometimes happens with murder trials, a key element that likely turned the jury against Armstrong had nothing directly to do with the murder charge. Testimony in a preliminary proceeding revealed that Armstrong had been treated for syphilis, likely contracted during the six months his wife was in the asylum. And within a year of his wife’s death, Armstrong was courting another woman.

At trial, it didn’t help Armstrong that the presiding judge, as Bates observes, was strongly biased in favor of the prosecution, and kept his thumb firmly on the scales of justice.

Whether or not he poisoned his wife, Bates writes, it is uncontestable that Major Herbert Armstrong did not get a fair trial, that the proceedings were, in the author’s words, “seriously flawed.”

Covid in part limited the author’s usual, on-the-ground book research, requiring him to do much of his literary sleuthing from his home in Kent, in the south of England. Notwithstanding, his deft telling demonstrates how a seasoned reporter and researcher can accomplish a more than competent workaround, here including more than 200 footnotes.

As with most cold cases, where the principals and witnesses are long dead, Bates begins his reconstruction with the printed record: transcripts, depositions, contemporaneous newspaper and magazine accounts, including photos and newsreels. To this, he applies his own, formidable analytic skills.

The Armstrong investigation and trial took place in Hay-on-Wye, well before the village became the site of a springtime book festival. But Bates takes the coincidence of its location to place the case in a broader context. He conjures up the time and place of the murder, as well as the literary, political, and social context of rural, inter-war England.

“It was a prim, stultifying and sanctimonious society,” he writes.

Their appeal, then as now, was that they enabled “readers anxious to escape their own, humdrum lives into a world where problems could be wished away and difficulties unraveled,” Bates writes, much the same appeal as contemporary true crime has today.

Bates is a true crime practitioner with a broad but incisive view of how the Armstrong case fit in with the rise of the genre generally in the early 1920s, and this case particularly.

“What seems to be new was that readers could engage with the solution themselves. . . . Murder in this literature became a game, divorced from the mundanities of real life, or from real domestic tragedy. . . . [T]hey were perfect for a readership which now had more leisure time but relatively few alternative distractions. They simply met a need for entertainment.”

True crime, and its fictional twin, rapidly moved from the printed page to board games like Clue, then to plays and films and, ultimately, to podcasts and television. The Poisonous Solicitor is a worthy addition.