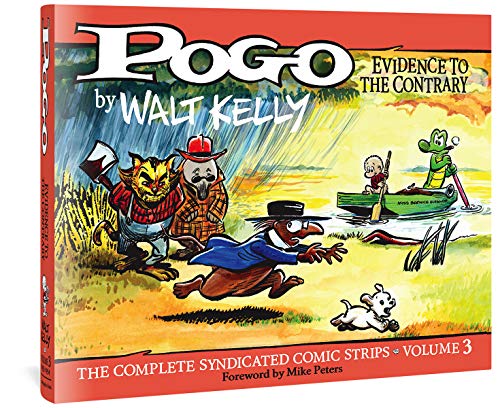 “Despite the political nature of some of the material, there is hardly a panel that wouldn’t make a child smile.”

Pogo is so richly developed in atmosphere, language and funny, funny animals that no matter how old you are, within in two panels you fall right into the world of Okefenokee Swamp.

Artist and writer Walt Kelly is justly celebrated as one of the best to ever work in the medium of newspaper comic strips. Pogo Vol.3: Evidence to the Contrary (Walt Kelly’s Pogo) is a new collection of Pogo daily pages and full color Sundays from 1953–1954 which gives truth to that often made claim.

There is so much to see inside this lush, detailed community of swamp dwellers. The art looks as if it came from the greatest of children’s literature. The words ring with the wit of Jonathan Swift while at the same they sing with the musicality of Irish poetry.

Stories flow across days and weeks as if they were written by Scheherazade, Aesop, and H. L. Mencken at a laugh-filled lunch hosted by Meet the Press.

As it had since its debut in 1948, Pogo features an owl that make jokes, a turtle singing silly songs, a worm in a bonnet knows all the angles and a possum that rows a boat with an alligator by his side as his best friend.

It also contains a devastating and, for its time, a very brave take on the then emerging influence of a recently re-elected senator from Wisconsin, Joseph McCarthy. Leading up that risky commentary are brilliant and concise observations on the then emerging world of television as well as its real reason for its existence, advertising. That just for openers.

One of the reasons that so much of what appeared in Pogo is enjoyable is Kelly’s art. In his early days as an animator he had worked on Pinocchio, Dumbo, Fantasia and other films for Disney.

Kelly also had a long run at Dell Publishing (where Pogo and Albert first appeared) creating comic art for among such child-friendly titles as The Brownies, Our Gang and Walt Disney Comics and Stories. But as his work on Pogo would go on to show, Kelly was much, much more than just an illustrator of beautiful fare for children.

When the strip debuted in 1948 Kelly didn’t shy away from placing politics in his strip. What appeared in the Pogo was occasionally satirical, but always tempered by an idea that the main focus was really human nature. Much of what he had done could be seen as a good-natured poke in the ribs.

Pogo had run for President in 1952 and would run again in 1956 with the slogan “I Go Pogo,” the campaign slogan being a polite take on real-life candidate Dwight D. Eisenhower’s easy going “I Like Ike.”

A year after that first campaign Kelly drew real political blood. This volume collects the storyline that made that definite and decisive cut. It is as much comic strip history and art as it is political history.

In 1953, after almost five years of humor based in a world of funny animals with a touch of commentary, Kelly removed the kid gloves. The subject of his commentary was clear.

The character of Simple J. Malarkey appears in Pogo as a stand in for Joseph McCarthy. At the time that this story began featuring an attack on the recently re-elected Senator from Wisconsin took nerve, real nerve.

In early 1953 not many people were calling out McCarthy for his behavior.

Certainly not on such a national platform as a newspaper comic strip. This was an attack on a man with a lot of power and a lot of powerful friends by a man who drew talking ducks, fairies and Santa Claus.

The storyline caused a national uproar. By 1954 The Providence Bulletin was threatening to cancel the strip if Kelly didn’t stop portraying McCarthy in such an unflattering light.

Kelly’s response was very specific. On October 5, 1954 Malarkey sees a Rhode Island Red Hen approaching and, fearing that he should be seen by anyone from Providence, throws a bag over his head. The effect draws up quick comparisons to the KKK and their reputations for lynching without trial and operating in secret, away from those they accuse.

In 1954 that’s a hell of a middle finger. Especially when it appears on the comic page of a daily newspaper.

As Mike Peters (creator of comics of Mother Goose and Grimm) writes in his foreword “While Edward R. Murrow and Herblock are credited with exposing the evil of McCarthyism, Walt showed him for a fool.”

Kelly worked on so many levels. His writing flies by at a million miles an hour. Filled with allusions, puns, direct references, poetry and song. Kelly mined laughs from the most unlikely sources imaginable.

While the Beauregard Bugleboy, the strip’s big old hound dog collapses from running over a vast distance to tell Pogo and Albert news, he references the horseman’s journey between the European towns of Aix to Ghent. Which is also is a reference to Robert Browning’s famous poem celebrating the difficulties of such a journey. Pogo then punctures the Hound’s delusions by reminding him that Roland was a horse.

The hound’s self-importance is then offset again by Albert’s singing “I took a freighter to Dacatuer to see Rose . . .” essentially equating the historical importance of the horseman’s journey with a dirty poem.

This volume is a true work of love and is perfect for all ages. Kelly’s daughter Carolyn not only served as an editor (with Eric Reynolds), she also painted the cover art. Despite the political nature of some of the material, there is hardly a panel that wouldn’t make a child smile.