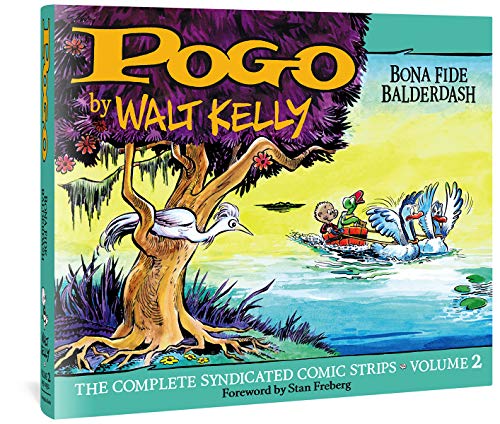 Inside Pogo artist and writer Walt Kelly brings us an imaginative world that equals anything ever created by Lewis Carroll, L. Frank Baum, or J. M. Barrie.

Justly celebrated for its ability to poke a finger at the pomposity and delusions of politics and government, Pogo is actually much, much more than this.

It is a world of fantasy and fairy tale where a possum and an alligator are best friends. An owl dispenses advice. Bunny rabbits and adorable, smart-alecky mice pop up from nowhere to add caustic comments or insightful observations. A tiger escapes from a circus and pilots a boat across a swamp. A bear dresses with the self-importance of the most preening politician, and a lady beaver bemoans a time when women could assemble on their own.

Like the greatest of myths and fables, Pogo travels across time and ages. It is a world much like that of Aesop and trickster tales. It is a world capable of making a six year old smile with glee, a hipster smirk whether they want to or not, and a college professor laugh out loud.

This is the second volume in Fantagraphics’ chronological reprinting of Mr. Kelly’s complete run of Pogo. In one stroke of a pen he could deftly skewer both national politics and human frailty while still leave us smiling. As a writer he was a master at tweaking both our collective and individual egos. As an artist few could surpass his way with a pen and pencil.

By the time Pogo hit newspaper syndication in 1948, Walt Kelly was already one of the most respected artists in the comic field. After leaving the animation studios of Walt Disney, where he had worked on Donald Duck cartoons as well as the films Pinocchio, Dumbo, and Fantasia, Mr. Kelly had built a career as a comic book artist for Western Printing and Lithography and the line of Dell Comics.

Issues featuring cover art he created for Walt Disney Comics and Stories as well as his work on various holiday and fairy tale themed books are still prized by collectors today. His imaginative Christmas and Easter stories sing with the joy a child finds in the holidays.

The version of Santa Claus he drew for Dell builds on the established work of Thomas Nast and Haddon Sundblom (who did the famous Santa art for Coca-Cola) and moves the iconic image of St. Nick even further into its own mythology. An obscure advertising promo book that Mr. Kelly created for Peter Wheat Bread is one of the most beautifully drawn tales you could ever hope to see.

Mr. Kelly’s run on Our Gang (recently collected in four volumes by Fantagraphics) stands as one of the greatest kid comics of all time.

So graceful is his work with pencil and pen that you could loose yourself for hours in shear artistry of the panels he constructs. The way he could convey even the subtlest of emotions across the characters he drew is a gift to marvel at.

Matching his skill with a pen and pencil is the way Mr. Kelly created stories moving seamlessly from one level to another. In his hands the English language could hang in the air, stretching and spinning, rolling and tumbling until you realized that there could be three or four meanings to his words.

While the joke telling may approach the speed of Vaudeville, nothing ever feels forced. Mimicking the languorous pace of the South, Mr. Kelly wasn’t in any hurry to rush the reader. The residents of Okefenokee Swamp speak the English language with an unidentified dialect but one that we can easily understand as American.

His strips are so filled with subtext and jokes that the back of the book holds a ten-page glossary to help us dig into the Mr. Kelly’s verbal artistry.

In addition to the meticulous restoration of each daily and full-color Sunday strip, Fantagraphics brings as much as they can to their reprinting of Mr. Kelly’s work. Slip off the dust jacket and you will find a beautifully embossed cover featuring a bird perched in the trees and overhanging vines, a quietly stunning image that seems to be saying “This way to the best comics can offer.”

There are also a dozen pieces of original art showcasing Mr. Kelly’s working method. Seen in an oversized setting you get a real feel for how gifted he was as his lines seldom seem overthought. Other features include a table of contents listing each week’s storyline as well as writer and historian Mark Evanier’s insightful summation of Mr. Kelly’s life.

The only complaint that could be found in the Pogo reprint series is that the second volume took a year to release. This is due to Fantagraphics’ desire to use the best sources possible for obtaining the artwork. Dealing with multiple collectors, museums, and fans takes time, but the final result is well worth it.