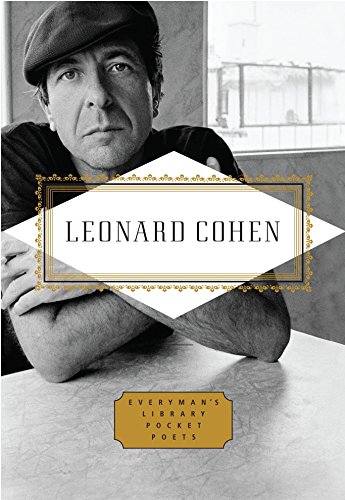 The publication of this physically small book puts Canadian poet and songwriter Leonard Cohen in the company of the most beloved poets in the English language. Other authors in the Pocket Poet series include Shakespeare, Donne, Milton, Marvel, Wordsworth, Byron, Shelley, Keats, Emerson, Whitman, Dickinson, Rosseti (Christina not Dante), both Brownings, Tennyson, Frost, Stevens, Eliot, Hughes (Langston not Ted), Auden, and Plath.

The flip side of this honor is that a life’s work spanning half a century is compressed into a selection chosen by someone else in which each of Mr. Cohen’s previous ten books is represented by only a handful of poems, and though a larger fraction of the song lyrics from twenty albums make the cut (these two categories overlap, since the lyrics often start out as poems) such early favorites as “The Stranger Song” and “Seems So Long Ago, Nancy” are conspicuously missing. A better title for this book would be “A Leonard Cohen Sampler,” especially since the title of this edition closely resembles the subtitle of Stranger Music, Mr. Cohen’s previous (1993) volume of selected poems and songs.

Readers seeking a larger selection of Mr. Cohen’s work would do well to combine Stranger Music with his 2006 Book of Longing. This book has a table of contents and an index of first-lines, and the poems and song lyrics are presented in chronological order, but unlike Stranger Music whose table of contents is organized chronologically by book or album title, here there is no indication in which book or album the poems and lyrics first appeared.

At six inches by four inches with a lovely black ribbon bookmark, this is a natural gift book. But since Mr. Cohen is a love poet of doomed relationships and fleeting encounters it is not a gift partners in long-term stable relationships are likely to give one another; in fact, doing so might signal that something is amiss. Rather, its size makes it the perfect gift for limerent illicit lovers to exchange while parting at bus or train stations, airports, or hotel parking lots. Fans of Mr. Cohen’s work who want to keep a hard copy of his work on hand at all times might want to buy the book for themselves even if their libraries already include all his earlier books and albums.

Of the poets mentioned in the second sentence of the first paragraph of this review Mr. Cohen, an anti- or at least reluctant modernist, probably has the least in common with Wallace Stevens and T. S. Eliot. Some of Mr. Cohen’s early literary verse has a formal, old-fashioned quality that makes his subsequent career as a songwriter seem a natural next step. In the last two decades many of his poems/lyrics are written in dimeter rhymed quatrains, which readers who only encounter them on the page may find repetitive (such readers may want to find the songs on YouTube and read along while listening to Mr. Cohen’s singing, but since his songs exist in numerous versions they may find discrepancies between the words sung and those printed on the page). In both genres throughout the book we find Mr. Cohen’s melancholy tone, ironic pessimism, religious spirituality, and sardonic humor. Who else would rhyme “What’s it to you?” with Hallelujah?

Most of the song lyrics are presented in verse, but several, including “Lady Midnight” and “Famous Blue Raincoat,” are presented as rhyming prose. The book also contains challenging and compelling literary prose poems, including several from Mr. Cohen’s 1978 book Death of a Lady’s Man (a title coyly similar to his album of the same year Death of a Ladies’ Man) in which each prose poem concludes with its own commentary, and several psalm like religious prose poems from his 1984 volume Book of Mercy.

Mr. Cohen’s regret that his romantic relationships failed to mature into enduring marriages is a theme through much of the book. The title poem of Death of a Lady’s Man concludes,

“So the great affair is over
but whoever would have guessed
it would leave us all so vacant
and so deeply unimpressed.
It’s like our visit to the moon
or to that other star:
I guess you go for nothing
if you really want to go that far.”

The next poem, “This Marriage,” is a prose poem that opens with a marital fight. It is too long to quote in full, but here are its commentaries:

“This marriage is locked. It is impossible to enter. It is a marriage and operates like one, healing itself the moment it is condemned. In every house there is this marriage, which cannot be explained. In our day it appears fragile and easily violated, but it is the profoundest institution, and one into which no stranger can intrude.

“He hangs a crown over his filthy kitchen and expects us to put our hands together and say grace.”

A decade and a half later in the song “Waiting for the Miracle,” Mr. Cohen writes/sings:

“Baby, let’s get married,
we’ve been alone too long.
Let’s be alone together,
let’s see if we’re that strong.

“Let’s do something crazy,
something absolutely wrong
while we’re waiting
for the miracle to come.”

When not addressing a human lover Mr. Cohen addresses God, a word he has spelled with a hyphen in place of the vowel since attending an Orthodox Jewish high school (to this day he does not perform on the Jewish Sabbath). One of the psalm-like prose poems from Book of Mercy is “All My Life”

“All my life is broken unto you, and all my glory soiled unto you. Do not let the spark of my soul go out in the even sadness. Let me raise the brokenness to you, to the world where the breaking is for love. Do not let the words be mine, but change them into truth. With these lips instruct my heart, and let fall into the world what is broken in the world. Lift me up to the wrestling of faith. Do not leave me where the sparks go out, and the jokes are told in the dark, and the new things are called forth and appraised in the scale of the terror. Face me to the rays of love, O source of light, or face me to the majesty of your darkness, but not here, do not leave me here, where death is forgotten, and the new thing grins.”

And a more recent lyric, the next to last in the book, “Born in Chains,” has the following refrain:

Mr. Cohen’s faith in God does not extend to human civilization. The title song from his 1992 album The Future is dystopic:

“You came to me this morning
And you handled me like meat
You’d have to be a man to know
How good that feels how sweet
My mirror twin my next of kin
I’d know you in my sleep
And who but you would take me in
A thousand kisses deep.”