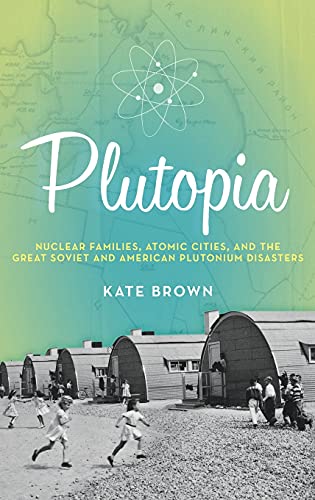 “. . . history told through the voice of drama and investigative reporting.”

What happens when a perceived utopia—whose delightful ambiance “generated happy childhood memories, fertilized in excellent schools and prize-winning model communities,” with unlocked doors, “children running safely, friendly neighbors, and the absence of unemployment, indigents and crimes”—all made possible by the engendered prosperity of the nuclear arms race—suddenly becomes a diametrically different reality?

Plutopia is the arresting, engagingly narrated story of the precarious—and ultimately perilous—parallel paths of two places located in diametrically opposite physical and political place systems: Richland in eastern Washington State and Ozersk in the southern Urals of Russia.

Both scenes of great plutonium disasters, the two have more commonalities than their countries’ Cold War enmity. Despite the places’ scientific brilliance, evidenced by a high count of PhD’s resident there, for decades their citizens were ignorant about the massive environmental contamination going on around them.

Kate Brown skillfully mixes Cold War policy assessment and associated political intrigue with sociological study of the lives of those who lived and worked in those places, probingly writing how “the expensive cultural interface of Richland and the highly subsidized, industrializing countryside . . . represented what was new, vital, dynamic about the interior of the West. The city’s prevailing culture . . . had the power to mute doubts, override fear, and squelch rumor and plain fact alike . . . it helped people have faith in their compact with science and progress, no matter what those brought.”

The residents of both places lived “among several reactors, they built family-centered, consumer-oriented communities where working-class people would…live like the middle class.” The people of Ozersk and Richland exchanged self-determination for middle class prosperity. Richland had “no property, no free market” Ozersk “existed secretly, off the map, behind fences; every resident required a special pass to live there.”

Notwithstanding giving up personal autonomy and self-government, “strangely, residents appeared to like these restricted arrangements . . .” in Richland in the 1950s voters in two separate elections turned down incorporation, self-government, and free enterprise. In Ozersk, in the late 1990s, “95% of those voters polled wished to keep their city’s gates, guards, and pass system.”

Frank Mathias selected “Hanford, Washington, for the world’s first plutonium plant because it presents the futures he sought, plentiful supplies of clean water from the Columbia River, a sure source of electricity, a high percentage of government-owned land, a certain scent of failure.”

Concurrently, the Russians plutonium initiative derived from a “World War II Soviet espionage ring in the United States . . . which discovered atomic secrets. The Soviet utopia was conceived and made in the American image . . . Soviet leaders also created a community of secret plutonium workers secured both physically and financially “supported” by lesser communities of workers, prisoners, soldiers, servicing the Utopia and spreading radioactive contamination flowing from that plant.

On the other side of the world, a similar, though very different, culturally congruent pattern of apparent wellbeing, coexisting alongside impending disaster, prevailed: “Crusading citizens” concerned with “issues related to families and consumption,” somehow, “did not notice the villages of Ozersk languishing in a contaminated zone three miles away…designs dividing plutonium opposition farmers and construction workers who supported them, worked to create discrete spheres of knowledge, distinct realities, one of confused, dislocated communities caused by illness and poverty,”

Exploring “the plutonium disasters,” Kate Brown writes of how rising statistics of disease, contamination, pollution and health risks are disregarded, discounted, or interpreted as being “within the permissible limits.” In this context, “safety was spatial, encompassed in the capaciously zoned housing lots, carefully planned shopping matrix and exclusive residency requirements . . . Richland became the public face of plutonium production. It was a soothing image. The neat preened lawns, gently curving streets, stocked stores . . . schools filled with high-performing children showed confidence and a sense of protection.”

Plutopia: Nuclear Families, Atomic Cities and the Great Soviet-American Plutonium Disasters is history told through the voice of drama and investigative reporting.

Concerning her research style, Kate Brown writes, “I have often relied on the assumption that unreliable narrators are worth a good listen because there are some accounts most people don’t believe, not because they’re not true, but because, as with mystical prophet Cassandra, society is resistant to them. So I seek out unreliable narrators and then cross-check the facts.”

As a Professor of History at University of Maryland, and thereby having greater access to sources within the United States, more of her narrative examines Richland then Ozersk. Still, her coverage of the larger forces of Soviet political intersection is most illuminating.

Kate Brown recognizes how people and places are intertwined and interdependent, for the forces that shape places, in turn, inform what happens to the people, enterprises, and causes that interact with those places. This recognition reflects her multidisciplinary approach, for as she tellingly observes, “History is still divided into ‘science’, ‘environment,’ ‘culture’ and ‘architecture’ . . . failed to unwrap the larger story of how scientific research, cultural currents, urbanization trends, territorial zoning, policy, and finance created the landscapes we call home.”

Kate Brown’s parallel stories of these plutonium places reveal the inherent vulnerability, unsustainability, and downside of silo thinking and top down dictates teaching the importance of connecting the dots.