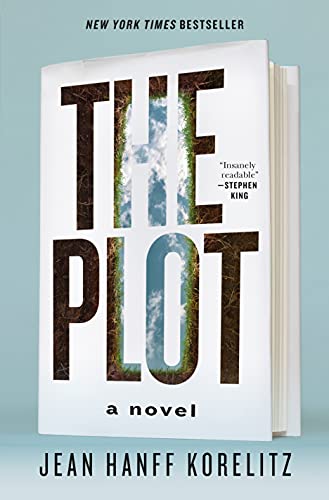 “Korelitz is skilled at dropping the clues and fixating Jake [the protagonist] on his uncontrolled desire to move forward.”

The question is: Is there a difference between plagiarism and idea theft? In Jean Hanff Korelitz’s novel The Plot there certainly is.

When one-time wonder novelist Jake Finch Bonner finds himself unable to write a second hugely popular novel and must teach an MFA course in a small Vermont college, his attitude is less than stellar. And it’s not helped when one of the students, Evan Parker, claims he has the next best story that the entire world will demand to read.

Parker disdains the need for any help and is reluctant to share anything but a few pages of the story, and a general overview of its plot, and Jake realizes that the story is, indeed, a winner.

For three more years Jake wanders aimlessly from one education job to the next, still unable to write that next bestseller, when by chance he discovers that Evan had died not long after leaving the MFA course. Curious, Jake searches for any indication that Parker’s bestselling novel was published but is unable to discover any record of it.

Surely the story must be told, and Jake recalls what he can from his few conversations with Evan and writes the story. In his mind, this is not plagiarism because he did not have access to the manuscript, and certainly it is now Jake’s creation—just happens to be somewhat similar to Evan’s. At least as Jake sees it, this is true.

Crib explodes on the literary scene, and Jake is once again on the top of everyone’s reading list with advances, book tours, and interviews galore. His personal life also takes off when he meets Anna Williams who works for a radio station and snatches Jake for an interview. The attraction is immediate, and it doesn’t take long for them to become a couple, and eventually marry.

But life is not so easy as Jake discovers when he starts to get accusatory emails claiming he is a thief and Crib is not his story to tell. The accusations continue and grow, and Jake becomes obsessed with discovering who is sending them. Although the complaints reach the ears of his publisher and agent, they assure him that this happens all the time, and he should not worry.

And yet the anonymous threats continue, driving Jake to distraction and Anna to confusion. Unable to control his obsession, Jake begins to discover clues to the person’s identity, and he follows them until he discovers who is threatening him with exposure.

Korelitz is skilled at dropping the clues and fixating Jake on his uncontrolled desire to move forward. In Jake, she has designed a protagonist who is self-centered and at times somewhat arrogant, but considering he is also designed as a mega-star with his writing success, the reader tends to ignore these characteristics.

She keeps her antagonist under wraps, even when Jake discovers the identity about two-thirds of the way through the book. And yet there is something that is not quite finished, and the observant reader will suspect who the real culprit is at about the same time.

One clever piece of plot writing on Korelitz’s part is that she inserts brief sections of Jake’s book into the story and with these brief pieces, she begins to connect Jake’s plot with reality.

Next to Jake, Anna gets the most character development as she tries to understand what is happening in Jake’s mind as his tormentor refuses to leave him alone.

Some of Korelitz’s characters are secondary to the plot—his editor, publisher, and lawyer. She does, however, give depth to other secondary characters such as Martin (Evan’s friend), the women in Vermont who own Evan’s house, the lawyers in Vermont and Georgia, and the campground owner in Georgia—who each play only a brief but crucial role in dropping clues for Jake.

Korelitz tends to write heavy in narrative with an abundance of parenthetical asides that don’t seem to be entirely necessary. That said, however, she lays out a strong story without distractions, and the reader easily turns the page to learn what happens next.

To say the end of the story is a real twist would be a huge understatement and certainly an ending that was not expected. The Plot is hard to put down and worth the (short) time it takes to read it.