Playing at the Border: A Story of Yo-Yo Ma 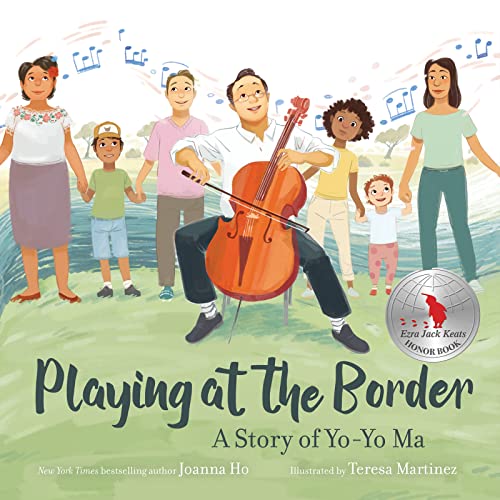 “Playing at the Border: A Story of Yo-Yo Ma is a beautiful tribute to an award-winning musician with a heart much larger than the number of albums he has created and accolades he has garnered.”

New York Times bestselling author (Eyes That Kiss in the Corners) and daughter of immigrants, Joanna Ho “used to hate it when her mom woke her up on Saturday mornings by blasting Yo-Yo Ma playing Bach’s cello suites.” In Playing at the Border: A Story of Yo-Yo Ma, Ho turns these memories into a celebration of Yo-Yo Ma, the musician, the artist, the humanitarian, and how he “uses art to push boundaries.”

As Ho describes in the backmatter, in 2018 Ma began the Bach Project, “a two-year effort to increase global connections through music. On this journey he performed Johann Sebastian Bach’s six suites for solo cello in thirty-six places around the world. Along with his concerts, Yo-Yo Ma collaborated with local community leaders at each site to plan a day of action to build a more connected future.” Playing at the Border is a story that depicts when Ma performed at the shores of the Rio Grande, the border between the United States and Mexico. On April 13, 2019, “Yo-Yo Ma made music on riverbanks that separated people into Mexican American citizen immigrant.” Because to Ma, “in culture, we build bridges, not walls.”

With free-flowing musical notes wafting across most spreads, wrap-around cover art with people joining hands, and a refrain that repeats throughout the story, “feet planted on the soil of one nation/eyes gazing at the shores of another,” Ho sets the stage for this story of uniting communities, cultures, and people and how Ma has spent his career not only playing music but also using his music to challenge conventions and expectations. Mexican-born illustrator Teresa Martinez uses soft and warm digital art to showcase this tender story of a man determined to make a difference in the world through his beloved cello.

The reader learns that Ma was a child prodigy “who chose the cello because the double bass was too big,” memorizing Bach’s notes at four years of age—long before he performed for presidents, won Grammys, became a United Nations Messenger of Peace, and accepted the Presidential Medal of Freedom. Finding “home at the intersections of cultures, where traditions are kept alive and new ideas are born,” readers also come to know how Ma “designed a garden set to song, uniting musicians across the Silk Road, and translated classical sounds into hip-hop movements.”

Even Yo-Yo Ma’s cello hails from “parts that came from lands of many languages”—built in Italy, the stick of the bow from Brazil, the hair of the bow plucked from a horse’s tail in Mongolia, the ebony frog from West Africa, the cello’s reddish wood from an Indonesian plant while the wood’s yellowish accents made by curry powder from India. “Pieces united in one instrument, one language, and nicknamed Petunia.” And Bach’s Cello Suites is an example of music spanning time. His original music, six suites for solo cello, was lost and all but forgotten until “it was rediscovered in a secondhand store in Spain, then recorded, revived more than two centuries after it was written.”

Backmatter provides additional information about Yo-Yo Ma, the Artist and Creator of Change, The Bach Project, The Bach Cello Suites, and Petunia (the cello), lists reading and video resources, and ends with a lovely Author’s Note.

Playing at the Border: A Story of Yo-Yo Ma is a beautiful tribute to an award-winning musician with a heart much larger than the number of albums he has created and accolades he has garnered. “Fingers flying over four strings, Yo-Yo Ma made improbable melodies, a harmony of notes, a symphony of sound, from a single cello. He played at the border between nations, between cultures, between languages, between centuries, and built a bridge.”

Michael Genhart is a staff reviewer for New York Journal of Books.