Playboy Swings: How Hugh Hefner and Playboy Changed the Face of Music 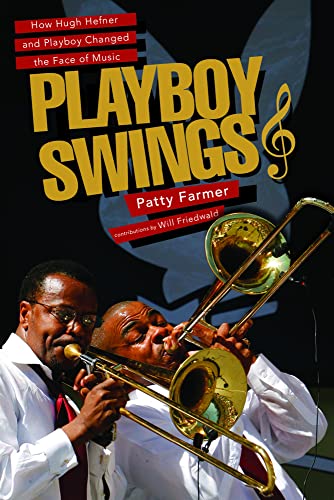 Like the magazine she celebrates, Patty Farmer’s Playboy Swings! How Hugh Hefner and Playboy Changed the Face of Music is a cocktail party that you never want to see end.

While the focus is on the music, Farmer also fills the book with tales from all corners of show business.

There are backstage stories from hotels, offices, stages, and the kitchens of the Playboy Clubs. Stars such as Lily Tomlin, Tony Bennett, Sonny Rollins, Dick Gregory, Mitzi Gaynor, Lainie Kazan, and the late Joan Rivers all give first-hand accounts of the action on the set of the TV shows, clubs, and mansions.

Next to the stars there are warm and loving but very real testimonials from former bunnies, second-tier comics, musicians, and employees from upper management over to regular staff.

This may look like light, breezy history but it is written with insight and a surprising depth. Farmer writes of the serious problems with racism when Playboy clubs in New Orleans or Miami, the claims of sexism from feminists, payouts that needed to be made in order to get liquor licenses and even the possibility that the clubs were helped by organized crime are indeed addressed. But they are not the focus. They are just part of the story.

Part of Hef’s vision was to create a lifestyle, one that he himself aspired to. As he did he created a brand that is as American as Disney and Coca-Cola. Where Disney has mouse ears, Hef had Bunny ears. Playboy is a brand that is as easily recognizable on the streets of Tokyo as it is in the Quarters of New Orleans.

Farmer points out that an unheralded aspect of Hefner’s brilliance was his ability to hire someone who knew what they were doing and, in general, leave them alone. The man knew how to envision a table, but he didn’t exactly know how to use a hammer.

He understood what he wasn’t. And understanding his own limitations, he wasn’t ashamed to reach higher. That was part of his message and the dream behind Playboy.

In creating the world of Playboy he let men know that “Hey, I did this, you can too! You can get girls like this. You can read Ray Bradbury and appreciate the paintings of Leroy Neiman. You can dress in the finest clothes if you spend wisely and operate with discreet taste.”

The early part of the story shows how Hef grew into the role of the easy-going, pajama-clad millionaire tycoon. As he created a lifestyle, as his audience became educated, Hef did as well.

Playboy’s appreciation of Jazz grew as the genre was shifting from the Dorsey Brothers (the subjects of Playboy’s first article about jazz) and swing into a world of dark clubs and mystery featuring a soundtrack of Miles Davis cool. Within a few years of publishing the first issue in December, 1953, Playboy had become the most vocal supporter of jazz in the wider base of American media.

Soon the reader in Boise, ID, knew who Dave Brubeck and Sonny Rollins were due to the copy of Playboy he had hidden in the bottom drawer of his desk, so carefully positioned just under the copy of U. S. News and World Report.

Hef knew that Down Beat, the number one magazine devoted to Jazz, a magazine that was far removed from the general culture of the times, had a credibility that Playboy didn’t. As the coverage of jazz in Playboy grew, the first Playboy All-Time All-Star Jazz Band was created by Jack Tracy, who was also the editor for Down Beat.

The success of the magazine led to the creation of the Playboy Clubs. In time there were 22 Clubs across 22 cities. Chapters pay special attention to Chicago, New Orleans, Miami, and New York. When the clubs move overseas Farmer covers Tokyo and London as well. The Lake Geneva Playboy Club and Hotel in Wisconsin is the natural result of so much expansion.

These clubs and hotels needed entertainment and a circuit for entertainers develops. This is as much a story of that circuit as it is about the people who traveled those roads.

The problems of race are never far off the page. The TV show Playboy Penthouse the show is forced to fold after less than two years when stations in the South refuse to carry a show that features African American performers.

The great and today, nearly forgotten, comedian Dick Gregory credits Hefner’s color blind attitude toward talent as the reason that his salary went from $1,800 dollars a year to $3.5 million in a single year.

Hired for a single show Gregory’s first performance was so great that they hired on the spot for two more weeks. At that time in America a black comedian could appear on TV but he was seldom, if ever, engaged by the host. Shortly after his success at the Playboy Club, Gregory was the first black man to sit on the couch on Jack Parr’s show and engage in discussion.

The comedians featured in the club were as much a part of the action as the singers and musicians. There are delightful stories featuring Lenny Bruce, George Carlin, Steve Martin, Jerry Van Dyke, an assortment of Sheckys, and especially Professor Irwin Corey.

The memories shared by Lily Tomlin of her early days in improv which led directly to her being hired to perform at the Playboy NYC Club are priceless.

This is club life as if you were there. There are star tantrums, tales ripped from the bottoms of Bunnies, drunks yelling racial epithets and performers rising above the occasion to become stars. This is the well-told tale of people who sang, worked, and played magnificently.