Play, Louis, Play!: The True Story of a Boy and His Horn 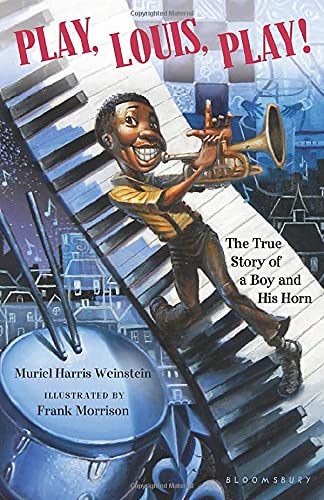 Louis Armstrong was (and still is) a popular figure in 20th century American jazz. In the mainstream world, he is probably most well known for his recording of “What a Wonderful World,” which is sad because that is not a good representation of his musical style (nor is it the best arrangement of that particular song).

It is interesting because Muriel Harris Weinstein’s book falls into this same category: it is almost good. The premise of the story is great: the narrator as Little Louis’s first horn. Really, who would not want to be Louis Armstrong’s first trumpet? (Feel free to choose to forget that trumpets have little devices called a spit valves . . . enough said.) But how can a horn who lives in pawnshop tell what happens in Louis’ home? The omniscient point of view in this situation causes the book to be uneven and it struggles to be effective.

Also the author’s tone of voice is somewhat patronizing. It seems like Weinstein is trying to be light and funny, but instead it comes across as talking down to her target audience (who her publisher lists as children ages 7–12). Kids are savvy and they can tell when adults think they are smarter only because they are older. Just because a book is written for children, does not mean adults cannot enjoy it as well. A well-written book is a well-written book, no matter who its target market is. To see how this humorous, light tone of voice is executed properly in a children’s book, see Lemony Snicket’s A Series of Unfortunate Events (if you dare).

It was also a little shocking to see the world “colored” used as a description for African-American people. In a period piece for adults this might still be functional. However, with Play, Louis, Play the only aspect of the work that is dated would be the use of colored, and this also adds to the book’s uneven feeling. It might have been acceptable if Muriel Harris Weinstein were an African American herself. Unfortunately, according to a brief bio in The Cortland Review, Weinstein is a grandmotherly Caucasian woman, so her terminology is completely outdated—especially for a younger generation of children who did not grow up with that demeaning term.

On a lighter note, one fun fact that entertained this reviewer was the etymology of Louis’s nickname: Satchmo. As anyone who has seen a picture of Louis Armstrong can attest, the man had a rather large mouth (all the better for playing trumpet with, my dear). His mouth was so large that folks started calling him “Satchelmouth,” and from there it evolved into Satchmo.

Louis Armstrong was a good man and a great trumpet player. He would be an excellent role model for both aspiring musicians and kids in general. Too bad this book is not a better representation of that.