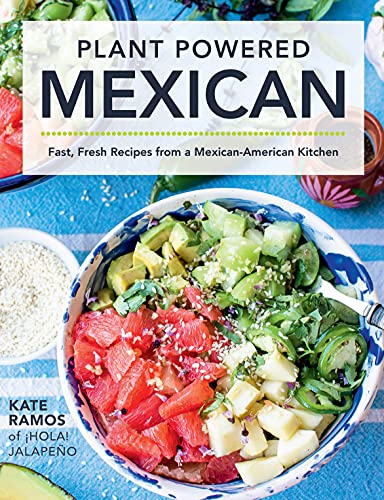 Unless you’re deeply committed to a life of vegetables, phrases like plant-based can be a turnoff when it comes to menus and cookbooks. Sure, many of us want to expand our vegetable repertoire but still need to indulge their inner carnivore—particularly when we think of a bleak future with nothing but quinoa and steamed broccoli. But Kate Ramos, who created the blog ¡Hola! Jalapeño with the goal of merging authentic ingredients and flavors with modern preparations, has our back. Taking that philosophy, Ramos has written her Plant Powered Mexican: Fast, Fresh Recipes from a Mexican-American Kitchen, a lushly photographer book with recipes that are so wonderful it’s easy to forget there’s nary an animal protein anywhere in her book.

Instead, Ramos offers us such dishes as Chileatole (a thick soup) with Masa Dumplings and Lime Crema, Potato and Collard Greens, Crispy Tacos with Ancho Chile Crema, and a personal favorite--One-Pan Cheesy Rice Chile Relleno Casserole.

In her first chapter, Ramos tells us what’s in her pantry, providing us with an entrée into the world of chiles, peppers, oils, spices, herbs, and Mexican cheeses as well as the equipment she relies upon. The latter are simple enough. Just a comal (but she notes you can use a cast iron skillet instead) and a molcajete and tejolote, a volcanic stone mortar and pestle for grinding spices and making chunky salsas. As for the ingredients she commonly uses, many of us have such items as black pepper, smoked paprika, garlic powder, kosher salt, and coriander in our spice drawer already. That just leaves a variety of dried chile powders—ancho, guajillo, arbol, and habanero as well as a few other ingredients that can be bought as needed. Unlike many entrees into a new cuisine, Ramos keeps it simple and inexpensive.

Six of the remaining chapters are divided into cooking methods—slow cookers, stovetop, grills, and oven. Instant Pot aficionados will be very happy to hear that there’s an entire chapter devoted to recipes using the beyond-popular small kitchen appliance. Ramos cooks out of a small kitchen and says she’s never been enamored of kitchen equipment until, that is, she fell in love with her Instant Pot. Besides, its ability to cook beans—a common ingredient in Mexican cookery--quickly, Ramos offers a selection of recipes she’s developed for quick dinners for busy home cooks like Black Bean Enchilada Casserole, Smoky Tomato Tortilla Soup, and her Loaded Sweet Potatoes with Lime Crema, Sofrito Beans, Roasted Kale, and Chives.

The recipes all worked without having to make tweaks to salvage them. That’s a plus because I have encountered recipes that haven’t been tested or at least not well evaluated before being included in a cookbook. If there’s one complaint about Plant Powered Mexican it’s that the font is small, so instead of just glancing at the recipe while cooking, one often has to pick up the book to be able to read the directions. It’s a small complaint and shouldn’t stop anyone who is interested in plant-based cooking from purchasing this well-written cookbook.