Places of Mind: A Life of Edward Said 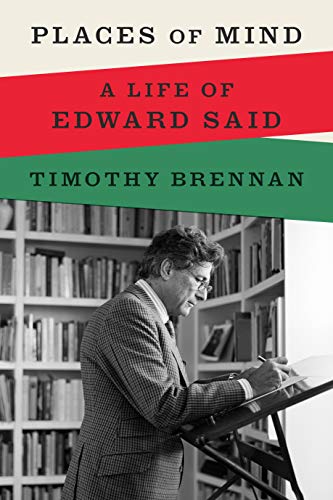 The time in which we, live, at least in the West, Brennan writes in the preface to his book, is a “’post-critical’ age (including in academia) as the establishment’s revenge on him.”

That’s assigning more power to the establishment than it deserves. True, Said could be a thorn in the side of the White House and corporate media, but American establishments had bigger foes than he. Still, he was raked over the coals when he threw a rock (or was it a pebble) across the border between Lebanon and Israel.

A symbolist, and a ironist, as well as a contrarian, Said (1935–2003) entered the American academic world near the height of literary criticism, as Brennan makes abundantly clear in a section of his biography in which he mentions nearly all the writers and teachers who dissected the culture, created the canon, and persuaded students and the common reader to adopt and adore certain books by certain authors, and not other books by other writers.

Born in Jerusalem to a prosperous Episcopalian Arab family and raised in Egypt and the US, Said attended Princeton and Harvard before he found a place for himself at Columbia College in New York, which was probably the city in which he felt most at home.

“I’m the last Jewish intellectual,” he quipped more than once, near the end of his life. “All your other Jewish intellectuals are now suburban squires.” Some of the provocative style of the New York intelligentsia rubbed off on Said, though he could also wage cultural warfare on the very same group.

Today’s graduate students and lecturers at colleges and universities who want to make it in academia and the world of publishing might read this biography and take their cues from Said’s career.

They might also learn how to offend friends and allies and how to sabotage their own careers.

For a time, Said played it safe. Then, when it no longer suited him, he didn’t. Over the course of his life, as Brennan shows, he embraced and then distanced himself from causes, colleagues, and his contemporaries in the world of literary criticism.

“I’m fed up with politics,” Said said after decades of political activity that put him in the political spotlight as a friend and ally of Yasser Afat and the Palestinan people.

They made an odd couple, indeed, the head of the Palestinian Liberation Organization (PLO) and the Columbia professor who denied his Palestinian roots and identity for a long time.

Brennan has read Said’s published and unpublished work—including his fiction and his letters. He has interviewed most of the major figures in his life, including former students, and provides useful descriptions of his style in the classroom, where he could be a kind of prima donna.

"Weak or ill-prepared in-class reports would be interrupted, at times with his head facedown on the desk, hands in his pockets, loudly playing with pocket change," Brennan writes. Perhaps the students deserved that treatment.

“I don’t believe in politicizing the classroom,” Said once said. But he inevitably did because of the authors he assigned—the Marxists, Gramsci, and Lukacs—and his interpretations of novels like Nostromo, by Joseph Conrad, the Polish born exile who became an English writer and with whom Said sometimes identified.

Brennan tries to nail Said, even as he gives ample room to his contradictions and his unwillingness to be nailed. A little more than halfway through his biography the author writes that Said was “the closest thing America had to Sartre.”

Well, yes, one can see similarities, but Said was also an intellectual unto himself: a lover of literary theory and classical music who often divided his time between Lebanon and the US and who had friends from Europe to the Middle East and beyond.

I was not a friend, but merely an acquaintance. In the 1970s, Said assigned my book, The Mythology of Imperialism to students at Columbia. According to Brennan that book “touched Said deeply.”

Said and I were both fans of Conrad, and we were both intrigued by the machinations of imperialism and colonialism, though I never wrote a book as popular and as influential as his Orientalism, which shook the foundations of academia and that opened the door to the field of study known as post-colonialism.

Places of the Mind pleases because it hues to the main contours of Said’s life and career, but also because of its many asides, including his own lexicon that included words like “contrapuntal.”

At times, Brennan abuses the word and the concept of influences on Said. It might be more accurate and perhaps a tad more elegant to say that Said positioned himself at the confluence of different and often contradictory concepts and aimed to weave them together.

Reading this lively biography might make one wonder how he managed to hold it together for as long as he did. Perhaps because of sheer will power and because he wanted to prove something to himself and to the world.

Brennan dedicates his book, “For the Palestinian people.” In that sense, and also because of his fierce attachment to and his dissection of ideas he keeps Said’s legacy alive.