The Pittsburgh Cocaine Seven: How a Ragtag Group of Fans Took the Fall for Major League Baseball 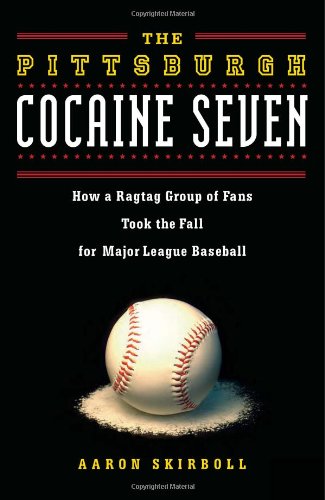 Americans viewing those old and trite film shots of people lounging around languidly in opium dens, powerless to escape from their drugged reveries, used to feel scorn for those addicts. Yet it is clear that anyone can fall prey to drug addiction.

According to the author of The Pittsburgh Cocaine Seven, during the 1980s millions of Americans got caught up in the coke craze, and that included several baseball players of the Pittsburgh Pirates who were persuaded into taking drugs regularly. The fans who sold them cocaine were not trying to make money, says the author of this book, they were just trying to be pals with their heroes so that some stardust would rub off on them.

The story in which players like Dale Berra and Rod Scurry gradually succumbed to addiction, often taking part in games while drugged, is a nasty one. It may sound surreal, but Skirboll shows that the man who began the whole mess was someone hired by the Pirates management to dress like a parrot and act funny for fans of the Pittsburgh Pirates. Kevin Koch took this job for the same reason that inspires women who follow baseball players around: just to enhance his own importance by becoming close to well-known and wealthy young baseball players. The parrot-headed fan served as the nucleus for a group of other fans who turned Pittsburgh players into addicts.

Although the drugs these players took made them feel powerful and even temporarily improved their performance (they often played under the influence), inevitably they became too strung out to handle their jobs, and their health was adversely affected.

Skirboll makes the point that law enforcement, not major league baseball, cracked the case, after Rod Scurry, a Pirates pitcher, revealed that a network of drug dealers was servicing National League players. Gradually, the FBI obtained hard evidence implicating a large group of players and their dealers in illegal drug dealing. Thus did the millionaire heroes of many American children and adults find themselves in trouble with the law.

The author doggedly gives us the full and seedy details of the purchase and use of cocaine by many athletes, even reviewing similar events the previous year that had involved a few Kansas City players.

When confronted with the evidence of their drug purchases, some players admitted that what they did was wrong and testified forthrightly; others denied their participation even when the evidence against them was clear and even after being granted immunity for their testimony. Dale Berra, son of the more famous and beloved Yogi Berra, at first refused to admit any connection with drugs, then denied having testified before the grand jury, and then claimed that he was called to testify only as a background witness. Perhaps consistent drug use makes people into prevaricators.

Some fans and writers defended the players. Excuses they gave included the explanation that players who used drugs were only acting like the rest of society at the time. As for the players’ reasons for using drugs, they later explained it as a reaction to boredom, along with peer pressure, being away from home for long periods, and even having too much money to spend. People like this used to be described as spoiled brats; now they manage to evoke sympathy from others. Perhaps what they really need is help in learning how to live.

Fans became deeply disappointed when they discovered that the young men they thought of as strong and heroic were just as vulnerable as anyone else. One FBI agent, William Craig, a lifelong fan, was deeply shocked by his discoveries about ball players’ dependence on cocaine. He felt his faith in the American national game to be severely shaken.

Commissioner Peter Ueberroth, confronted with irrefutable evidence, announced that he was going to “remove drugs and be an example,” while Donald Fehr, the players’ union head, thought voluntary testing was working well and expressed concern about comprehensive testing as a violation of player privacy. Skirboll circumspectly omits to comment on the flabbiness of both statements and leaves it to the facts and to quotations from Ueberroth and Fehr themselves to demonstrate it. The Players’ Association reportedly opposed urine-testing “almost unanimously,” although, according to Skirboll, by the 1980s drug testing was already finding acceptance in many American companies and some institutions.

I know it worked in the publishing company where I was a senior editor in the 1980s; one editorial employee found frequently to be sitting dazed in the company library was tested and fired. Didn’t the baseball club owners notice how odd many players were acting?

When the evidence of players’ drug use was presented in court, only the seven dealers were indicted and received prison sentences. Baseball writers and their attorneys softened their guilt by referring to them not as drug dealers but as “fans” or “groupies,” “pitiful sports junkies” who were “starstruck.”

The punishment for the baseball players, some of whom were shown to be drug distributors, became a slap-on-the-wrist community service sentence. Not until 1985 did Commissioner Ueberroth take action on the evidence of drug use by announcing some fines and suspensions of guilty players. Why no prison for the players? Skirboll explains that without giving the players immunity from sentencing, the FBI would not have been able to indict the dealers.

The author of The Cocaine Seven, in evaluating the whole affair, harks as far back as the Black Sox Scandal of 1919. He mentions this scandal in order to contrast the lenient player treatment of the 1980s with the severe sentences that Commissioner Landis imposed on players in the 1919 Series who were suspected of game-throwing. Landis banned them even though they had been exonerated in court.

The question of whether ball players should be tested for drugs simply floated away, because owners tried not to stir up what writer Murray Chass called “negative attention to the game.” In chastising the league owners for their inaction, Skirboll unfortunately backs his statement about the owners’ ineptness by citing the so-called cheapness of Charles Comiskey, owner of the Chicago White Sox, as described by Eliot Asinof in his book Eight Men Out. Scholars of the Society for American Baseball Research have recently shown Asinof’s charges to be baseless.

Yet the fact remains that historically, the clubowners have always been unwilling to jeopardize their profits by publicly recognizing the problems in the national game. The best example occurred back in 1919: If the owners had admitted in print just before the World Series that they already knew gamblers had approached players and that some had taken money to throw the games, they would have had to call off the Series and lose a lot of money. Their attitude has always been to keep problems swept under the rug as long as possible in order not to be hit in the pocketbook, hoping that the problems will fade away like Christy Mathewson’s favorite pitch.

Skirboll’s book on the cocaine seven—the dealers, not the players—might be compared with the 2006 book called Game of Shadows: Barry Bonds, BALCO, and the Steroids Scandal that Rocked Professional Sports by Mark Fainaru-Wada and Lance Williams. But Skirboll’s book covers what happened in the past and remained unresolved. The writers of the book on steroids, Fainaru-Wada and Williams, were actually investigators who helped break the most recent scandal by obtaining evidence, especially on the laboratory called BALCO, that created all sorts of supposedly health- and strength-building concoctions and persuaded players like Barry Bonds to use them. By the 2000s, the use of drugs in sports was so prevalent that the Congress of the United States was persuaded to hold hearings on the problem. If major-league baseball had clamped down on illegal drug use back in the 1970s or 1980s, the Congressional investigation would be unnecessary.

How clean are the players today? The answer is foggy. Commissioner Bud Selig was quoted in Sports Illustrated on September 13, 2010, as saying that the trials of Barry Bonds and Rogers Clemens as the result of the Congressional investigation “are cases between those people and the government and really have nothing to do anymore with baseball. . . . The fact of the matter is, the game has never been cleaner than it is today. Yes, we need a test for human growth hormone, but all sports are looking for that. . . . [Until 2003] this sport never had a drug-testing program, even during the cocaine era of the ‘80s, which was probably more pervasive than steroids. And I don’t hear anybody ever talk about that.”

Well, Commissioner, Aaron Skirboll is talking about that. And baseball fans hope that you are listening.