Pitching in the Promised Land: A Story of the First and Only Season in the Israel Baseball League 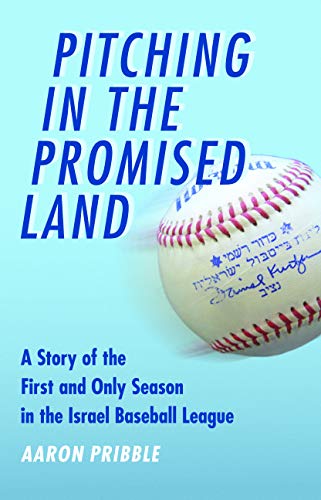 Picture a league full of pro players, several from the United States and the rest from Canada, the Dominican Republic, Colombia, New Zealand, Japan, Australia, and the Ukraine—all playing on a baseball field built by Baptist missionaries from Texas. Where are they? In Israel, of course, playing in the Israel Baseball League. One Muslim and one Maori helped complicate the ethnic-religious mix in a league of six teams that somehow melded into six groups cooperating to play and win (or lose) seven-inning games before a curious audience that almost understood what was happening on the field.

The author of this book, a half-Jewish American who had pitched in pro leagues in the States as well as France, joined the Israel League for its first and only season. A social studies teacher in Mill Valley, California, Aaron Pribble accepted the offer for the summer of 2007 because, like so many American males, he regretted having been unable to reach the top level of play and nursed “the heartfelt remorse of a dream unfulfilled.”

Facilities for play and for living in the Israeli baseball headquarters were rudimentary at best. Fields contained dangerous obstructions, sleeping quarters placed three men in a space about the size of a closet, and the boring food was just barely edible. But the disparate members of each team managed to make baseball their priority and even to enjoy themselves, nearly always keeping a wry sense of humor.

Things went wrong, of course; a player was badly hurt, the risk of terrorism was high (one player simply went home, out of fear); and the pay checks failed to arrive, inspiring a strike by the Dominicans—after all, they came to make money to send back to their families, who had nothing else to live on.

Readers will eagerly follow the adventures of Pitcher Pribble and his teammates both on and off the field. Before and during games the men learn to joke and tease in each others’ languages; in town they meet and begin to appreciate the locals; on sightseeing trips they experience excitement and nervous tension because of real danger. The author even acquires a lovely Yemenite girlfriend.

Nearly at the end of the season Mr. Pribble receives a baseball offer he can hardly resist accepting, and he waits until the last moment to decide whether to return to teaching social studies, finally making a difficult but probably wise decision.

Author Pribble concentrates, of course, on his own story, leaving in the background such questions as: Who formed this pro league and why? Who supported it financially? Were the backers Israeli? Did the Israeli government want it for propaganda purposes? Why didn’t the league last?

Not until page 28 do readers learn the name of the league’s founder. And not until Chapter 5 do we discover that the Israel Baseball League did not represent the introduction of baseball to Israel, because before this league was established, the country already had both baseball and softball—the amateur versions. So why didn’t those who formed the pro league include any members of the Israeli amateur teams? Were its players too unskilled?

The author leaves much too vague and unclear anything about the formation and backing of the league. On page 52 we discover that “numerous people” invested money in the league (who, for example?), and on page 222 we find out that one of the biggest sponsors of the league is a group called the Jewish National Fund (is that an American group? What was the reason this group gave for backing it?). We also have no idea what the league charged for admission to games—if it did. Presumably, the league lost money for its investors, although that is never stated.

We are left to assume that the idea for the pro league was just a gimmick, a curiosity, one that proved to be too much trouble and expense to continue. If so, that’s a shame. Baseball might eventually have become a tool to use in keeping the peace with the Palestinians, as the author suggests.

Mr. Pribble makes his adventure into a fascinating tale, full of both difficulties and thrills. Pitching in the Promised Land makes good reading. The author’s chapters are short and well-shaped, his writing clear and thoughtful, although not without its problems: He falls several times, for example, into the black hole left by hanging clauses. Although he sprinkles obscenities into his sentences, they usually occur in ballplayers’ speech, where one would expect them; they fail to affect the writing negatively and will not offend most readers.

The story of the Israel Baseball League represents an oddity but one worth reading simply for enjoyment, even if baseball is not one’s primary interest.
The book includes snapshots taken of league members, mostly while socializing, as well as local scenes that will mean more to the players than to readers. Longer, more explanatory captions would solve that problem.