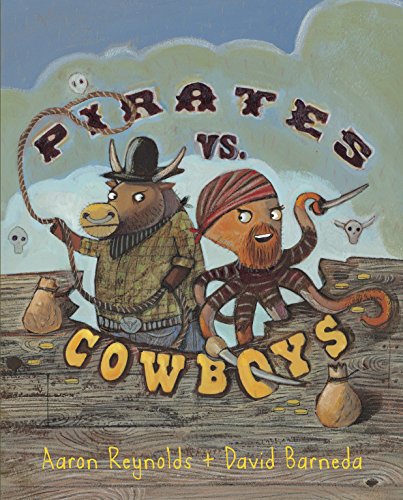 “At last, a picture book perfect for reading to reluctant bathers as well as pirates and cowboys who fight the night.”

Who woulda thunk it?

In this 40-page picture book adventure, a scurvy crew of octopi has nowhere left to store their ill-gotten loot and have to come ashore to find a new hiding place. Unfortunately, they end up in Old Cheyenne.

Old Cheyenne is simply crawling with hooved cowboys (and one eight-legged one). “And that was the start of the pirate-cowboy showdown.”

At first, Burnt Beard the octopus pirate, playing against character, tries to play nice: “Ahoy there, me hearties! Be ye knowin’ where we’d be findin’ a fair scrub and a swish?”

But Black Bob the ring-nosed bull cowboy doesn’t get what Burnt Beard is trying to say: “What’d you call us, ya yellow-bellied varmints? . . . Why don't ya mangy hornswogglers beat a trail of dust right back out of Old Cheyenne!”

To which Burnt Bob, offended—though not exactly clear why—replies: "Arrrgh, ye bilge rats! Be pointin’ us to some grub and grog or we'll be keelhaulin' the lot o' ye!”

It quickly becomes obvious that no one can understand a word uttered by the other. Not the best foundation upon which to build a close and lasting relationship.

Then, wide-legged and cool as Clint Eastwood, in saunters Pegleg Highnoon, “the world's only pirate cowboy,” legendary among both pirates and cowboys and the "only creature alive who spoke both Pirate and Cowboy.”

Thus a tale about overcoming differences as sticky as tentacles or as deeply rooted as chin hairs evolves into a minor morality tale umpired by an alligator acting as mediator (could be a crocodile, and am not an amphibophile, so don't hold me to it).

The illustrations by David Barneda perfectly capture in loose colored pencil the machismo and bluster, the annoyance and bewilderment expressed by all the creatures up and until the story’s denouement, orchestrated by the ever practical Pegleg Highnoon, who manages to find a point of similarity shared by both groups—one that ultimately unites them all.

Because the dialogue does require both seaworthy and landlubber accents plus a facility with tongue-twisting pirate and cowboy lingo, Pirates vs. Cowboys is definitely a book to be read aloud. And while the message is obvious from a mile away, the ending is one that pretty much every kid can relate to.

At last, a picture book perfect for reading to reluctant bathers as well as pirates and cowboys who fight the night.