Pirates: A New History, from Vikings to Somali Raiders 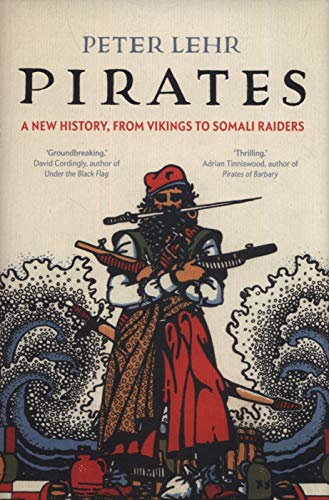 “provides an interesting juxtaposition of continuities and change . . . of maritime piracy . . .”

Piracy has been around as long as humans have gone down to the sea in ships. Heroes or villains, they have captured the imagination of generations in novels and movies. But what really motivated men (and some women) to become pirates and what was the life of a pirate really like? More importantly, after being nearly eliminated by the early 20th century, why is piracy making a comeback and what can be done to eliminate it?

These questions are all tackled in this new book by Peter Lehr, an expert in maritime terrorism and global piracy. Using a wide variety of sources to conduct a  global examination of piracy from the eighth century to today, the study provides an interesting juxtaposition of continuities and change in the motivation, tactics, and ultimately, the countermeasures of maritime piracy.

Lehr begins with the socio-economic background to piracy. Simply put, most people became pirates to escape a life of grinding poverty and hardship, looking to piracy to provide a chance for riches. The reality of a pirate’s life was, unfortunately, far different than the vision put forth by novels or movies. Pirates in the age of sail faced the constant threats of shipwreck, starvation, and disease, in addition to the danger of boarding and fighting to overwhelm a ship’s crew.

Due to the inherent risk and constant challenge of finding suitable ships at sea to board and rob, Lehr notes that many pirates also became proficient land raiders, attacking undefended ports and coastal towns to carry off plunder, considering these acts more profitable and less hazardous than attacking merchant ships at sea. The Barbary corsairs and Vikings warriors were notorious throughout Europe and the Mediterranean for centuries, with the Vikings sailing deep into Europe’s river systems to sack cities far from the ocean.

Countering pirates throughout the centuries has created numerous challenges, which Lehr examines with an eye toward the lessons for the modern era. During the heyday of piracy, effectively gaining control over a large swath of maritime territory by the great powers was enormously complicated by the sheer numbers of pirates in areas such as the Caribbean and South China Seas.

More importantly, Lehr notes how the role of privateers made the fight against piracy a muddied affair. He makes a great effort to differentiate between open criminal piracy and the more legally ambiguous role of privateers, basically private citizens given some legal cover by a head of state to prey on an enemy country’s merchant fleet in time of war. Privateers were in nearly continuous use by European countries from the 15th–18th centuries, especially England, both to capture gold and treasure to fill a monarch’s coffers, as well as enriching the privateers.

Sir Francis Drake and Sir Walter Raleigh were among the more notorious privateers as England preyed heavily on Spanish treasure ships to fund the throne of Elizabeth I. Even Article I, Section 8 of the U.S. Constitution allowed Congress to “grant letters of Marque and Reprisal” although the U.S. formally abolished the act of privateering during the Spanish-American War.

Lehr analyzes two basic ways to eliminate piracy in a given geographic area, hunting them at sea, or eradicating the shore infrastructure used by the pirates to rearm and resupply their ships and sell their stolen goods. Providing the required naval presence to completely defeat a pirate cluster often required countries to cooperate to secure a given region, a daunting political and diplomatic challenge.

However, as global Empires came to dominate the vast ungoverned waters and territories that provided shelter and supplies piracy declined, but did not entirely go away throughout the 19th century until the late 20th century.

However, conditions in many parts of the world are again conducive to the new high-tech version of 21st century piracy—ungoverned areas with high poverty and a ready supply of sailors. The waters off Somalia, the Gulf of Guinea, and portions of the Indonesian archipelago have proven to be hazardous places for not only merchants ships, but offshore oil platforms and other types of maritime commerce.

Combined with the lack of robust legal or political infrastructure in local countries to conduct trials, and the legal and political challenges of tackling this new global resurgence has become very challenging. Mixed in with religious or ethnic grievances and the influence of local terrorist groups and these new pirates are proving difficult to suppress and will likely pose a threat to global commerce for the foreseeable future.