Pirates of Barbary: Corsairs, Conquests and Captivity in the Seventeenth-Century Mediterranean 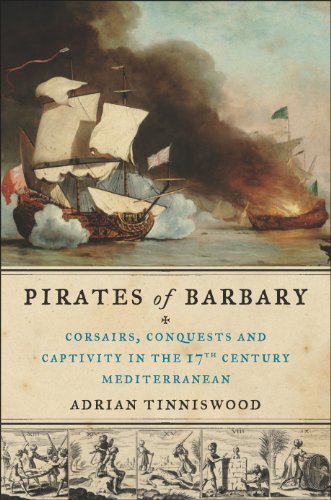 Here's the situation: Small groups of poor Muslims from a fractured and ill-governed country sail into international waters to attack ships flying under many flags, staffed by dozens of nationalities, and sailing primarily out of Christian countries. This could describe Somali pirate activity in the Gulf of Aden—or any attack found in author Adrian Tinniswood's latest book, a scholarly yet swashbuckling look at the 17th century pirates of the Barbary Coast.

The timing of this book is as lucky as the parallels are uncanny. If history can teach us lessons, then Adrian Tinniswood's in-depth study should be required reading. Working chronologically, the author focuses his efforts on the major pirate nests out of North Africa—Tripoli, Tunis, and Algiers—satellites of the Ottoman Empire, but governed by their own powerful “deys.”

First working with simple oar-powered galleys, the pirates ventured into the Mediterranean for swift attacks, but the heavy slave payload precluded voyages too far from the safety of the coastlines. Only when they upped their game—learning from European renegades how to work a sailing ship—did these pirates begin to hurt shipping so badly that they nearly stopped all trade with the Levant.

The ravages went on for decades, and, predictably, the world scrambled to find a way to stop the sinister “barbarians.” The author is quick to heap scorn on the well-documented bigotry of the Christian West in regards to the Muslim pirates, but skirts any thundering moral judgment on the other side. “Deplore the crimes, by all means,” says the author, “but remember the courage.” The Barbary pirates, he argues, perceived their raids as a defense against Christian encroachment, as well as an economic necessity for the North African cities with little other income.

Tinniswood thrills with tales of high-seas battles and voyeuristic glimpses of life in exotic North African cities, but lurking behind all this is the twenty thousand dollar question: What finally brought an end to large-scale Barbary piracy? The European powers tried several tactics. They rattled sabers, sent multinational military fleets to bomb the port cities, or blockade them. They tried negotiation, to some effect, basing treaties on annual tributes and bribes, which put many poorer European nations at a distinct disadvantage

But not until the early nineteenth century did the tradition of the North African pirates finally sputter to a stop, as the Barbary states’ ability to play one European nation off another weakened, professional navies grew more effective, and the British abolished the slave trade. The final nail in the coffin involved an Algerian dey who'd lost his temper and struck the French consul with a fly-whisk at a public feast. This incident sparked the French invasion of Algiers. Later the French took Tunis, and the Italians Tripoli.

In a word, how did the European powers end Barbary piracy? Colonization.

Sends a little shudder down your spine, doesn’t it?