The Pigeon Tunnel: Stories from My Life 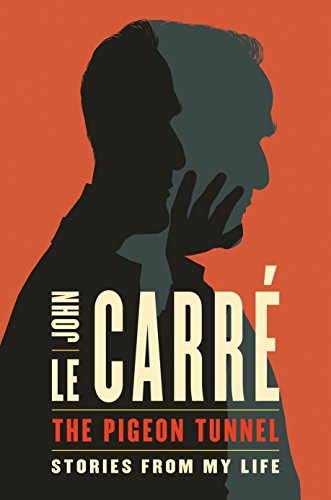 All good writers who treasure their craft adhere to some technique guidelines that will help them produce their best writing. One of the first techniques they learn is observation. To create enduring characters—good, bad, or indifferent—writers observe those around them, close family and friends, distant acquaintances, total strangers, and adapt them to their own characters. They observe the settings they experience—the place, the weather, the era, the time of day—all pieces of the writing puzzle that will endear the reader to their story.

John le Carré in his new book The Pigeon Tunnel: Stories from My Life has hit the nail on the head for observation. This book is a series of anecdotal essays, not in any particular chronological order, that show how he observed the people around him and the state of being, and how he incorporated these people and settings into his books.

Le Carré, like some writers before and after him, spent time in the murky world of espionage, and wrote often and successfully about events and people he encountered. His writings often did not sit well with those he worked for, and he gave the world more than a simple peek into that realm.

His characters emerge from those who traveled, for whatever short or long period of time, through life with him. In the chapter “Dr. Globke’s Laws” he discusses Germany in the aftermath of World War II. In researching information for A Small Town in Germany, he met with Erwin Schüle who, in 1960, was the Director of Baden-Württemberg’s Centre for the Investigation of National Socialist Crimes. He was later charged by the Soviet government to have been a Nazi Party member and a string of additional charges followed. Although the charges were proved baseless, the lesson le Carré from this meeting was “The harder you looked for absolutes, the less likely you were to find them.”

Spies from the Nazi SD, Britain’s MI6, East Germany’s Stasi, and the Soviet KGB appear as ripe for observing the nature of espionage and a wide field for character development. “Nobody can do corporate rot more discreetly than the spies. Nobody does better mission creep.” Corporate rot and mission creep—two characteristics that are a necessity for today’s spy novel.

In “The innocence of Murat Kurnaz” le Carré talks about this Turkish-German born man arrested, tortured, and held for five years in Guantanamo before his interrogators determined he was, in fact, innocent. Upon interviewing Kurnaz, le Carré learned about how detainees communicated while incarcerated, and this information became part of A Most Wanted Man. He admits that a character in the story “bears a strong resemblance to Murat Kurnaz.”

Throughout his many wanderings, crisscrossing the world to such places as Cambodia, Vietnam, Russia, Central America, Kenya, and more, le Carré sought out characters such as these, characters who were guaranteed to bring color to his stories.

For the most part, le Carré’s stories are short and to the point and his focus is on the people he met through his wanderings and how they affected his writing. In Chapter 17, “The Soviet Knight Is Dying Inside His Armour” le Carré skillfully shows the importance of why place, that is, setting, is vital to a rich story:

“In the same week I pay a visit to my Moscow publisher. It is eleven in the morning. His cramped attic office is littered with dusty Dickensian files, stacks of mysterious cardboard boxes and yellowing typescripts bound in harvest twine.”

A vivid description that places the reader in the heart of the setting.

Le Carré visited Russia only twice, and both experiences were eye opening. He reminisces about “the encounters crammed into those two short weeks in the Russia of 1987, I am moved again by the pity of it, by the striving and endurance of so-called ordinary people who weren’t ordinary at all . . .” In many instances it is the ordinary people who become the most colorful.

His second visit occurred in 1993, after Gorbachev, and during Yeltsin. “the purpose of our journey was clear to me . . . I wanted to get a taste of the new order.” What does he find? The vory (thieves brotherhood [Mafia]), glitz, extortion of the new Russia. His questions of a vory serve one purpose—he is searching the “contemporary Russian criminal soul, because I have a character in my head who needs to know.” Again, observation.

Each of le Carré’s stories is engaging in its own way, and each casts more light on how he designs and develops his characters. His engagements with these many characters that he writes about range from celebrities such as Rupert Murdoch to little known individuals whom he met on the street. Yet each person struck a chord with le Carré, a chord that was certain to show up in one of his novels. Again, it was the most ordinary people who become the most colorful.

While most of his chapters are about the characters who have rumbled through his life and in some way or an other may have ended up in his novels, there are several chapters where he recollects people who have not ended up as characters, yet have influenced his life. In particular, Reginald Bosanquet whom he describes as an “impish, hard-living, hard-drinking television newsreader . . .” who through personal generosity assisted le Carré while at Oxford, but who also did not mix generosity with friendship.

Le Carré cautions readers about fame and its sure-to-follow obscurity when he speaks of an evening with Stephen Spender. Spender, an “essayist, dramatist, novelist, disillusioned communist, knight of the realm, and former Poet Laureate of America . . .” told a story of stopping at a gas station in the middle of a Nevada desert, and when he offered his credit card for payment, the owner looked at it and said “’Only Stephen Spender I ever heard of is a poet . . . And he’s dead. So much for moving from fame to obscurity.

One of most insightful, and also the shortest chapter is “Advice to an Aspiring Novelist.” Here le Carré quotes Graham Greene, “‘Before I finish writing for the day I make sure I’ve left something under my belt for tomorrow. Sleep works wonders.’”

John Le Carré puts soul into every chapter. Once started, the book is difficult to put down, as each story is intriguing in its own right. This is a must read for writers and readers alike. Put it on your shelf—but only after you have dog-eared it through several readings.