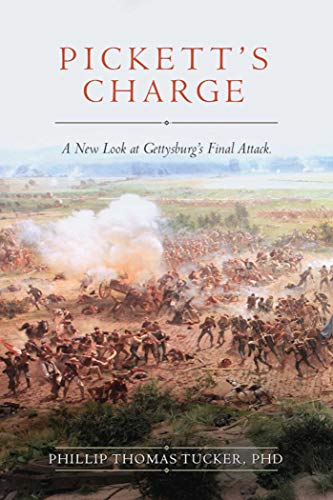 “a workman-like job of revising many of the myths and misconceptions about the battle . . .”

As the author notes in his introduction, Pickett’s Charge, the capstone event of the epic Battle of Gettysburg, has long been shrouded in legend and myth as the brave but futile and bloody “High Water Mark of the Confederacy.”

Long considered by many military historians as an inept last ditch effort by the Army of Northern Virginia to secure a victory over their well dug-in opponents, the attack has become almost synonymous with the futility of infantry attacks against well defended positions.

This effort is partly successful, but falls somewhat short in several key areas where the author raises questions or makes assertions that are not followed up in a convincing fashion.

The first issue the author raises is the planning of the attack itself. A fairly convincing case is made that this was not some emotional last-ditch effort by Lee to try and secure a victory, but a classic Napoleonic tactic dictated by the conditions on the battlefield after two days of heavy fighting.

The author makes a good case that after assaulting both flanks of the Union Army unsuccessfully, the resulting shifting of forces to cover those flanks and defend against further assaults had left the Union center anchored on Cemetery Ridge weakened and vulnerable.

A strong offensive, well supported by artillery and cavalry, could have penetrated the Union center and unhinged their entire defensive line. The Confederates, had in fact, broken portions of the Union line during the second day’s fighting, but the lack of reinforcements and the onset of dusk had prevented follow-up attacks to exploit their success.

So Lee, had, in fact, followed the tactical doctrine of the day in planning the attack and had developed a fairly comprehensive plan for the attack. The author, like many recent scholars of the battle has taken a very revisionist assessment of the role of Stuart’s cavalry in this attack, asserting that Lee planned on using Stuart’s forces to ride around the Union right flank and assault the center from the rear, providing the final punch to break the Union line. This is not as controversial as it seems, as it offers the only really logical explanation of Stuart’s actions and the subsequent cavalry actions on the third day of battle.

A map or series of maps that clearly outlines the author’s analysis of Lee’s overall plan and the complete disposition of the armies prior to the assault on the third day would have been very helpful here to understand not only Lee’s thinking and tactical plan, but how the attack develops. The maps provided were very tactically focused on a portion of the battle and did not offer a comprehensive view of all of the attack.

The second issue the author raises is the actual execution of the attack and how Lee’s tactical vision fell apart under the “friction of war” as Clausewitz described it. As the author notes, the need to coordinate disparate divisions from multiple corps with artillery and cavalry was simply beyond the command and control ability of the Army of Northern Virginia’s leadership.  From Lee down to his Corps commanders, James Longstreet and A. P. Hill, the toxic combination of personality clashes, poor health, and a lack of enthusiasm for the assault almost ensured a breakdown in the chain of command when it was needed most.

The assault was also doomed from the start from poor coordination of the artillery assigned to support the assault.  Confederate gunners expended too much ammunition before the infantry began to march and did not provide the flying batteries Lee expected would accompany the infantry and provide support.

Although the Confederates had a local advantage in numbers and plenty of bravery, their inability to coordinate not only the first wave of troops, but the subsequent forces that were to exploit the anticipated breakthrough, combined with the brilliant conduct of the Union artillery under General Henry J. Hunt, an unsung hero of the battle, provided the margin of difference in the assault.

The final issue the author hints at but never seems to develop is the role of Stuart’s cavalry. In his analysis, this force was a key part of Lee’s plan, but gets very little discussion in the remainder of the book. This seems like a big gap as there was some hard fighting in the East and South Cavalry Fields on July 3.  If the author was trying to write a more comprehensive view of Picket’s Charge, a discussion of these actions and the subsequent inability of Stuart to support the attack would have furthered his thesis.

Overall, the author does a workman like job of revising many of the myths and misconceptions about the battle. His overall conclusion that if Pickett’s Charge had been carried out according to Lee’s overall plan the Confederacy would have shortly been in Washington dictating peace terms seems a little optimistic. The only army more exhausted from a defeat in a Civil War battle was the army that was victorious.

By the author’s own admission, the lack of artillery ammunition, high casualties, and a long and tenuous supply line would have likely left Lee in possession of the battlefield, but it is more probable that even if the Union Army had been split and mauled, there was still the troops of the VI Corps in reserve, plus the defenses of Washington were more than sufficient to hold off Lee’s troops. A moral victory might have been gained, but ultimately, the surrender of Confederate forces in Vicksburg would have more than outweighed a Confederate victory on Cemetery Ridge.