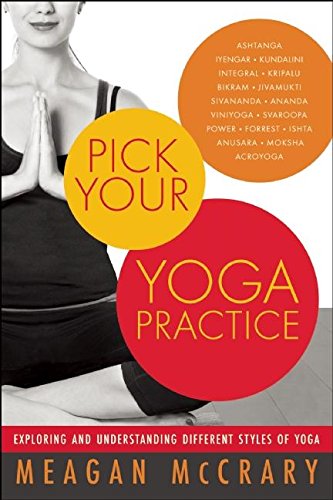 In Pick Your Yoga Practice author Meagan McCrary explores several “styles” of yoga. Some are directly connected to Indian gurus, while others were started by American teachers who parted from their gurus’ lineages; some have even been developed very recently.

Ms. McCrary describes yoga as a physical, mental, and spiritual discipline. Although it’s not a religion, yoga is an ancient belief system. It’s also “a science of exploration, a process of self-discovery, a method of personal development and spiritual evolution, and an art of transformation.”

After presenting America’s yoga history and a concise timeline of yoga in America, Pick Your Yoga Practice continues with discussion of seven core styles of yoga, plus ten systems described as the “best of the rest.”

Each chapter contains background information about the creation, founding, evolution and traditions of each system, followed by a general overview of what to expect in class. The main aspects and concepts of each method provide a clear and complete picture of each style.

Ms. McCrary describes yoga as a methodology for personal and spiritual development, composed of different philosophical systems that prescribe a certain way of living and interacting with the world at large, with its own decree of morals, scriptures, physical postures, cleansing practices, breathing techniques and meditation methods.

The worldview of a particular style of yoga will influence the nature of class, the teacher’s approach, how instructions are communicated, and what qualities of heart and mind are emphasized.

Sanskrit terms are explained in the text, and no glossary is provided. Endnotes are included for nearly every chapter in Pick Your Yoga Practice. A resource section provides at least one URL for each type of yoga discussed in the book.

Yoga practice is a metaphor for life. How individuals respond to challenges on the mat, how they handle disappointment or change, and how they observe themselves during yoga practice, are all reflected in their experience off the mat, too.

Pick Your Yoga Practice is recommended for individuals who wish to start a yoga practice, whether they seek greater physical health, mental clarity, emotional balance or spiritual attainment. The book is well researched, giving the reader an insider’s view and understanding of the similarities and distinctions among the selected styles of yoga. It’s also a valuable guide for experienced yogis who wish to enhance their practice or experiment with another approach.