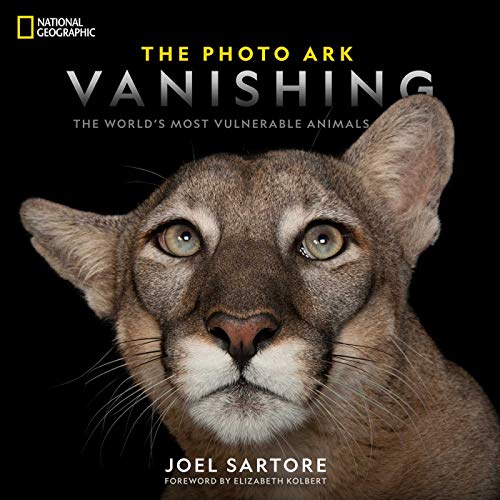 Joel Sartore is a National Geographic photographer working around the world with a team of researchers and animal conservationist to save literally thousands of species from extinction. His latest book, Vanishing, is another in the National Geographic series The Photo Ark whose mission is to documents global animal genocide. Vanishing has over 300 portraits of endangered animals photographed by Sartore, who states “All Animals, regardless of size or shape, are glorious. Each is a Living work of art.” In the text, in fact, the subjects are referred to as “individuals.”

Pulitzer Prize-winning author Elizabeth Kolbert (The Sixth Extinction) writes in her foreword to Vanishing, “Precisely because extinction takes place so frequently now, it’s possible to become inured to it. And it is this desensitizing that makes Sartore’s work so crucial. Through his images, we see just how remarkable each species is that’s being lost.”

As beautiful as these portraits are, Vanishing is an indelibly depressing expose of what could be the last members of species barely surviving in their natural habitats. The book reveals the massive scope of the global crisis—the statistics of imperiled species are detailed by eight distinct categories from EW (extinct in the wild) to CR (critically endangered) to DD (data deficient).

Sartore’s introductions to each chapter lay out the basic facts, a sobering countdown of the direct threats to a particular animal; and then page by heartbreaking page, the portraits speak for themselves as we contemplate the dignity and peril of each animal. Sartore’s close ups of these animals reveal their singular identity as vital inhabitants of the earth from tiny insects to majestic elephants. Sartore photographs the creatures in a “studio” environment: a blank black or white backdrop peeking through a portal; the only object that is visible to the animal is the camera lens.

National Geographic’s team of ecological scientists, photojournalists, writers, and conservationists are on a quest to document the realities of disappeared species of the world caused by human domination of the planet. The overarching plea is for humans to realize that the loss of a species impacts the entire ecosystem and will eventually impact all life on earth. Showing disruption of their environment by human activity, along with contemplating the destruction of a species, The Photo Ark series challenges us to consider our part in this global crisis.

The book details the causes of the vanishing species: from industrial disregard for natural habitats to the willful human cruelty of big game hunting. Top on that list are the accelerating threats of climate change with indisputable reality of such things as acidification of the oceans, melting ice-caps, and wanton environmental pollution.

Vanishing brings all of these issues in the clearest and profoundly disturbing focus. There is no justification for the murder of these species and the reality of what it will eventually mean to humans, who may or may not live to regret their inaction to save the other inhabitants of the natural world.