Phoenix Rising: From the Ashes of Desert One to the Rebirth of U.S. Special Operations 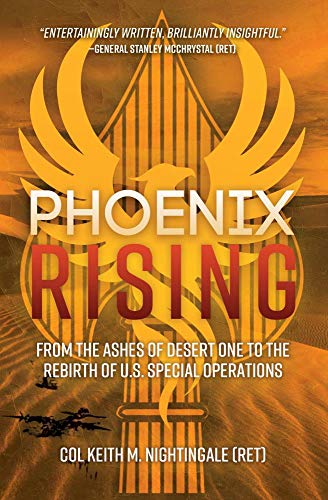 “will come as a shock to readers used to hearing about meticulously planned and executed American special operations . . .”

The debacle of the Iranian hostage rescue mission in 1980 in many ways represented the nadir of American military capability in the post-Vietnam era. The images of burnt-out aircraft sealed the fate of the Carter Administration and eventually led to significant reforms of the American military establishment.

This truly astonishing book by an Army officer involved in the planning and conduct of the operation will come as a shock to readers used to hearing about meticulously planned and executed American special operations like the bin Laden and al Baghdadi raids. This is not a traditional memoir, but a running journal of the author’s observations and opinion of myriad actions and decisions needed to improvise what became Operation Eagle Claw.

Working in great secrecy and without a budget, an anathema in the Pentagon, the group came up with a highly complicated plan with little margin for error. Colonel Nightingale provides his very terse opinion on leadership throughout the government, noting the general lack of enthusiasm for the rescue effort by the State Department, CIA, and even the military services.

The operations planning team had numerous challenges to overcome, both large and small, and their ability to get all of them accomplished in less than six months, often against seemingly impossible odds, is truly astonishing. The mishmash of different military units, all of which had to train in great secrecy to avoid detection by Soviet satellites and other espionage capabilities, significantly increased the burden on the operational planners. In addition, the lack of intelligence about crucial questions such as the location of the hostages in the embassy compound and the number of guards on duty also complicated the mission planning and increased the number of operators required to provide some margin of success.

In spite of the bureaucratic and operational challenges, the mission proceeds, only to be cut short when three out of the eight allocated helicopters suffer mechanical difficulties, leaving the mission with too few to continue. After the mission is aborted, a collision occurs between one of the helicopters and a refueling plane, killing eight Americans and ending any realistic chances of rescuing the hostages.

The author then spends the last third of the book describing the fallout from the raid, including the numerous 1980s legislative overhauls of the Defense Department such as the Goldwater-Nichols Act and the Nunn-Cohen Amendment that led to the eventual creation of the Special Operations Command with its subordinate Joint Special Operations Command that would eventually carry out some of the most successful missions of the War on Terror.

Some readers may find this section a bit tedious and jargon-filled, but it is historically significant to understand how a very entrenched and resistant military bureaucracy was finally forced to accept the utility of small, elite military forces able to conduct operations where large conventional forces would be unsuited.

As the author states, without the catastrophe at Desert One, there likely would not have been an impetuous to create the dedicated special mission capabilities the U.S. now has at its disposal. The sacrifice of those eight servicemen truly was not in vain.