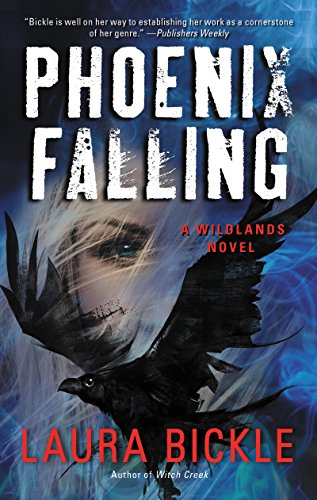 “If this should happen to be the last novel in the series, the story couldn’t end in a better way.”

Petra Dee is happy to be cured of cancer but the alchemically created body she now inhabits is taking a little adjusting to, as is the fact that husband Gabe is once again immortal and must spend his nights sleeping under the Lunaria, the Tree of Life, where he decomposes and is reborn again each morning.

“Her consciousness had been moved from her failing old body to a new vessel. She knew she should be grateful to be alive and healthy but was terrified of what this transition meant.”

Her unhappiness and Gabe’s must be set aside, however, when a ball of fire falling from the sky sets Yellowstone afire.  Petra thinks it’s a meteorite but Gabe isn’t so sure.

“My gut says some kind of elemental is at the root of this. Something with wings. A phoenix, the sign of transition from physical to spiritual, the ultimate purification.”

The same firebird once before devastated the area in the long ago past. Nine, their wolf-turned-human friend, remembers the phoenix’s’ last visit, as well as its fight with the black Toad God and the shaman woman who sacrificed herself in order to protect her people. This time, however, there’s no one strong enough to fight the phoenix or protect the Tree of Life from the blaze.

Sheriff Owen Rutherford has his own problems. Still haunted by the ghost of little Annie, all he wants for the child is closure, to find her killer and send her spirit into the light. When he discovers the Black Toad god really exists, he’s offered the chance, but he isn’t certain he has the courage, or the cowardice, to do what’s asked of him.

“I trust you,” Annie said. “I’m happier now than I was when I was with my parents.”

It was the only time anyone had said that to Owen and was like a punch to the gut, that a little girl would rather be with a jerk like him than with her own parents. He knew he was not a good man, but perhaps he could do one good thing.”

Adding to the disaster of a national park in an uncontrollable conflagration and a crooked sheriff’s chance at redemption, Lascaris, the alchemist who built the town of Temperance, has found a way back into this dimension. His re-emergence will cost Petra and Gabe a great deal of heartache, and the town of Temperance will be faced with total destruction if the phoenix, Lascaris, and the Black Toad god confront each other.

Some readers may wish there was more explanation as far as the background of this novel but if its forerunners haven’t been read, it’s best simply to go with the flow and infer as much as possible from the few expositions given. There’s enough action enabling the reader to lose himself in the plot whether or not he knows what came before.

Author Bickle creates great characters and she goes into enough depth with each that even the minor ones get their due. Spotlighted in this story are Nine, the wolf who has become a woman, and corrupt Sheriff Owen Rutherford, owner of the ranch where the Tree of Life has taken root, the man who in the previous novel held Gabe captive.

In this story, redemption is available to any and all and everyone receives his just deserts, though in some cases it’s bought at a terrible price. Nine has a choice to make and no matter which way she chooses, she will lose something she loves as well as gain something she dearly wishes.

Owen brings about his own accidental salvation as he struggles to give Annie justice. There’s a moment of pathos, touching in its simplicity, as he buys games and animated DVDs for the ghost-child to watch. The man who declares he has no paternal instincts find himself developing an affection for the child-spirit, and his determination to find her killer brings about his own deliverance.

The ending should satisfy everyone. If this should happen to be the last novel in the series, the story couldn’t end in a better way.