The Personal MBA: Master the Art of Business 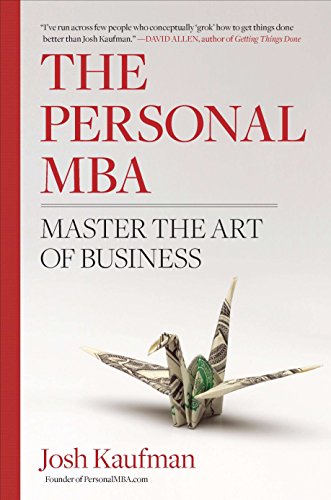 Full disclosure: This book intentionally debunks the value of an MBA degree. While I do not have such a degree, both my sons have MBAs from Stanford University (paid for by themselves). In fact, among my parents’ 10 grandchildren, to my knowledge at least five now hold MBAs. Their subsequent career acceleration gives me an anecdotal basis to believe the degree has value. More to the point, this book advocates “business self-education,” but for me, the following advice from the I Ching carries far more resonance: “There is something ponderous and one-sided about the self-educated.”

After reading my self-disclosure, above, it seems to me there’s no way I can like this book. But actually I do. Just not its stated purpose.

Josh Kaufman wanted to go to business graduate school, but was lucky enough to get what he calls an undergraduate MBA, and then an MBA-level job with Proctor & Gamble, a Fortune 50 company. Serious about his business self-education, Kaufman continued to read widely while working, eventually blogging about what he was reading on the Internet. After a while, and after a steady drumbeat of self-promotion, his postings gathered widespread attention, and he wound up with a lot of followers, which led to his writing this book.

In The Personal MBA, Kaufman asserts that most people are hamstrung by a feeling they don’t know enough (about business, is his point, but it’s equally true about almost any discipline). They get a formal education, he says, to overcome their “Certification Intimidation: The idea that . . . if you don’t have . . . expensive credentials, who are you to say you know what to do?”

According to Kaufman, he wrote this book to give people more confidence. “You don’t need to know everything,” he cheerleads. “You only need to understand a few critically important concepts that provide most of the value. Once you have a solid scaffold of core principles to work from,” he assures the reader, “building upon your knowledge and making progress becomes much easier.”

In this case, the “core principles” and “critically important concepts” include what Kaufman calls “226 simple ideas” that, taken together, are extremely valuable if you want to start and/or manage a successful business of any size.

The 226 simple concepts that Kaufman lays out in these pages—which center around understanding the fundamentals of how businesses work, how people work, and how systems work—are good ones. I can’t promise, however, there isn’t a 227th or a even a 228th that might be equally or even more important. Nor can I swear that all 226 are “first principles” that deserve your primary attention. In fact, I’m almost certain that some of these simple concepts don’t apply to the particular business you’d like to start or the current management situation you’d like to master.

Which brings us to my problem with this book: Kaufman cites prominent research to show that an MBA brings no added income or accomplishment to those who acquire it, and he explicitly urges people not to get an MBA. Instead, he encourages self-education using this book among others.

But this glosses over a significant drawback to the process of self-education: Without a teacher, it takes quite a long time not just to glean and learn (in this case, Kaufman has done the gleaning, so all you have to do is the learning, but it’s still a lengthy process) all the simple concepts that apply to your chosen discipline. Without a teacher’s guidance, feedback, and accumulated wisdom, it takes even longer to figure out which exact concepts to apply in which situations. Many people can eventually learn this through trial and error, but in most cases those errors can cost you. For most of us, it’s faster and more effective to learn at the feet of those who already know.

It’s like this story about racecar driving. It seems a young driver was following an older driver through a complex series of curves on a difficult racecourse, and lap after lap no matter what combination of gears he tried using through the various curves, he just couldn’t keep up. Later, the young driver asked for advice, and the older driver said, simply: “Take the whole series in third gear.” It worked.

This illustrates a basic aspect of all learning: namely that a savvy long-term practitioner not only learns the intricacies of the body of knowledge in question, but often masters them well enough to simplify his application of that knowledge, frequently obtaining better results. Think of the doctor who can diagnose a rare illness while the recent medical school graduate is still waiting for preliminary test results, or, more to the point: the well-rounded business leader who can avoid the many pitfalls in a new venture that routinely trap the first-time entrepreneur.

That’s a long and roundabout way of assessing this book as follows: Yes, it’s important for people not to be intimidated by certifications and degrees (particularly the ones they don’t have), and yes, Josh Kaufman has put together a large compendium of important ideas and guidelines that anybody who wants to earn money in business would be well-advised to know.

But no, it’s not enough to familiarize yourself with or even memorize these 226 simple business concepts. They’re important, but not sufficient.

Even Josh Kaufman knows this, although he doesn’t acknowledge it in the pages of this book. After receiving a high-quality business education, he worked in a demanding position within a large organization and learned first-hand from the ways in which others successfully identified problems, assessed opportunities, made decisions, and took action to get desired results. Kaufman learned about business both in school and in practice; not by reading a single book.

There are three more important points: First, Kaufman argues that an MBA is always a waste of time and money. In making this argument, he ignores one of the most valuable aspects of an MBA degree: the network of individuals to which it grants access. No degree, no network. Even if the degree is worthless, for some, the MBA network alone may provide enough value to justify the cost. Kaufman doesn’t address this point.

Second, Kaufman relies on a single statistical study that purports to prove that earning an MBA has zero correlation with subsequent success. That may be true. Or it may be as false as all the statistical studies that prove there are no “hot hands” or streaks of high performance in sports —an assertion that anyone who has played or watched sports (including my Ph.D. statistician friend) knows to be completely naïve and wrong.

Here I agree with Woody Allen, who once wrote (I’m paraphrasing): “It’s amazing how some people can be absolutely brilliant and still have no idea what’s going on.”

Lastly, Kaufman points not only to his own success, but also to the success of numerous others, as proof that an MBA is unnecessary to accomplish important goals or accumulate wealth. Such arguments are spurious because they gloss over the obvious truth that certain people are more capable than others. Individuals succeeding without an MBA simply don’t prove that everyone else can do the same, any more than Madonna’s success proves that everyone can become a star. Such individual achievements prove only that there are exceptional people who can overcome enormous obstacles and achieve their goals.

The plain fact that so many non-degreed people have not achieved extraordinary results is pretty strong evidence that, for most of us, an MBA can be a big help.

Come to think of it, you might want to put that down as simple concept # 227.