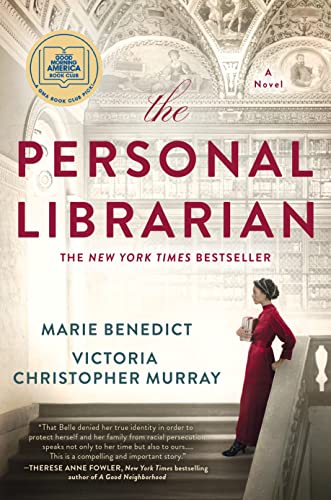 “The Personal Librarian is a good, well-paced creative nonfiction book about a real person that will snag the reader and hold his or her attention from beginning to end.”

The Personal Librarian by Marie Benedict and Victoria Christopher Murray is a perfect example of creative nonfiction. It benefits the reader from both types of reading—it is educational, and it is entertaining.

Benedict and Murray picked their subject, Belle da Costa Greene (aka Belle Marion Greener), with care. A true to life person, Belle, chosen to work with John Pierpont Morgan establishing his library, is a fair-skinned Black woman who spends her life passing as a white woman.

And this thread carries through the entirety of the story. Belle’s mother—also fair skinned, as are her other children—encourages Belle to continue the deception. She knows this is the only way her daughter will succeed in life.

It’s a heavy weight that Belle carries, never sure if her secret will be exposed. There are points in the book where she steps to the edge, almost exposing herself, but catches herself before she steps over.

The story is told in the first person, which puts the reader into Belle’s mind—sharing her thoughts, experiencing her life’s events. There are moments when Belle’s attitude borders on conceit for the successes she has, and yet living in her mind and knowing her secret, this attitude is perfectly acceptable.

Each chapter is written as a journal, with dates and places, and in the present tense, taking the reader through the story as it happens. It begins as Belle applies for the position of personal librarian to J. P. Morgan and is hired above other applicants. From here, Belle’s respectability grows as does her need to keep her secret. Throughout the story Belle is received by the wealthy set as part of the group because of her position with Morgan.

The authors bring in plenty of tension and conflict.

Belle establishes a quasi-comfortable relationship with Morgan and to some extent, his family. Here Benedict and Murray bring in the antagonist—Anne Morgan. One of J. P.’s daughters who does not like Belle at all, leaving Belle to worry about her secret and if she will be exposed by Anne. But Anne has her own secrets. The antagonist role is not a strong one, and yet wanders through the story to tantalize.

Another crucial situation filled with tension and conflict is her position as an unmarried and unspoken for female in the world of men, and here the authors bring in a relationship with Bernard Berenson, an expert on Italian Renaissance art.

Berenson is older than Belle by about two decades, and he is married, but he and his wife, Mary, consider theirs an open marriage, with each having relationships outside of their union. Bernard is taken with Belle, and she with him. An unfortunate situation occurs resulting in a separation, and there are several years before they reconnect. It is at this time that Belle discovers Bernard’s dirty little secret.

Benedict and Murray do an admirable job of also bringing tension and conflict into Belle’s personal home life in which her father has abandoned the family because he is an equal rights activist and disagrees with Belle’s mother’s attitude about passing for white. It is years before Belle reconnects with her father and the relationship, although tenuous, is rebuilt.

And so, Belle’s personal secret drives tension through the story with each moment that she might face exposure and her understanding that she has no other options.

While Benedict and Murray take some liberties with historical dates and places, they use that to improve the literary flow of the story, and it works.

There is a lot of name-dropping throughout the story; names of wealthy families and influential persons in the literary and artistic world that may or may not be known to the reader. At times this is distracting and appears only to add pages to the story. Nnetheless, it does raise the reader’s curiosity about these infamous persons.

From an educational standpoint, Benedict and Murray share names of priceless manuscripts, books, paintings, authors, and much more, placing the reader in a position to research these items to satisfy curiosity.

The Personal Librarian is a good, well-paced creative nonfiction book about a real person that will snag the reader and hold his or her attention from beginning to end.