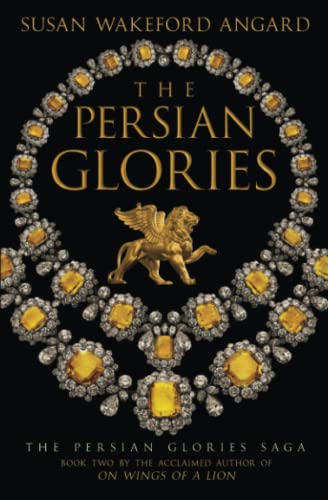 Never has an evil woman been portrayed so deliciously as in Susan Angard’s The Persian Glories. Rena Adjani, seeing Carl Fabergé’s gorgeous jewels, the Persian Glories, on display in 1942 vows that one day she will have them for herself. This despite the fact that her deceased sister has already passed them on to her own son, playboy and adventurer Anthony Evans.

Evans has gifted the Persian Glories to his betrothed, Kathryn Whitney, a documentarian and adventurer in her own right. She has just managed to escape Iran’s Revolutionary Guard with her film crew and grabs the Glories on her way out of the country. She and Anthony agree to meet in England in two weeks, after she has delivered the Persian Glories to his grandfather, Lord Charles Evans.

In Iran, Anthony and Kathryn had also engaged in many risky missions saving many death-listed Iranian families from brutal Black Glove terrorists. When Anthony realizes Kathryn has taken the Glories but forgotten their provenance papers for the Iranian national treasures, which could alert a crisis at customs, he makes a call to the airport director. Mirdad Adjani, Rena’s son, intercepts the call; Anthony overhears him give orders to slay Anthony’s household. Mirdad, once close to Anthony, has always envied Anthony the privileged life he held, while he, Mirdad, and his mother were left behind when her husband, Iran’s Prime Minister Valik Ajani, lost his position. Now sworn enemies with his cousin Anthony, Mirdad vows to avenge his mother and retrieve the Persian Glories as she has always wanted.

Anthony makes two calls to London, then speeds to his Shiraz, Iran, home. There he finds a massacre. He witnesses the murder of his old retainer, Raymond. Carrying Raymond’s body to his car, Anthony takes off. But the Black Glove spot him and give chase. Anthony is shot. His last thought is of Kathryn.

When Kathryn arrives in England she is detained by customs and put in a holding cell until Anthony’s grandfather arrives to clear up the mishap. He informs Kathryn that she owns the Persian Glories. She goes to the Hotel Savoy to find flowers and a note from Anthony awaiting her. He must be alive! He’s safe!

Right on time, she arrives at the British Museum where she plans to finish the shots for her documentary. But as she went over budget, an expensive Jet Ranger helicopter was destroyed, and her ex-husband has it out for her, she is kicked off the set. Her career is in shambles. As the museum doors shut firmly behind her, Kathryn meets Phillippe, Anthony’s best friend, who is waiting at the curb with a limo. He tells her Anthony is dead. Kathryn is devastated. She goes to Lord Charles’ home and the two grieve together.

Not long after, Kathryn realizes she is pregnant. She keeps the fact a secret. But she wants revenge for Anthony’s death. She contacts the MI-6 agent who arrested her at the airport with a plan to lure Anthony’s killers by wearing the Persian Glories, their obsession, as bait.

In the Elburz mountains, Anthony has been rescued and saved, and endures months of painful reconditioning in a hidden camp. When Anthony finally contacts Lord Charles, it is agreed that he must remain a ghost to Kathryn so that her plan to entrap his killers can succeed.

At the ball and charity event where Kathryn plans to wear the Glories, Rena and Mirdad and Rena’s husband are among the partygoers. How far will Rena go to get her precious Persian Glories? How will Kathryn fare if anything goes wrong? To give away more would do a disservice to this wonderfully spicy novel.

Beautifully written and with a brilliant sense of place and time, the novel sings with elegantly crafted prose, and would make a great movie with all the adventure and intrigue and fast pacing. Susan Angard’s The Persian Glories is a novel to savor and enjoy like the finest of wines.