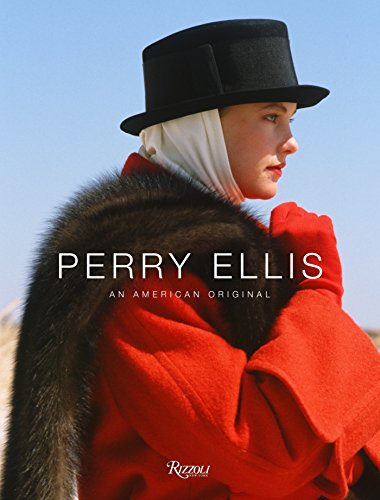 The title Perry Ellis: An American Original can either be construed as a possible misnomer for the book or as one of the great moments of understatement used to describe a title in this genre.

If the reader is a boomer who had been involved in the business of fashion during this era, this book will conjure moments of great melancholy as well as being a reminder that once upon a time there were true designers and so many unbelievable personalities populating that world.

Without being too sentimental, you are reminded that this was a blip on the radar as the man, Perry Ellis, had an extremely brief career, and that he has influenced fashion more than you realize in the decades following his untimely death.

Unquestionably this examination of Perry Ellis’s life has been a long time coming as so many of us in fashion tend to forget so many who were so vastly influential, then and now, but have been swept aside because, after all, fashion is all about what’s new. This lovingly told tale is remembered by those who were there and those who participated in his life at a time when, as Grace Coddington once said’ “I liked it better when fashion came first.” And so it was that when Perry Ellis was peaking and fashion was at its zenith as was creativity in general.

“Perry Ellis has reached that admirable stage in a designer’s career where one doesn’t need a score card to tell the player. It’s not merely a question of turning out best sellers that are recognizably his . . . it is a bit more than that. It is establishing a style that is his own.”
—Bernadine Morris, New York Times fashion critic

This is not a sappy chronicle or diary but an insightful, warmly related dialogue about a designer who was light years ahead of his time and would be considered an exception in today’s world rather than the rule. Imagine what happens when ego is removed from the equation and credit is given to those who have supported you during your career! Then, add to this Southern charm and politesse.

“Perry was a born ‘schmoozer,’ powerfully persuasive but in a charmingly Southern gentlemanly way. His handwritten notes to friends, assistants, editors-anyone who was meaningful to him—were legendary . . .”

As a veteran of the fashion trenches, this book can be viewed and appreciated on multiple levels and by many categories of readers. It can be viewed as cautionary, fairy tale like, instructive, sentimental, and commemorative, but it will jar your memories and enlarge and refresh your perspectives on the topic of American fashion.

Perry Ellis: An American Original is a gift to all who love fashion and the creative process. Consider this a genuine and heartfelt eulogy for one of the great designers of the 20th century.