A Permanent Member of the Family 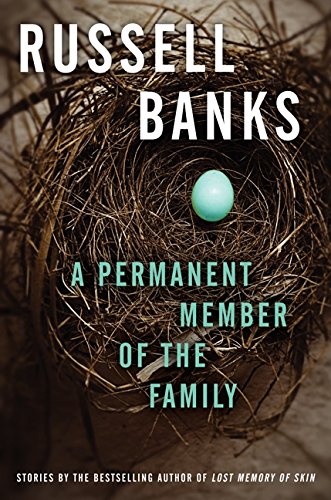 Russell Banks’s new short story collection A Permanent Member of the Family is written beautifully, organized thoughtfully, and like much of his work, terribly unsettling.

The stories in A Permanent Member of the Family are situated mostly in upstate New York and Miami, are about or narrated by middle-aged to middle-aged plus characters of various social classes, and involve loss, divorce, threat, danger, and death.

Most of the stories, particularly “Former Marine,” “Big Dog,” “Blue,” “Searching for Veronica,” and “The Green Door” are unnerving and disturbing. For instance, “Blue” is about Ventana, a middle-aged, working-class grandmother who, for years, has saved up money to buy a used car. While looking at cars at a dealership, this well-meaning, hard-working, woman is accidentally locked in with the dealership’s killer guard dog. The story is tension-filled and heart breaking.

The stories “Searching for Veronica” and “The Green Door” are first-person narratives that end up being confessions of sorts. In “Searching for Veronica” an unreliable woman, who is probably a drug addict, tells a man at a bar the story of her missing daughter and boarder who, if they really existed, were probably junkies too. “The Green Door” is narrated by a bartender who anticipates and witnesses a crime about which he does nothing. Both tales are highly disquieting, bordering on creepy.

Russell Banks’s clear, straightforward, no-nonsense prose as well as the subject matter and some of the characters in his stories are reminiscent of those of Raymond Carver.

Mr. Banks opens his story “Christmas Party:” “Harold Bilodeau’s ex-wife Sheila remarried, but Harold did not, and though he told people there was a woman down in Saratoga Springs he was seeing on the occasional weekend, he was not. Their divorce had been, as they say, amicable. She’d had an affair and fallen in love with Bud Lincoln, one of Harold’s old friends and their Hurricane Road neighbor, and Harold had soon realized there was no way he could prevail against it.”

Russell Banks is particularly masterful at dialogue and narrative voice. He creates credible narrators of different classes and believable dialogue but is never patronizing. Nor does he resort to caricature or cliché. In the story “The Green Door” the bartender narrator describes one of his customers:

“He’s on his second Long Island iced tea when he pops the Texas Hold ’em question. It’s early, a little after four in the afternoon, and the Piano is quiet—the day-trippers from the Fort Lauderdale and Miami old age homes are over at the slots giving away their social security checks and the high rollers like bats in their caves are just waking up—so I give him the short form.”

A Permanent Member of the Family is not a feel-good book, and perhaps best not read in one sitting. Nonetheless, it is an exceptionally well-written, engaging, unified collection.